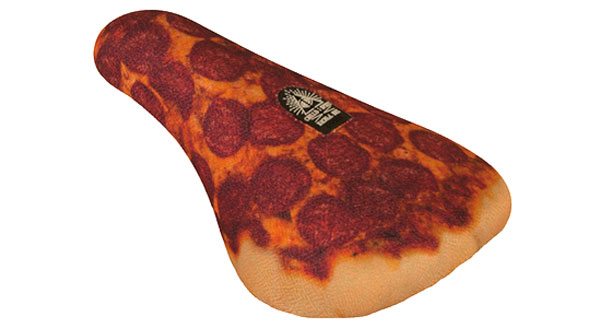 Here’s one that will make you hungry. Macneil and the Chilling Spree crew have teamed up for a slice of pizza. The Pizza Pivotal seat features a pizza print cover and thick foam that gives you plenty of padding for barspins or if you plan on taking a seat. This BMX seat is available now through BMX shops and mail-orders that carry Macneil worldwide.

There’s also the Nick Bullen signature Pizza seat from Subrosa that has been out for a little while as well, if you’re a fan of pizza.

END_OF_DOCUMENT_TOKEN_TO_BE_REPLACED

The Chilling Spree crew just dropped this new mix of footage they had featuring Riley McMaster, Carl Arnett, Drew Morton, Logan Mane, Brandon Van Dulken, James Dean and Jordan Hango getting down on some of their local street spots. This has a pretty chill vibe, but there’s plenty of gold in it!

Damn! The crazy thing about BMX is that there’s a 50/50 chance on everything you do. Either you do it, or shit hits the fan. Carl Arnett sent himself down this huge ledge and the odds didn’t pan out so well!

“Carl Arnett goes for a hail mary of a ledge ride. Doesn’t quite make it, gets really lucky all things considering.
Filmed by Riley McMaster” – Chilling Spree

END_OF_DOCUMENT_TOKEN_TO_BE_REPLACED

Bust out the 3D glasses! The Chilling Spree crew dropped this new edit featuring Greg Flag, Orlando Bloom, Riley McMaster and Brad Hill getting some jib clips with some extra 3 dimensional effects for you to enjoy.

The Chilling Spree crew is back at it again with a fresh new street mix that you’re going to want to check out. Awesome riding, sweet spots and plenty of laughs. Take a peek!

I’ve been so stoked on these Chilling Spree videos. Here’s a fresh one featuring Riley McMaster bringing some real good riding to some of his local spots. Something about his riding just feels unique and refreshing versus the million whips and bars we see in most edits these days.

“Taking forever just to film a half part, might as well just call it a day.
Filmed by Jordan Hango, Carl Arnett & Michael Sharpe
Edited by Riley McMaster
Music: The Muslims – Call It A Day“

“The second edit in the series of the Trials & Tribulations of Carl Arnett. He’s always working for his clips, and all the effort isn’t wasted. Might as well show the blooper reel along side all the good stuff.“- Chilling Spree