Red Bull strapped a camera on Mike “Hucker” Clark and sent him down the hill on the Dreamline course so we could all get a look at what it was like to ride those masssssive jumps. Hit that play button and take a little ride! 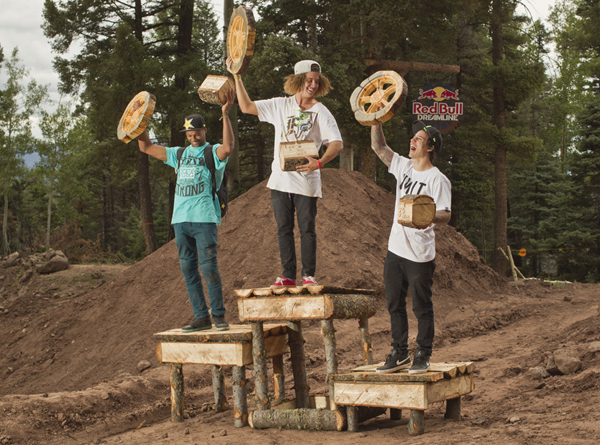 It looks like Pat Casey took him the win this weekend at Red Bull Dreamline! If you saw some of the videos you know how good Pat Casey was riding! Check out the full press release below. Expect footage from finals to surface soon enough.

“August 10th, 2013– (Angel Fire, New Mexico) – The most eagerly anticipated BMX event of the year lived up to big expectations, with massive dirt jumps sending riders, and the level of BMX progression, to new heights. The course, carefully groomed over the past six weeks, boosted riders over 30 feet into the sky and sent Pat Casey, originally attending as an alternate, to the top of the heap in a 12-man final judged by BMX pros including Brian Foster and Corey Bohan.

The course was like no other in the history of the sport. The mountain resort of Angel Fire, New Mexico was carefully chosen due to the unique consistency of the dirt that lent itself to perfectly groomed jumps. After six weeks of meticulous crafting, builder Adam Aloise and his 4-man crew unveiled the top-secret trails to the best riders in the sport. The course spanned nearly half a mile, descending down from the 9700-foot elevation start. With nearly 55 seconds riding from start to finish, riders had boundless opportunities to put tricks on display to the sold out crowd who hiked out to watch.

The 12 competitors who rode in the finals put on a progression session in a two–hour jam format, and were judged by five randomly selected riders who did not advance from yesterday’s qualifiers. Top three finishers Casey, TJ Ellis and Kyle Baldock impressed the judges and the crowd, run after run, with some never before seen combos and general fearlessness on the intimidating course. Nineteen-year-old Casey from Yorba Linda, CA received the adoration of judges and competitors with his combos like a massive truckdriver to double tailwhip on Gargamel (the nickname for the 2nd largest and meanest jump on the course), and a 360 tailwhip to barspin on the gigantic last set. Ellis also impressed with his linking of tricks, including a front flip turndown straight into a cork flip.

THRILLS AND CHILLS
Anthony Napolitan, the event creator, was blown away by the level of riding, saying the competition was “definitely a progression on every level, we probably saw two or three new tricks that have never been done before. The goal has been accomplished. There were at least three times where I got the chills.”

Casey demonstrated that given the right course, on any given day, new stars can rise to the top. “I came here as an alternate, to win Dreamline is just awesome. I love this. These are the best dirt jumps I’ve ridden and it blows my mind.”

Riders were also impressed with a relatively unknown rider Dawid Godziek from Poland who earned a standing ovation for his fearlessness.

Judge and BMX legend Brian Foster shared his amazement. “There was stuff I saw today, I don’t know if it’s ever been done. It’s eye opening. These are the biggest jumps I’ve ever seen in my life, and I’ve been around in a little bit.” Whether a vet or a new fan of BMX, there is no doubt Red Bull Dreamline was a barrage of jaw-dropping moments, all thanks to Mother Nature and the fearless riders who use her as their launching pad.

The event was filmed with some of the most cutting edge cameras ever used in sport, and will be aired on NBC on October 26th, 2013 at 4pm ET, brought to you in partnership with Casio G’zOne Commando, Dodge Dart, and GoPro. The Red Bull Signature Series, the most progressive action sports property in the world, featuring some of Red Bull’s top events including Joyride and Rampage. For more information, please visit www.redbullsignatureseries.com.

Check RedBull.com/Dreamline for the most up to date information and tag #dreamline on Twitter, Intagram and Facebook.

Here’s a little more footage from the prelims during Red Bull Dreamline this weekend! Absolute MUST SEE.

Plus Size BMX dropped this video giving us a look at what went down during Qualifying at Dreamline yesterday! The riding is absolutely nuts and the course is beyond insane. Hit that play button and lose your mind!

“Huge shout to everyone who helped make Red Bull Dreamline another amazing event. Here are a few of the highlights of just went down during Qualys today here in Angel Fire, New Mexico. FInals go off tomorrow…Get a full report on PSBMX.com”

Below is an official press release from Red Bull about qualifying!

“August 9th, 2013– (Angel Fire, New Mexico) After six weeks of building, 20 thousand tons of dirt moved and endless amount of anticipation, the world’s top BMX riders finally got a chance to session arguably the biggest course in BMX dirt history. With vertical descent akin to a 17-story building and a course that traversed nearly a half-mile of picturesque mountain scenery, the 32 competitors had to give it everything to be one of the final twelve to make it to Saturday’s final.

“Everybody rides at such a high level. The bar has been raised now for BMX dirt jumping. It’s only going to get gnarlier. This is exactly what (BMX pro and event creator) Anthony Napolitan wanted. He wanted an event that was nothing but fun, with no stress, just good times and that’s what he’s created here up here in the mountains,” said Mike “Hucker” Clark, one of the twelve finalists going into tomorrow’s competition.

The event was entirely peer judged – the format consisted of two jam session heats, and riders from the other heat gave ranked the athletes on course which they felt most were most deserving of advancing. The finals will continue in the same spirit, with the eliminated athletes drawing draws to see which five will judge the finals.

The final event will be sure to be one of the best sessions the sport has ever seen. The tickets for the event are already sold out, but there will be a chance for everyone to witness the action on NBC on October 26th, 2013 at 4pm ET, brought to you in partnership with Casio G’zOne Commando, Dodge Dart, and GoPro. The show airs as part of the Red Bull Signature Series, the most progressive action sports property in the world, featuring some of Red Bull’s top events including the Vans US Open of Surfing, Joyride and Rampage. For more information, please visit www.redbullsignatureseries.com.

My mind is still absolutely BLOWN by how wild the Red Bull Dreamline course is. Take a look as a few of the guys give the lines a few goes in the first day of practice. All I know is I’d be peeing my pants jumping basically all of those jumps!

Oh… my… god… I went to the original Dreamline contest two years ago and this course is WAY gnarlier… and I didn’t think it could be done. WOW. This contest is going to be NUTS.

“Reality came crashing in yesterday as the riders arrived in Angel Fire, New Mexico, and got their first look at the course that Adam Aloise and his crew spent nearly six weeks building. Excitement levels were running high as they were faced with just how big everything was, followed quickly by a desire to ride it as soon as possible.

Unfortunately they’d have to wait, as rain forced the cancellation of Wednesday’s practice session. The riders were even forced to turn back on their first attempt to see the course when rain and hail battered the mountainside. Thankfully, the clouds parted briefly in the afternoon, long enough for a course walk-through and psych-up session.
enlarge

Several riders were out on the mountain early Thursday morning, armed with shovels to help the build crew erase the minimal damage from Wednesday’s rains. With beautiful vistas and some sets bigger than most of the riders have hit before, the course is a once-in-a-lifetime setting, ready for the best the riders have to offer.
enlarge

The last jump on the Red Bull Dreamline course© Justin Kosman/Red Bull
Look for coverage throughout this week here on Red Bull Bike and watch the full event recap on NBC as part of the Red Bull Signature Series on October 26 at 4:00 p.m. ET/1:00 p.m. PT.” – Red Bull

Red Bull Dreamline is coming up soon and everyone in the New Mexico needs to make it to this because it’s going to be an amazing event! Check out the full press release on tickets for the event and a full rider list! I wish I could make it to this!

July 23, 2013– (Santa Monica, CA) In less than three weeks, one of the biggest courses in the history of BMX dirt will be unveiled to riders and fans alike at Red Bull Dreamline in Angel Fire, New Mexico. With vertical descent akin to a 17-story building, 16,537 tons of dirt, and bulldozers and Skid Steers hard at work, the course will be sure to launch riders, and the level of BMX riding, to new heights.

There are two certain ways to catch the action. For those traveling to Angel Fire, free tickets must be reserved at dreamline.eventbrite.com. Simply register, RSVP and print to guarantee your spot to watch Red Bull Dreamline up close.

For those who can’t make it in person, (or who simply want to see the event through amazing camera angles like the custom built gyro stabilized cable cam), the event will get a national spotlight on NBC on October 19th, 2013 at 5pm ET, brought to you in partnership with Casio G’zOne Commando, Dodge Dart, and GoPro. The show airs as part of the Red Bull Signature Series, the most progressive action sports property in the world, featuring some of Red Bull’s top events including the Vans US Open of Surfing, Joyride and Rampage. For more information, please visit www.redbullsignatureseries.com.

The 32 best riders in BMX, hailing from seven nations, will battle it out for bragging rights and a handsome cash purse. See the full athlete list attached.

Check www.redbull.com/dreamline for the most up to date information and tag #dreamline on twitter/insta/fb