The guys at Cement Face just released their new Summer 2014 catalog giving us a look at all of their new shirt designs and a few of their accessories they have available now! Eben Fischer has done an AMAZING job with the designs for this go around. Check the flipbook and see for yourself!

END_OF_DOCUMENT_TOKEN_TO_BE_REPLACED 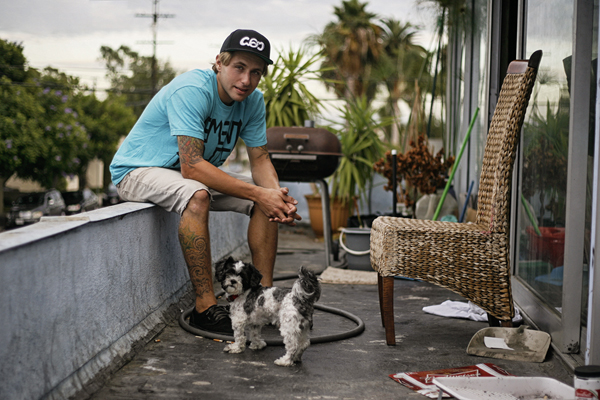 In this day and age it’s pretty difficult to stand out in BMX. It takes a lot of drive and motivation to pave your own path but that is exactly what Eben Fischer is doing. He has been busy behind the scenes working on creating some amazing and 100% original artwork for his company Cement Face aka CEM. He is a true artist that takes pride in his work and regardless of whether or not he is creating a piece for his own company or working on a project for someone like Chris Cole he gives it everything he has and doesn’t settle for less than perfect. It’s that kind of dedication and attention to detail that makes Cemface stand out from the crowd. He spends hours, days, weeks and at times months working and dialing in new designs and although he works for himself and makes his own rules he is truly dedicated to his craft and simply wants to give back to BMX and contribute to the industry that helped shape who he is as a person. I took some time to head down to Long Beach straight to the Cemface headquarters and hung out with Eben and got the chance to pick his brain a little bit. Check out a quick glance into Eben’s world for the 34th edition of TTL.

END_OF_DOCUMENT_TOKEN_TO_BE_REPLACED

The new 2013 Cement Face line is looking so dialed. Take a peek in this new flipbook!

“Here’s the Cement Face early 2013 catalog. Printed copies will be available at Interbike along with our apparel on display at the Tree Bicycle Co booth. Goods currently being sold through Dan’s Comp as well as our web store CemFace.com/Store/. Hit us with a like on Facebook (Facebook.com/CEMface, and follow us on twitter/instagram @cemface. Photo credit Wesley McGrath irisimagery.com Looking forward to seeing everyone at Interbike.” – Eben Fischer

“2011 has come and gone. The journey continues on. To where? Nobody knows, but maybe a look at where we’ve been can give us a clue to where we are going.

Check out these clips of Eben from his time on the bike in 2011. This piece features clips from the Raw Rev X Tree Collaboration, the Tree Summer 2011 DVD and some unseen footage from Eben. Enjoy!

Eben Fischer and Morgan Long put in some team work at Ramp Riders this past winter (and just being released now) for their new project called Cement Face.

One thing about BMX that is awesome is the endless creative outlets you can take it. Eben Fischer is one of those real creative riders who also has some serious talent in the art department. When he isn’t busy riding for Tree or air brushing some work on a hot rod, there’s a good chance he’s working on his newest project, Cement Face. I figured it would be a good time to find out what’s new and learn a little bit more about CEM. Let’s take a look at what Eben has cooking…

Tree compiled a bunch of old photos of Eben Fischer that were never used for anything. They had Eben write up some words about each photo. Take a peek.