We’re throwing our Annual Salute to the 4th contest at the Silverlake Skatepark in Rochester, Minnesota! 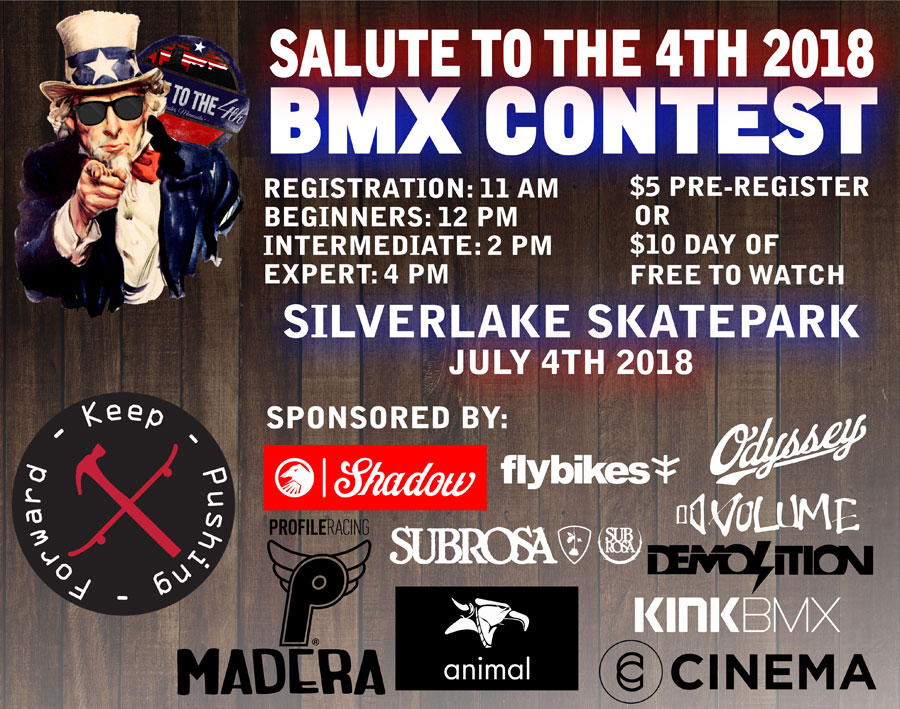 It’s that time of the year again for our annual Salute To The 4th BMX contest at Silverlake Skatepark in Rochester, Minnesota! This contest goes down with a Skate contest and is apart of a bigger event that has live music, food trucks, a massive car and motorcycle show, kids soccer and football camps and more!

Registration and practice kicks off at 11 AM with a $10 Entry fee the day of, or you can save a few bucks and PRE-REGISTER for only pay $5 RIGHT HERE!

Looking for a good time? The Big Marsh BMX Jam is going down Saturday, September 16th! 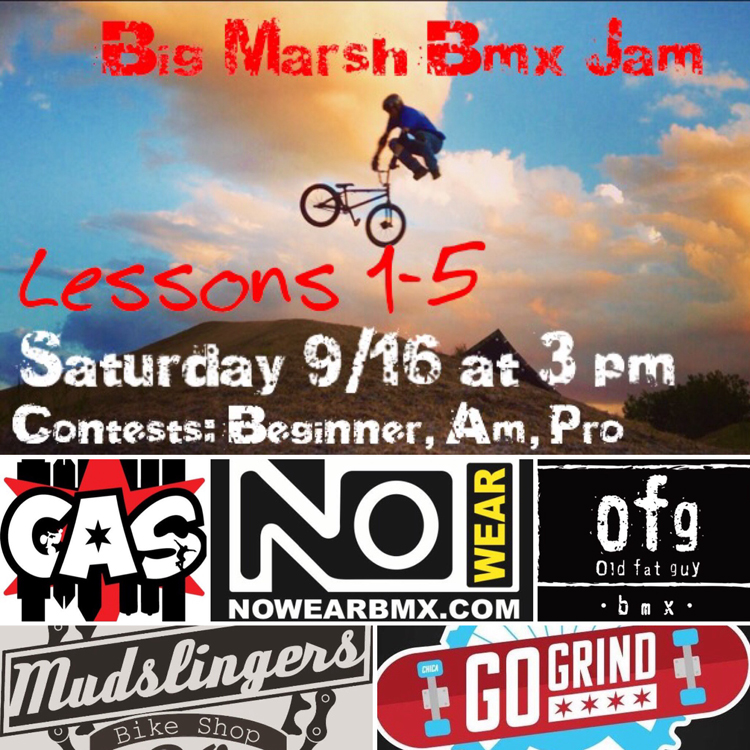 Are you in the Chicago area? If you are, you should definitely plan on hitting up the Big Marsh BMX Jam is going down Saturday, September 16th at the Big Marsh Bike Park! The event will have lessons for the riders just getting into BMX from 1PM – 5PM, along with a contest for Beginner, Intermediate and Expert classes. If you’re looking for a good time, this is the place to be!

Below is a map of the location! 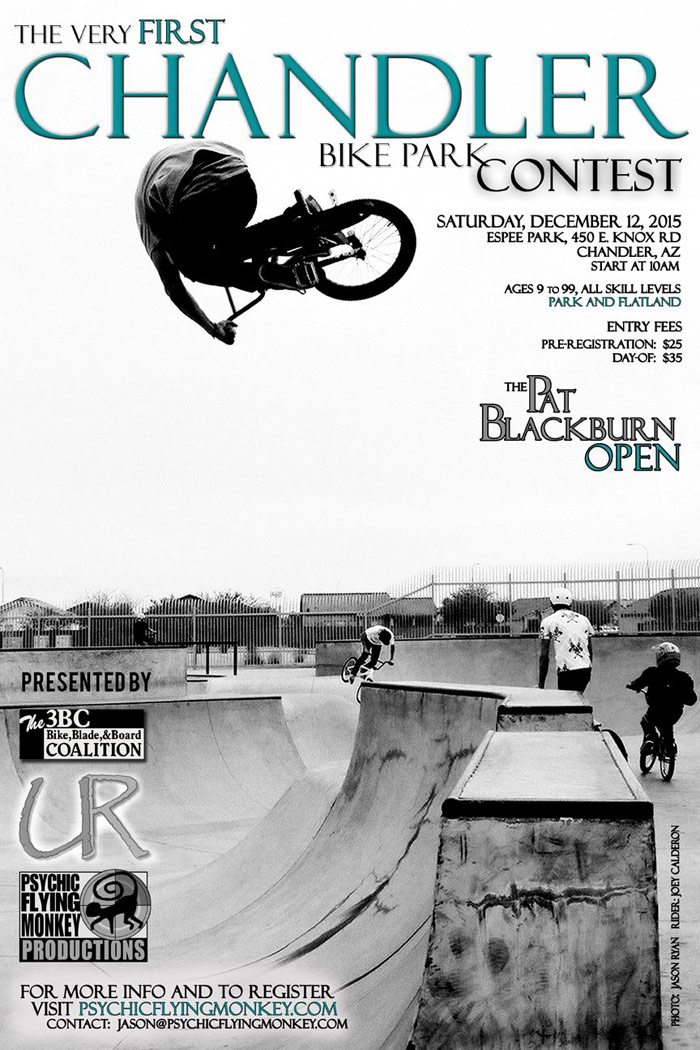 If you’re in the Chandler, Arizona area on December 12th, this is one for you! There’s a contest going down at the Chandler Bike Park and it’s bound to be a super good time. Get the full details below!

“Although it opened in 2007, Chandler Bike Park has never hosted a legitimate contest…until now. The Bike, Blade and Board Coalition, Urban Recreation and Psychicflyingmonkey Productions are teaming up to organize the first ever BMX freestyle contest at one of the raddest bike parks in the United States.

The Bike, Blade and Board Coalition (The 3BC) is a grassroots organization based in Arizona that began organizing BMX riders, skateboarders and inline skaters, their parents and supporters in 2003 to get concrete parks built in which all non-motorized, wheeled users could legally ride. Led by Pat Blackburn, 3BC captain for Chandler and BMX racing coach, a movement developed in Chandler that led to the design, build and opening of the Phoenix area’s first bike park on May 5th, 2007.

Urban Recreation is a young startup whose mission is to promote and enhance the action sports experience through education, and community engagement. 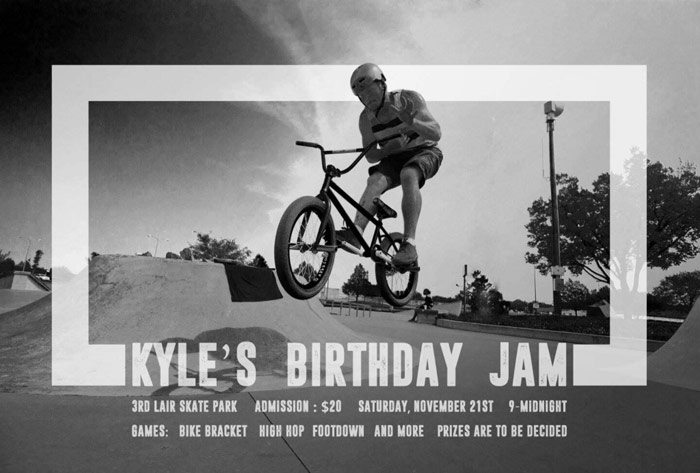 What are you doing on November 21st? Well, if you’re in the Minnesota area, you should hit up 3rd Lair for Kyle Mileski’s Birthday Jam at 3rd Lair. This isn’t exactly a birthday party, but more of an excuse to have a good time. They will have the whole park rented out for the night and should have a bunch of prizes for different jams they’re throwing. Full proceeds for the event will go toward funding the “MN Nice” DVD that’s in the works as well. Get stoked.

END_OF_DOCUMENT_TOKEN_TO_BE_REPLACED 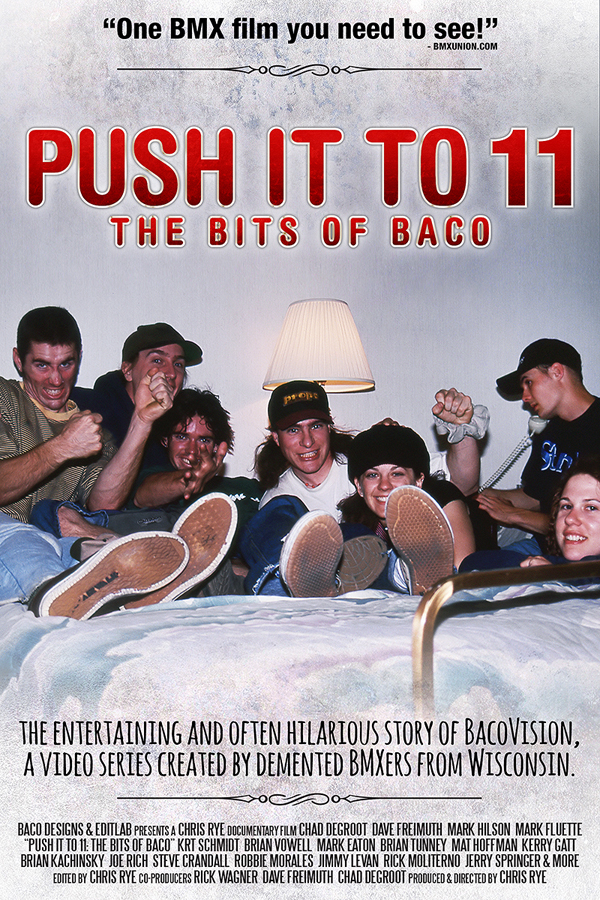 The legend of BACO continues! The other day I got a little sneak preview of the new “Push It To 11” documentary about all 10 of the BACO videos that features footage from the videos along with interviews from the entire crew and more. If you couldn’t tell by the quote on the top of this… I absolutely loved it and highly suggest you check it out when it becomes available in August! They will be doing a premiere in New Orleans on August first, so hit up BACODesigns.com for more info!

“We worked on “Push It To 11: the Bits of Baco” for 12 months and you’re gonna love it. Premiering in New Orleans on August 1st, and part of the upcoming Baco Box Set. It will also be coming to iTunes in mid-August. http://bacodesigns.com/ for more info.” 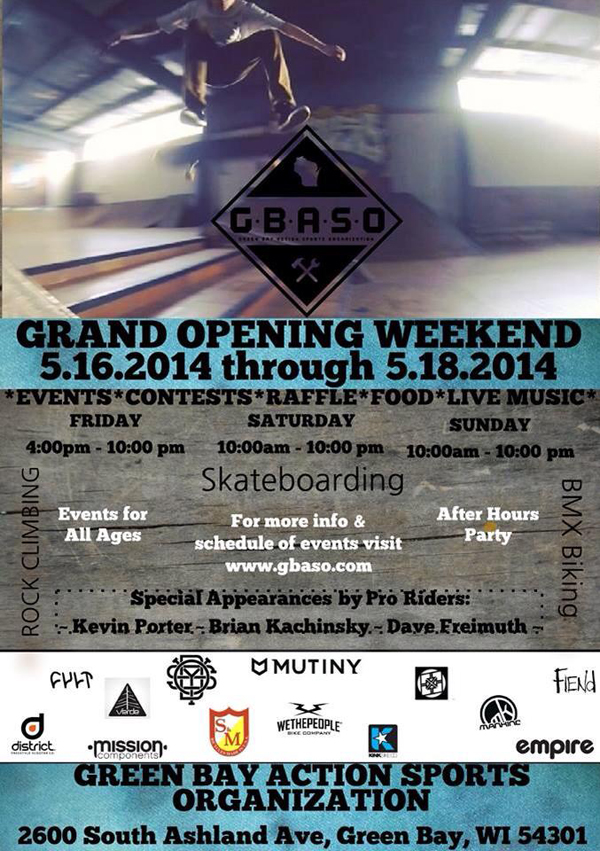 Here’s some rad news. Last year it was announced that Lake Owen Camp had been sold and would be shut down and gutted by the new owners. It was some unexpected news and a total bummer, until now. It looks like the old ramps have found a home at the new Green Bay Action Sports Organization Skatepark! The grand opening is set for May 16 – 18th with Kevin Porter, Brian Kachinsky and Dave Friemuth all making appearances to get the party started! If you are in the Green Bay, Wisconsin area those days, I highly advise you hit this up! 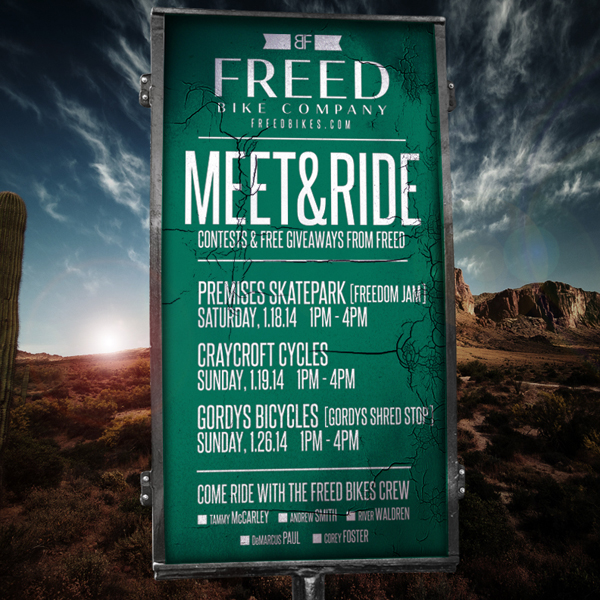 The Freed Bikes crew will be busy later this month. On January 18th, hit up the Premises skatepark for the Freedom Jam to hang out and ride with their team and get free goodies. Then on Sunday, January 19th they will be at the Craycroft Cycles shop and Sunday, January 26th they will be making a stop at Gordy’s Bicycles! This will be a good time, so make sure if you are in Arizona to try and make it to these stops! 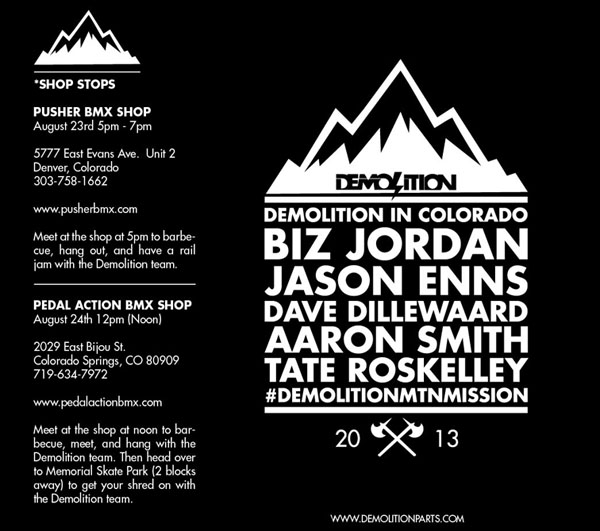 The Demolition guys are back on the road! This time around they’re spending a few days in Colorado and will be hitting up a few shops Friday and Saturday! If you’re in the area of either shop, I highly suggest you get to this!

“The guys headed up to Colorado to ride, film and shoot some pics are also going to visit Pusher BMX and Pedal Action BMX shops (Friday and Saturday) to bbq, hang out and ride with the locals. If you’re in the area, be sure to stop by to get in on the free food, giveaways and pound a few cold ones with the crew. All the info is above in the flyer. If you have any further questions, please contact each shop listed. Click flyer to go BIG. See ya’ soon”