It’s that time of the year again for the annual Frostbike show at QBP up in Bloomington, Minnesota. We made our way up the icy, bumpy highway that was covered from the snow storm earlier last week to take a closer look at what was going on in the QBMX section. First up, we caught up with Nuno and Michael from Odyssey to see what they had on display. Let’s take a look!

END_OF_DOCUMENT_TOKEN_TO_BE_REPLACED 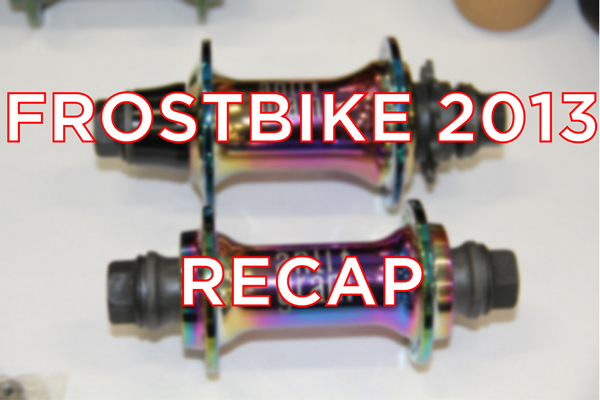 Well, another year has come and gone and this years Frostbike is done until next winter. This year definitely brought a good number of new products to check out from all the brands which was nice. There’s definitely that chance that not much has changed since Interbike in September, so the trip up this year was more than worth it. I’ve gone through all the photos from all the booths and posted them up for you to check out now. Below you can find links to each booth! Give it all a look.

Deluxe and And Forks

I’d like to give a shout out to all the brands who had people at their booths to give me the low down on all the latest and greatest from each brand. I’d also like to thank QBMX for letting me come in and check everything out! Until next year!

The final stop at Frostbike. Here’s a quick look at what FBM had on display this past weekend. They had a fairly small setup, but as always, some quality made in America goodness like their Berzerker frame. Let’s take a look!

END_OF_DOCUMENT_TOKEN_TO_BE_REPLACED

Keeping the party going… I rolled on over to the Stolen booth to see what was new with David Wootten and to check out what they had on display. They’ve got a few fresh items for you to check out, so let’s get into this!

END_OF_DOCUMENT_TOKEN_TO_BE_REPLACED

I made my way over to the Tree Bicycle Co. booth to see what Sam was up to and to take a look at what he had on display. As always, Sam brings plenty of unique and well designed products to the table, so let’s get a closer look!

END_OF_DOCUMENT_TOKEN_TO_BE_REPLACED

Next up we’ve got the Odyssey booth. This year they had Nuno Oliveira and their new sales guy, Michael, manning the booth. As always, Odyssey has some fresh products brewing and they even had a few unseen items to check out. So let’s get into this already!

END_OF_DOCUMENT_TOKEN_TO_BE_REPLACED

Making the rounds, I stopped by the Fly Bikes booth to say what’s up to U.S team manager, John Povah, and take a look at what they had on display. Fly have always done an amazing job to focus on quality and aesthetics of things, so it’s always a treat looking at their stuff in person. They’ve got a few changes for 2013 as well, so let’s take a look!