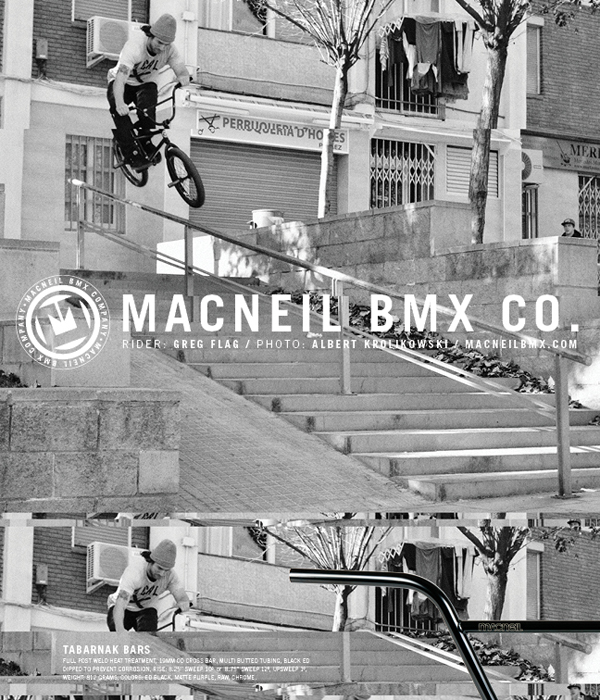 Here’s a look at Macneil‘s latest print ad featuring Greg Flag and their Tabarnak bars. This can be found in the new issue of Ride BMX.

Macneil‘s Greg Flag and Taylor Elvy get a rad setup going in their back alley for this quick new edit. Definitely worth a look!

Last September, Macneil‘s Dillon Lloyd, Greg Flag and Andrew Lazaruk drove from Vancouver down to Las Vegas for Interbike. While they were there, they got a bunch of riding time, and I’m assuming a bunch of Taco Bell… and the mess that comes with that.

“In early December Taylor Elvy, Dillon Lloyd and Greg Flag took a flight from Canada to hit up the Vans Rebel Jam in Holland.
Following little sleep and even less practice, Dillon finished 7th in street.
After a fairly docile couple of days living it up in Holland the guys headed to the UK for three days, en route to their final destination, Barcelona, where they would spend the next fortnight filming with ‘The Northern Embassy’.

The crew spent three days in between their travels alongside filmer and UK rider Mike King hitting a few local spots and skateparks in and around Brighton, including the Seventies warehouse and even caught a few hours in London, as well as spending some time with the other UK guys Ben Green, Vinny Mayne and Billy Cooper doing some sightseeing and experiencing a touch of the Brighton nightlife!

Song: Pictureplane – Real Is A Feeling

Dang. Wednesday is proving to be a real good day for edits. Here’s a fresh new one featuring Macneil‘s Greg Flag and Andrew Lazaruk that’s worth a look!

Greg Flag has a fresh bike check up on the Macneil site. You can check out his sturdy unit by clicking here.

The Northern Embassy teamed up with some of the Macneil crew for this edit. Check out Greg Flag, Dillon Llyod, Andrew Lazaruk and George Bolter riding some skateparks, street spots and trails.