GT have uploaded Parker Heath’s section from the “Can You Film This?” video!

GT Bicycles keeping the sections from their “Can You Film This?” video that was released last year. This time around they uploaded Parker Heath“s section that’s packed with wild moves from street spots to ramps. Parker always delivers, so you already know this section is too good to iss.

“Diving down huge rails, blasting transitions, and some never seen before combos… Parker Heath’s section from Can You Film This? ticks all the boxes. After initially premiering CYFT on OurBMX.com, we’re now releasing the individual sections here.

GT have started uploading the individual sections from “Can You Film This?”!

GT Bicycles have started uploading the individual sections from their “Can You Film This?” video that was originally released back in July. First up we have the intro and Julian Molina‘s banger of a section where he crushes spots galore. Julian never fails to blow our minds showing us what is possible and what he’s capable of. So good.

Watch the full“Can You Film This?” video here!

“After initially releasing our new full-length video, Can You Film This? on OurBMX.com, we’re now releasing the individual sections here. Let’s kick it off with the intro and Julian Molina’s part.

Fun Facts: Other than one extremely productive day in Los Angeles with Jeff Zielinski, the bulk of Julian’s part was filmed in and around Austin, Texas, with Stew Johnson. For his soundtrack, Julian requsted the track “Miseria” from Medellin, Colombia, based punk band Los Suziox.

2022 is just about a wrap, and everyone is starting to take a look back at all the wild riding and good times that were had! The crew over at GT have gone through all their videos from the past year and put together this highlight reel! Check out what they put together, then you can check out all of their videos in full down below!

“The past year has been a great one for us. From supporting the steady return of amazing events, the roll out of fun product and team rider projects, and the bumping of two members to the Pro ranks with surprises for both Mason Ritter and Julian Molina. The team news didn’t stop there, and we were fortunate enough to add both UK legend Tom Justice to the Pro squad and female rising star and the 2022 Bloom Rookie of the Year, Bethany Hedrick, to the GT BMX family. Before we kick start 23, take a moment to watch back over our 2022 highlights! Checkout the full videos below!” – GT

END_OF_DOCUMENT_TOKEN_TO_BE_REPLACED

GT dropped a new Dan Conway video for you to check out!

It’s always a good day when Dan Conway has a new video to check out! Here’s his latest for GT Bicycles that’s packed with heavy moves from street spots, and a few park clips, with a ton of wild grinds, gaps, drops and much, much more. Dan definitely delivers with this one, so get on that play button and enjoy!

“Lock up your rails and ledges, Dan Conway is on the loose! We’re loving this new one for GT. You can always count on Dan Conway to bring the party – especially in the streets!

GT and Pacifico teamed up for a Performer 29″ collaboration bike! 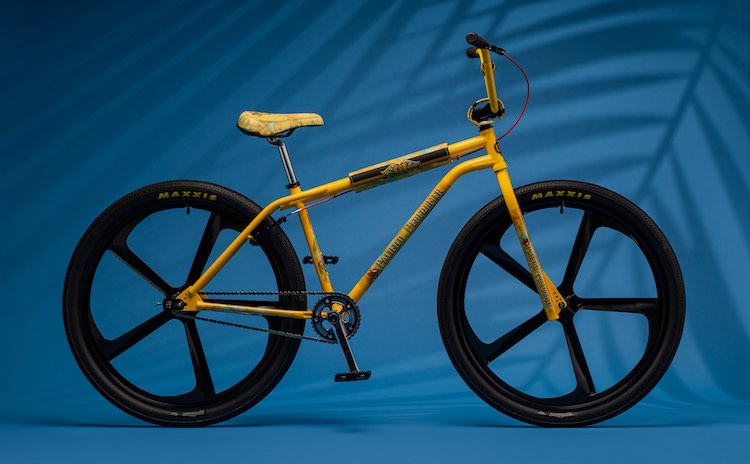 Here’s a new collaboration bike to check out! GT Bicycles have teamed up with Pacifico Beer to do a limited edition collaboration Performer 29″ bike. The bike is loaded with custom graphics, a matching seat and pad set, a custom number plate (not in the photos), mag wheels and much more. These bikes are limited edition, but you can get more details and even pick one of these up or $1015.00 right here. Check out a few more photos below!

END_OF_DOCUMENT_TOKEN_TO_BE_REPLACED

Earlier this year, GT Bicycles brought Gustavo Balaloka and Duda Penso over from Brazil where they spent their time bouncing around to events and riding a ton of amazing parks, and checking out some sights along the way. Here’s a 10 minute video giving you a look at what they got into with some insights from both of them!

“Two of Brazil’s finest, Gustavo Balaloka and Duda Penso, have the trip of a lifetime to the United States in search of fun, inspiration, and big ramps. The duo spend two months riding some of the best parks on the East Coast, getting to session with countless pros and soak up endless new experiences along the way.” – GT Bicycles

Tom Justice is now doing it for GT Bicycles!

Here’s some awesome sponsor news for you! GT Bicycles have added Tom Justice to the team. This was definitely a surprise since he’s been riding for Mafia Bikes for 8 years now, but this couldn’t be a better fit for one of the best ramp riders in the U.K. Tom always delivers with amazing riding filled with huge airs and style for miles that is sooooo fun to watch. Check out the quick video GT dropped to bring the news where Tom crushes the Source Park bowl! We’re stoked to see what this new deal means for Tom. Hopefully we see him all over the place.

Check out the Fueler 22″ complete from GT!

GT Bicycles have released their Fueler complete in a new 22″ size for the riders out there that like having a little bigger wheels and some extra room to work with! Here’s a fresh promo featuring Mason Ritter putting the bike to work out in Pittsburgh going from trails to The Wheel Mill and street spots to show just what it’s capable of! Take a look!

“Whether you’re looking for a roomy bike to cruise or aiming to shred, you can stretch out the fun on a Fueler 22. Mason Ritter shows you how…

The Fueler 22 has the same full Cr-Mo frame, fork and handlebar build as our highest end BMX models. The 22-inch wheels allow a rider to roll faster with more stability than traditional 20-inch wheels while keeping the same playfulness you’ve come to expect from a modern BMX bike. While bigger riders love these bikes, they’re also the perfect rig for any returning rider who thinks a 20 is might be too small and a 24 is for the old dudes.