Here’s a BMX video we had sent through from the jam that the Grindworks BMX crew threw up in Binghamton, New York the other weekend. Although it looks like the weather wasn’t playing in their favor, the crew ended up making the best of it and had real good day. This video is pretty long, but it covers everything from the first session in the morning that was wet, cold and snowy at the first skatepark, then they cruised a little street, finishing up at Derek Nelson‘s HCS Skatepark.

Filmed and edited by Andrew Vargason

“GrindWorks BMX Jam in Binghamton, NY happened on April 9, 2016. This video captures the majority of the day and the good times that were had, even though the weather was less than optimal. Thanks to everyone that made it out and helped make it successful. Also, thanks to all the sponsors that donated to help out.”

END_OF_DOCUMENT_TOKEN_TO_BE_REPLACED 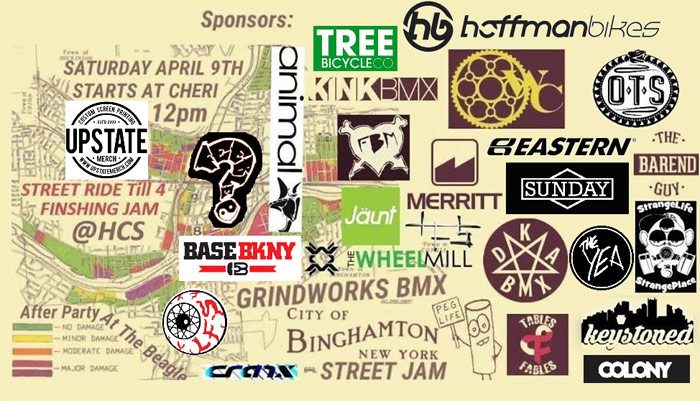 What are you doing on April 9th? If you’re near Binghamton, New York, you’re going to want to be at the Grindworks Street jam that’s going down from Noon to whenever the party decides to call it a night. This will kick off with a street ride, then head to the HCS Skatepark for the session and after party! You can get the full details on the Facebook Event Page!

END_OF_DOCUMENT_TOKEN_TO_BE_REPLACED

You know the saying… Better late than never, right? The Your-INN guys had some footage they were sitting on from a trip they took 2 summers ago to HCS Skatepark. They decided instead of letting the footage go to waste that they would put it together for us all to enjoy. Hit that play button and take a peek!

“We filmed this when we were supposed to be going to an FBM contest at HCS skatepark but by the time we got there it was basically over. We got a lil riding in the next day before heading back down.
Loudest Grinds Ever!
Featuring: Mike, Goya, Piff, & Oba
I think this is the first thing I ever filmed with the T2i that just died.“

This video might just very well have one of the goofiest sound tracks ever for it, but I can’t help but laugh about it. I guess I should have expected it to get weird with the title… Either way! Check out Derek Nelson along with a bunch of skateboarders getting down at the HCS Skatepark in this video that Johnny Hero pieced together.

“Filmed over the course of a few days. Edited by Johnny Hero
HCS is a skatepark near Binghamton, NY. We build all the stuff there ourselves, and we try to only build things that we haven’t seen/skated before. Lately, Derek has been really into making ramps that are sort of skate-able art. Death Machine skateboards are made and sold here, along with a hundred other DIY projects. It’s only $6 to ride all day, stop down.
More here: facebook.com/Hcsskatepark
and here: hcsskatepark.com/“