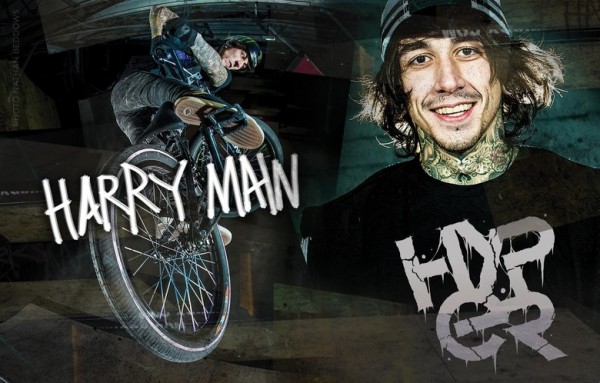 Harry Main has chosen to leave Failure and join the Hyper squad. Check out the press release below for statements from the Hyper TM, Hyper riders and Harry. Interesting side note, there was never a statement regarding Mike Spinner’s status with Hyper changing, but he’s no longer listed on the roster in the press release.

“Hyper Bike Co. is proud to announce that Harry Main has signed a multi-year deal with Hyper. Harry Main joins the 2014 Hyper Pro team of Scotty Cranmer, Logan Martin and Ryan Taylor.
Matt Bischoff, Hyper Team Manager said: “Harry is one of the best riders on the planet, putting out some of the most progressive web videos through his Harrymania series and winning countless competitions and awards.
Harry’s constant drive and motivation is like no other rider I have ever worked with. Harry is a true professional on and off his bike and I am honored to be working with him.”
Here is what Harry Main had to say: “So excited to start a new chapter with Hyper. I’ve been working close with Matt Bischoff, the Team Manager of Hyper and the CEO, Clay Goldsmid. All three of us have massive ideas of where we want to take things. To be involved with a company with so much history that started in a basement, to selling BMX bikes to everyone ranging from the local bike shop to your mass retailer stores… I feel I am in an excellent position starting 2014 as a Hyper BMX rider! Also we are making a new improved Hyper Mainiac so stay tuned for that! Once again another progressive move for my career and stoked to be working on some new stuff with Hyper! Thanks.” –Harry Main
“Hyper really has raised the bar this year, all of us who are a part of the brand know that this is only the beginning of what’s to come. Having Harry as the new addition to the team is massive. It’s good to have such a close friend a part of what Hyper has planned for us for many years to come. Welcome to the Team Brother!” –Ryan Taylor
“Having Harry Main on board is a big move for Hyper. 2014 is going to be huge.” -Scotty Cranmer”

Hyper‘s Dan Mentzer recently spent a day at the Reid Menzer memorial skatepark stacking some real good clips. Here’s the video that came from the day for you to check out. Give it a look!

Here’s the first video coming from Ryan Taylor for his new sponsor, Hyper, that JC Pieri put together. Definitely check this out!

“Ryan Taylor spent some times in the south of France
we filmed some clips during the Vans Kill the line for HyperBike Co.

Dan Mentzer is now doing it for Hyper Bikes! Check out his welcome edit with some proper street and park riding to bring the news!

Hyper‘s Clay Goldsmid spends some time riding at The Compound for this new edit. That backyard ramp setup looks like a super fun spot to ride.

Little ripper Harry Bartter has picked himself up a few sponsors. Here’s his welcome edit for both companies. It will be cool to see where this kid goes.

“Harry was recently added to both Hyper and Impurity Bike companies, which is fairly impressive for his age (14). He is currently running Hyper M.I.A frame loaded with Impurity parts. Filmed on and off over the last 3 months.” – Russo Projects