Dan Conway and Joel Barnett were on the way to Kansas for a Fit team trip and couldn’t resist getting some time in at the Louisville, KY Skatepark. For a pitstop session, that’s some pretty sweet stuff.

Oh hell yeah! It looks like Joel Barnett is back! That and I still can’t get over how good Cranx looks!

“In December 2011, Joel Barnett had surgery to repair his torn ACL on his right knee. While he was down and out, Fit Bike Co. help him put together a brand new ride to get him rolling again as he healed. During the same period, Cranx bike park sprung out of the ground and with the new ramps right down the street, he began the long process of building strength up in his knee again. This footage is the most recent riding that we’ve captured as he begins to fully recover from the surgery.
Joel would like to thank Van Homan and Stew Johnson at Fit Bike Co., Dale Cruce at Cranx Bike, Brien Kielb at Sparky’s, and Nuno at Odyssey”

“Korey and I filmed this at East Shore Skatepark in Ithaca one late night back in April/May (while I still rode for FBM). Due to laziness and other snags, we forgot about it and that was that. I just found the files and decided to piece it together and upload it, even though I no longer ride for FBM. It came out pretty good and I just feel that everyone should have the chance to watch it.
Cheers!” – Joel Barnett

Joel Barnett has been getting the hook up from Vitamin Water lately, so he wanted to show his appreciation by putting together this edit for them! Awesome!

Joel Barnett spent some time filming with Korey Kryder in Syracuse, New York and ended up with a ton of real good stuff. Check out Joel’s new edit and then hit the FBM site to check out a quick Q&A to see what’s new with Joel. 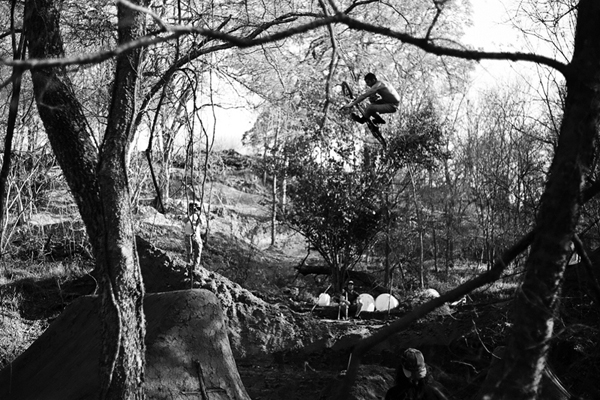 Joel Barnett took a whole bunch of real rad black and white photos while on Megatour with FBM. You can check out these photos over on the Least Most.