Curious what a day for Larry Edgar is like? Here’s a video where the Our BMX dudes followed him for a day as he cruised his yard, rode the local pump track, hit up Pat Casey‘s yard, played a little COD, drove some cars and more! Hit play and take it all in. It looks like it was a good day to us!

“Larry and I have been talking about meeting up and spending a day riding and doing hoodrat things and I decided to finally make it happen. No pressure, no real plan. I hit up Jeff Z to come shoot photos and we just went out and rode the stuff that he normally does. We were both hoping to do a bit more with his off road truck, but it wasn’t running at the moment. And, it was also surprisingly hot that day, so the heat soak happened quick.” – Our BMX

Here’s a video we did NOT see coming. The Marshmello Youtube channel just dropped a new video featuring Larry Edgar and the world famous DJ catching some riding time at a skatepark out in California. This is a pretty wild considering Marshmello’s Youtube channel has 44 million subscribers, so that’s going to put BMX and Larry in front of a lot of new eyes. We’re not sure how this all came about, but it turned out pretty rad. Hit play and check out this video since it’s loaded with some great riding and we’re sure some of you will be digging the music, too.

What do you think of the video? Who would have known the Marshmello could throwdown on a BMX bike, haha.

Here it is! The finals highlights from the Monster Energy Street Style BMX contest that went down in Texas last weekend! This is just over 30 minutes of raw footage showing all the highlights from the 16 riders that made finals, so there’s a ton to take in, and plenty of great riding to see. Hit play and take it all in!

“Downhill (and uphill), trailers, containers, barriers, and some wood to make it all work… Monster Energy’s Street Style BMX. Here’s highlights from the 16 man final…” – Our BMX 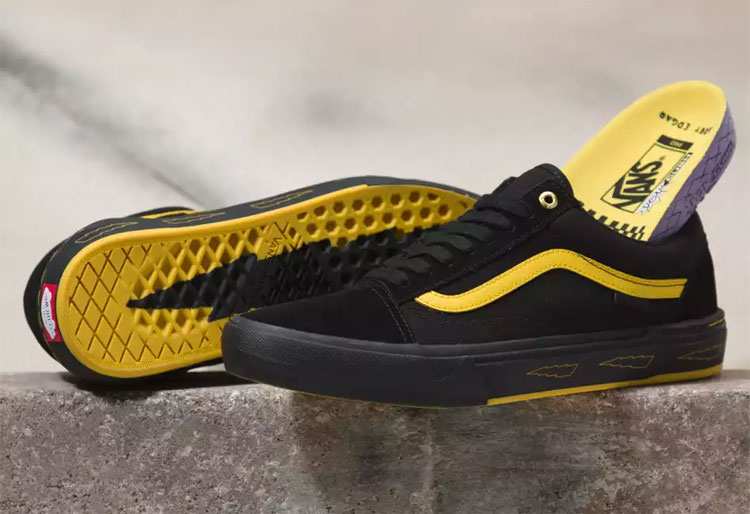 Here’s some news that we’re sure a bunch of people will be stoked on! Vans have released their latest Old Skool Pro Colorway! This time around they’ve teamed up with Larry Edgar on a shoe, snapback hat and long sleeve shirt in a Black and Yellow color combo with some unique artwork that fit Larry’s style well! The shoe utilizes the Old Skool Pro BMX model that we’ve seen for Kevin Peraza, Matthias Dandois and Ty Morrow so far, with Larry’s own personal touch on the insole and the midsole of the shoe. The Old Skool Pro also features it’s unique sole that mixes the classic Waffle pattern with a mix of a few other patterns and a harder rubber to give you plenty of grip on the pedals and resist the wear and tear! Check out more photos and full details below!

The Larry Edgar Signature Old Skool Pro Colorway is available on the Vans Website for $70 now and through BMX shops and mail-orders like Source BMX that carry Vans worldwide now!

END_OF_DOCUMENT_TOKEN_TO_BE_REPLACED

Last weekend during the Monster Energy Speed and Style contest in Las Vegas, there was a best trick contest that went down where the guys were able to try and throw down their best moves anywhere on the course from the roll ins to the jumps, transfer lines, etc. Here’s a look at what went down in this laidback contest! Check out more highlights from the actual contest below!

“You can check the full highlight vid of the Monster Speed & Style event, but I figured everyone wouldn’t mind a raw cut of the Best Trick Jam. Not the biggest crew of riders, but the unique course opened it up to some atypical “best tricks” that you won’t find at normal dirt events.” – Our BMX

The Toyota Triple Challenge went down in Las Vegas this weekend and there was a bunch of guys that turned out for the contest to throw down. Here’s a video giving us a look at all of the highlights from the best trick contest. Plenty of bangers and a few creative lines. Looking forward to seeing what went down during the contest as well!

The second stop of the 2019 Vans BMX Pro Cup went down in Stuttgart, Germany, and some of the best BMX riders in the world turned out to throw down. With over 70 riders in the qualifiers, that list narrowed down to the finals, and then the podium where Jason Watts, Sergio Layos and Larry Edgar found themselves. Here is a raw cut of footage giving you a look at Jason, Sergio and Larry’s runs that landed them in that top spot! These guys absolutely CRUSHED IT.

Filmed and edited by Philip Kolsch


Note: This site contains affiliate links and we could recieve a small comission that supports this site if you were to make a purchase on their websites.