If you have ever doubted that BMX is just as much of a mental game than it is physical, watch this video of Bjorn “Bommel” Mager having a serious struggle getting this gnarly luc-e to over on a mini ramp to mini ramp transfer for Mankind. I can only imagine how pumped he was to get that trick done after that ass kicking.

Head on over to The Merged to get an exclusive first look and all the details on the new “Swagger” collaboration frame that Mankind has teamed up with German mail-order, Parano Garage on! This looks damn good. 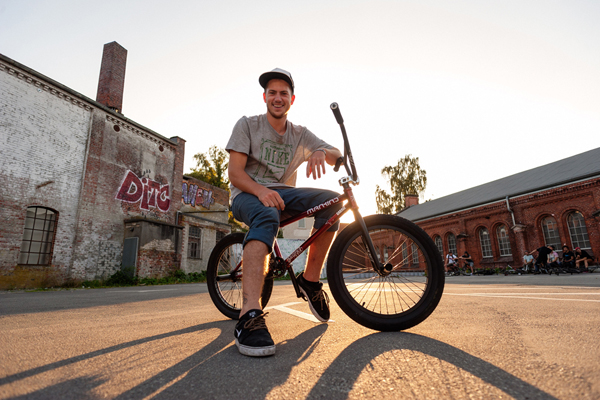 It looks like Germany’s Daniel Tune is now doing it for Mankind! Check out a few words about the news then Click Here for a closer look at his setup!

“We would like to welcome Daniel Tünte from Telgte near Münster, Germany to the Mankind Bike Co. team. We are more then proud and happy to have Daniel on the team as we know what an amazing, highly talented rider and an overall smart and great dude he is.
Daniel has received his new Mankind ride two weeks ago, which is including a prototype of the new upcoming Mankind X Parano Garage “Swagger” Frame.We are working with Daniel on a welcome edit right now, which will be released around end of November.
So, more to come your way from Daniel Tünte and Mankind Bike Co. soon. Stay tuned!“

Holy… hell. Bjorn Mager absolute KILLED it in this promo video for his signature Action frame from Mankind! This is one video you do NOT want to miss because he crushes everything he touches on the streets and skateparks he made his way to. Enjoy!

“I’ve been team mates and good friends with Bommel now for about 6 years and over that time we have spent countless hours together, travelling to contests, filming, and hanging out in bars and clubs all over Europe. Last year Bommel took on the job of team manager for the mankind team, and this year after 10 years of competing in contests all over the world, he made the decision to stop riding in contests all together, to some people this might be a sign of slowing down, but I will assure you this edit will prove otherwise, if there is one edit you watch today make sure it’s this one. You won’t be disappointed.” – Isaac Lesser

The Mankind team along with a handful of friends like Grant Castelluzzo and Erik Elstran were over in Berlin for a little while when they decided to throw a street jam. This video gives you a look at all of the spots they hit and the riding that went down. You gotta check this one out for sure!

“Berlin is an amazing place especially in the summer and it turned out quite a lot of bmxers had chosen to spend some time over there checking out the city and riding the street spots. Berlin local and tour guide Bommel came up with the idea of a street jam while there were so many riders in town so he got in touch with his sponsors relentless and mankind and got the ball rolling. On the morning of the jam a heavy crew was met up and began to cruise about the city, hitting up spots, enjoying the weather and having a laugh, while being kept hydrated by a relentless truck wich followed us from spot to spot. Everyone killed it all day, and it is an amazing feeling cruising round a city with so many riders. Check the edit for what went down and thanks to Bommel and Relentless Energy Drink for making the day possible. Text: Isaac Lesser
Instagram: @mankind_bike_co
Startring: Jeff Klugiewicz, Rob DiQuattro, Isaac Lesser, Martyn Cooper, Daniel Juchatz, Björn Mager, Grant Castelluzzo, Arik Elstran, Luca Demarco, Tom Milham, Devin Tyler Rembold, Angelo Milius, Mike Hinkens, Alex Bär
Edit: Mirko Wakat | mirkowakat.de/#!/main
Pictures: Philipp Görs | mankindbmx.com/?p=3594
Music: Arash Mosaken | facebook.com/djmosaken”

Kim Moreno is now doing it for Mankind over in Germany! Check this rad welcome edit loaded up with some dialed riding. This guy is not scared to chuck those bars, that’s for sure!

“We would like to welcome Kim Moreno to the Mankind Bike Co. crew as our new German flow team rider. The street shredder has already built up his new bike, which is a Mankind Forward Frame 21.0″ in matt black. Kim lives in Heusenstamm near Frankfurt and is also riding for the 2four7 local bmx shop. We met up with Kim for two days in Frankfurt to film this edit at his local spots. We are more than happy that Kim is part of the MK family from now. Enjoy his welcome edit!!”

Isaac Lesser caught up with Luke Duffy at the Canvey skatepark for a session the other day. Luke pulled out the camera while Isaac went to work on stacking clips for this new Mankind edit. These ramps might be a little slick, but Isaac crushes it!