I was watching this thinking I had posted it the other day, then I remembered they premiered this at NORA Cup, haha. But that’s beside the point! Dan’s Comp dropped this teaser for the DVD they are working on that you already know is going to be nuts due to the stacked team. Check it!

Matt Wilhelm has had a real busy summer, so that hasn’t left him much time to hang out at home and get sessions in at his favorite places. He recently had some down time and ended up filming this wild new edit for Hoffman and Dan’s Comp at one of his home spots. Serious flatland madness. Check it out.

Dan’s Comp caught up with Matt Wilhelm to check out his current Hoffman Bikes setup. Matt gives you a run through of everything and explains some of the reasons for why he runs what he runs, and then proceeds to show you just how to ride it.

Filmed and edited by Stew Johnson

Matt Wilhelm coming through with a fresh new edit for his sponsor Pinhead that’s loaded with some flatland goodness. Always cool to see what Matt is getting into, so check it out!

Want to know how to hang five? Well, Matt Wilhelm would be the guy to learn it from. Here’s a quick video with some advice!

“Matt Wilhelm knows his stuff, as a three-time X Games medalist and two-time National Champion, you’d be crazy not to take his advice. Wilhelm recommends not using your front brakes at all for this trick, “Its a really bad habit to start off with,” says Wilhelm, “don’t be afraid to flip over the bars.” Check out exactly how Wilhelm does a hang five, and learn Step By Step how to do a hang five for yourself.” – Alli Sports

“Pro BMX flatland rider Matt Wilhelm comes clean about having two identical bikes, shares his love for music and dispels a myth about heavy bikes. Find out his biggest accomplishment in BMX and check him out riding flatland in this Alli Sports My Five.” – Alli Sports 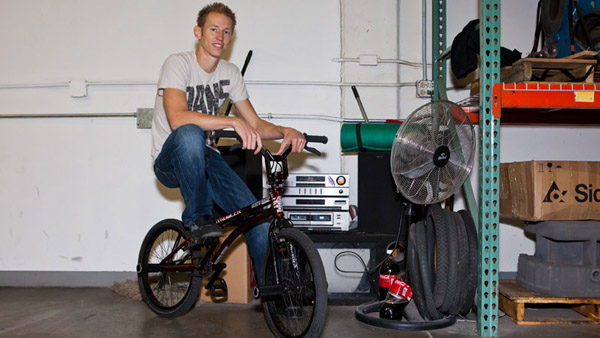 Ever wondered how Hoffman‘s Matt Wilhelm lives? Head over to the ESPN site to find out.

Dan’s Comp and Hoffman Bikes rider Matt Wilhelm has been enjoying the sun down in Sarasota, Florida for the last month. In that time, he’s been busy filming for this wild new edit. I’ll never understand how the hell he does this stuff. Check it out!