The Crispy Stream hasn’t been much of a stream as of late, but we just found out why. It looks like the crew have been going to work on a new full-length video that’ll be dropping in the next month or so called “Dulwich”! Above is the trailer that leads us to believe it’ll kick plenty of ass. Take a look!

“The third DVD production from Crispy Stream is ‘Dulwich’, a video by Mike Vockenson.
Featuring full sections from:
Cody Pollard
Denby Chandler
Dylan White
Matt
Pahau Milner
Riwai Milner
+ Friends
+ Bonus
Filmed over the last year around SEQ, this video showcases the lives of the Crispy crew, centred around the residence of a few of the crew at Dulwich Street in Brisbanes southern suburbs.
Filmed: VX2100
Cut: FCP7
Coming April/May 2016.”

END_OF_DOCUMENT_TOKEN_TO_BE_REPLACED

When Mike Vockenson has a new BMX video to check out, you almost have to prepare yourself for all of the gnarly riding you’re about to see. Today, Tempered Bikes dropped Mike’s section from the “Doomsday for the Deceiver” video online. This video starts out with a laid back song and some big clips… Then at the two minute mark the fire from down below gets cranked up and Mike really starts to send it! Mike hucks himself over some big gaps, charges some huge rails, takes some heavy drops and more. This is one BMX video you cannot pass up seeing, because it’s nuts!

“Filmed throughout 2014/2015, this is part 2 of 3 for TMPRDs ‘Doomsday For The Deceiver’ project featuring Mike Vockenson.
Shot using a Sony VX2100 and a Panasonic HVX200 within the wider South East Queensland region, Maryborough and Adelaide.
Thanks to everyone involved in creating this part.”

END_OF_DOCUMENT_TOKEN_TO_BE_REPLACED

It’s been a LONG time since we’ve seen something from Tempered, but it would appear that they’re bringing the brand back to life with fresh videos from their crew! Check out this teaser and get stoked, because it’s clear we’re in for something awesome!

“The time has come for Tempered to again take shape. Signifying the start of a new phase for the brand, this clip is a small reminder of things to come, that doomsday is almost here.
Doomsday for the deceiver is a project involving Tempereds newest recruit, Wilton Hedley as well as long-time members Mike Vockenson and Jerry Vandervalk. Each dude has a full length part, to be released every 2 weeks starting on Monday the 23 November.
It’s been a slow, long road, but as night falls and the air thickens, the streets will soon be ignited. Doomsday!”

END_OF_DOCUMENT_TOKEN_TO_BE_REPLACED

When the title includes Mike Vockenson’s name and the words”absolute madness”, you know things are going to get nuts. Check out this banger of a video for The Shadow Conspiracy that you cannot miss! I promise you will say “holy shit” at least 5 times.

“Australian Shadow rider Mike Vockenson is one of a kind. Few people would look at the set ups he does let alone think, “Yeah, I got that.” See what kind of absolute madness Mike was able to put together before going down on an over ice, breaking his shoulder, knocking himself out, and putting an end to filming!

END_OF_DOCUMENT_TOKEN_TO_BE_REPLACED

Get over to The Shadow Conspiracy website to check out a bike check with Mike Vockenson and his current Tempered setup decked out with Shadow parts! Plenty of seat post! Gotta love it!

END_OF_DOCUMENT_TOKEN_TO_BE_REPLACED

Check out Mike Vockenson absolutely tearing apart a ton of skateparks in this new one from LUX BMX! Awesome!

“Something a little different from LUXBMX’s resident madman Mike Vockenson. Mike has been riding and filming a lot lately since his epic 2020 ‘Thats Whats Up’ section and set out to make an edit comprised mainly of skatepark footage he’d collected this year. Enjoy.”

END_OF_DOCUMENT_TOKEN_TO_BE_REPLACED

A little while back The Shadow Conspiracy‘s Lahsaan Kobza made his way down to Australia to meet up with their crew down under. This video gives you a look at the street spots and parks the crew absolutely CRUSHED along the way! Hit that play button and enjoy!

“Hit the road with US Shadow pro Lahsaan Kobza as he heads to the land down under on our latest KIL Tour to meet up and ride with his Aussie and New Zealand team mates Mike Vockenson, Jono Hopping, Haimona Ngata, and the newcomer Blake Ind.

Filmed and edited by Scott Greentree

Special thanks to Triple Six Distribution, Ride On, Lux, Hell on Wheels, Backbone, and Anchor as well as Ten Cent Pistols for the track.

END_OF_DOCUMENT_TOKEN_TO_BE_REPLACED 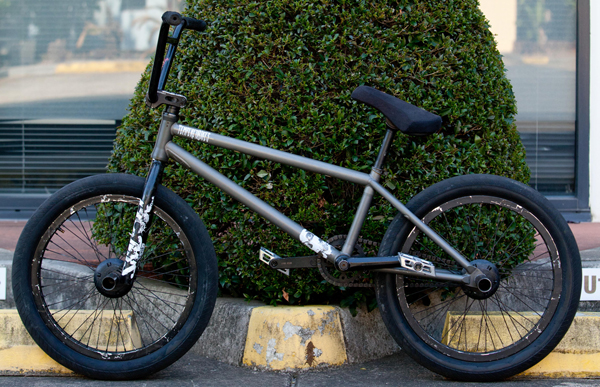 It has been a minute since we have caught up with our friend, Mike Vockenson, down in Australia! We had caught wind that he was working on a new signature frame with Tempered and had just built up a fresh bike to give it some proper testing. We figured between that, and all that time that has passed, it would be a good time to get a look at this bike and find out what’s new with the guy! Let’s take a look!