The sponsor news for the new year keeps flowing! Profile Racing have announced that they have officially added Mykel Larrin to the team! This is a perfect fit for Mykel and we’re stoked to see the news. We expect to see Mykel continuing to crush it in 2021, so get stoked!

“From everyone here at the Factory, we’re proud to announce…
Mykel Larrin; Welcome to the Profile Family!
Stoked is an understatement.
Here’s to 2021.
Photo by Andre Magarao.” – Profile Racing

We’ve seen a bunch of sponsor news the past two or so weeks, but this one was probably one of the more unexpected bits of news. As of 2021, Mykel Larrin is no longer riding for Rockstar Energy. Based on his caption, it sounds like he was let go which is real surprising considering Mykel has been on fire and it seems like 2021 was going to be another good year for him. However, Rockstar also let Ryan Nyquist go as well after 13 years with the team, so it’s most likely a budget change or restructure caused by corporate BS.
It will be interesting to see if anyone else on the Rockstar team gets let go. Right now, the team consists of Dennis Enarson, Chad Kerley, Chase Hawk, Logan Martin, TJ Ellis, Marcus Christopher, Sean Ricany, Nick Bruce, Cory Nastazio, Tom Dugan and Brandon Loupos. 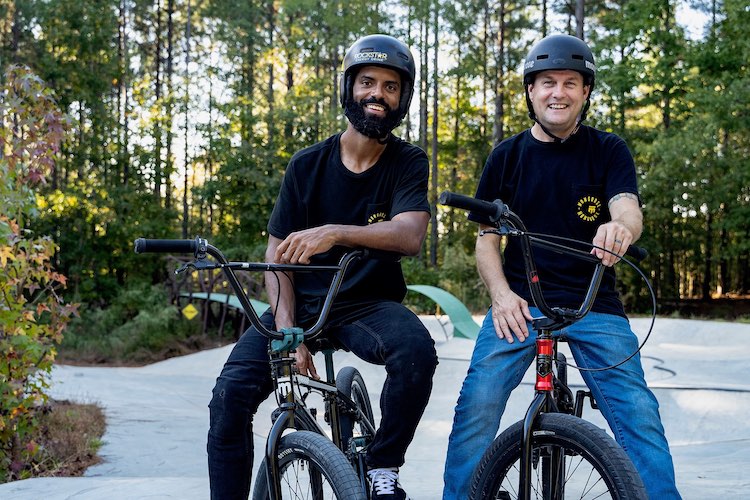 Here’s some sponsor news for you! Mongoose have decided to stack their already stacked team even more by adding Mykel Larrin to the team! This is some awesome news since Mykel has been crushing it for years and is one of the best dudes on and off the bike. Check out the official press release below with words from the team and Leigh Ramsdell about the news! Based on one of the photos, it looks like the team is already together so hopefully a new video will be coming along soon!

END_OF_DOCUMENT_TOKEN_TO_BE_REPLACED

It’s always a good day when Mykel Larrin‘s name pops up! The crew over at X Games caught up with Mykel for their latest episode of their Podcast where they talk with Mykel about a ton of things from riding the contests, his story about how he came up, what he has going on in COVID and more. As always, Mykel always delivers, so hit play and take this all in!

Last night the BMX Big Air contest went down at the X Games in Minneapolis. They had 8 of the wildest guys out on the ramp. Here’s the complete live replay giving you a look at all of the insane riding that went down from the tricks going down on the roll in to the huge jump and quarterpipe. Needless to say, this is worth checking out.

Last night the BMX vert finals went down at X Games Minneapolis last night, and as expected there were all of the heavy hitters on the deck ready to drop in and throw down. When the dust settled, Vince Byron ended up taking the top spot with Jamie Bestwick and Mykel Larrin taking 2nd and 3rd place. Check out Vince, Jamie and Mykel’s winning runs, and then check out the full live replay to see everything that went down from all the riders.

“Watch the FULL BROADCAST of the Pacifico BMX Vert event that just went down LIVE at X Games Minneapolis 2019.”

Anyone who has had the chance to cross paths with Mykel Larrin knows that he’s not only one hell of a BMX rider, but he’s also an amazing human that is kind, humble and all in all a lot of fun to be around. Mykel grew up in the Midwest and he definitely hasn’t forgotten what it took to get to where he is today. The X Games dropped this piece where Mykel tells his story from how he got into BMX, getting into contests, making the choice to ride professionally over finishing college, being homeless and more. If you weren’t already a fan of Mykel, you will be after you watch this!

“From humble beginnings in Racine, Wisconsin, BMX rider Mykel Larrin discovered the local skatepark and inadvertently met his mentor, Kuko Padilla. With a new bike, a desire to learn and an eventual dream to turn pro, Mykel Larrin became a super local at the skatepark, learning to ride transitions of all types in the process.

“The skatepark changed the trajectory of my life,” says Larrin. “And the community that existed at the skatepark kept so many kids off the street.”

With his dreams set in motion, Larrin continued to focus on school and BMX riding, traveling to local competitions and demos throughout the Midwest. Eventually, the demanding schedule caught up with Larrin and he was forced to make a choice: continue college or pursue BMX riding.

Larrin chose to put school on hold and pursued BMX riding. Following international trips to do BMX demonstrations for Armed Forces members in the Middle East, and a few choice contest placings, Mykel Larrin was invited to ride X Games. From there, the proverbial sky has been the limit for Larrin.

This is Being Mykel Larrin.

It’s not every day that we get a Vert video to check out. The crew at Our BMX dropped by the Vert Mission 2019 contest that Mat Hoffman threw in San Diego. Here’s a video filled with highlights from the riding to some insight from a handful of familiar faces discussing the current status of Vert from its popularity. It’s not as common as it used to be due to the lack of the number of vert ramps, but it’s safe to say it’s alive and well. Just watching this contest, it would be awesome to see more of these happening since it could very well re-energize this side of BMX. This contest looked awesome.

“A vert event is few and far between these days, but it just so happened that Mat Hoffman decided to throw his Vert Mission event in San Diego. An X Games qualifying event, Vert Mission, gives the top three riders their time to shine at the biggest event in the world. I went out there the day before the event during practice in hopes of filming a “favorite rider” video with DMC and Hoffman, but also had the idea to get the opinions of the dudes riding the event on the state of vert riding… So here’s their answers mixed in with the contest footage and some random banter in between. In no way do I think vert is dead.” – Our BMX