Odyssey coming through with another section from their “AT EASE” video that dropped a few weeks back. This time around we get a look at Chase Krolicki‘s section that was filmed over the course of a week during a trip to California. Despite having a pretty short timeline, it looks like Chase had no trouble stacking clips on every rail he came across!

“Chase Krolicki is our Midwestern connection hailing from the state of Michigan. Chase flew out to CA for just a week and went straight to work stacking up enough footage for this solid section in At Ease. Chase’s riding style is pretty straight forward.. difficult moves that get stomped clean. Guest appearance clips from our Brazilian connect Caique Gomes.

Odyssey BMX have uploaded Jerome Odesa‘s section from their “AT EASE” video that dropped online back in February! As many of you know by now, Jerome is a shredder and knows how to put a rail and stair set to work! Plenty of smooth lines and grinds in this BMX video. Hit play and check it out, then give the full “At Ease” video a watch here!

“Jerome Odesa brings a buttery-smooth style and laid back vibe to his section in “At Ease”. Largely filmed around his local neighborhood in Los Angeles, Jerome has a quick barspin and a way of making everything look graceful.

If you weren’t already a Jarren Barboza fan, his section in the ODYSSEY BMX – “AT EASE” video should have done the trick! The crew at Odyssey just uploaded his individual section for your viewing pleasure just in case you missed the full video or just wanted to enjoy it again! Jarren brings some buttery smooth moves with plenty of whips and bars you won’t want to miss!

“Poppy, clean, and executed with finesse. Jarren Barboza whips up some stellar footage for his section in “At Ease”.

A few weeks back Odyssey released their “At Ease” video featuring their AM squad absolutely crushing it online. They’ve decided to upload the individual sections online for a little reup for the riders that missed it or just want to enjoy it again. Up first, Hilario Olivos who brought buttery smooth moves, lines and combos to the table. Hit play and take it all in, then go re-watch the full “At Ease” video! 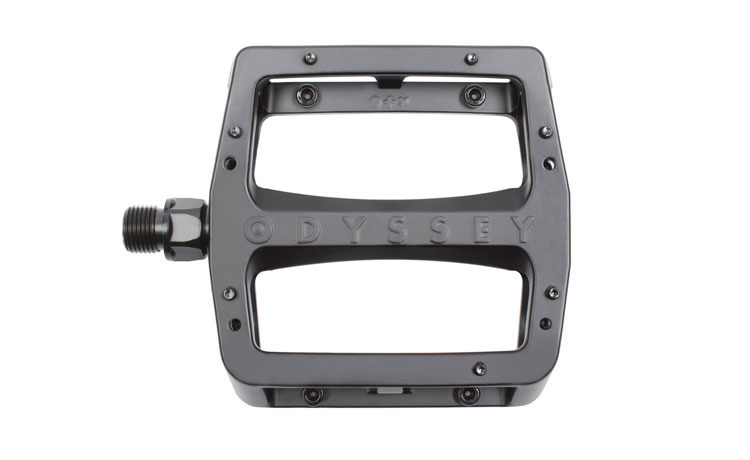 Is it time for a fresh set of BMX Pedals? The crew at Odyssey have released their Grandstand V2 pedals for you to check out. These pedals look a lot like the popular V1, but the internals have been upgraded to reduce axial movement (wobble) that can develop over time. The pedals are available in a plastic version and an alloy version keeping the slim body with a dual concave design with plenty of contact surface and 8 oversized pins per side to give you grip. Inside you can find a proprietary 14mm heat-treated chromoly spindle with 17mm wrench flats and a 6mm broach.

END_OF_DOCUMENT_TOKEN_TO_BE_REPLACED

Odyssey coming through with a short but sweet promo video featuring Matt Nordstrom putting his signature Nord Stem to work out in the streets! As always, Matt produces some real dialed riding that you won’t want to miss. This topload stem is available through BMX shops and mail-orders like Source BMX for $64.99 now! Check out more specs and details below!