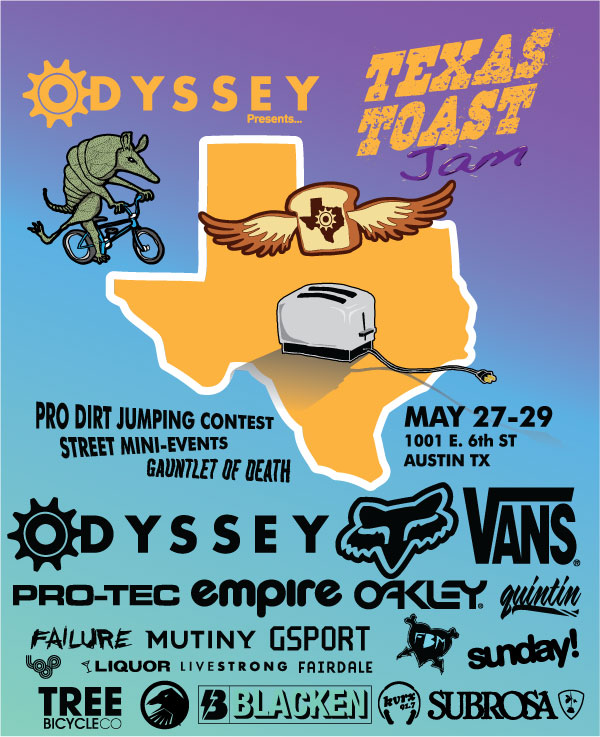 It would appear that Odyssey have added a bunch of new sponsors to the event. Here’s an update on what else to expect…

“Texas Toast Jam is coming up May 27-29.
We just added Fox, Subrosa, Shadow, Tree Bikes, Blacken and KVRX 91.7 to the event sponsor list. So glad to see BMX pulling together to make sure we all have a fun event.
Confirmed VIP guests to the event are Mat Hoffman, Mike Dominguez, and Brian Blyther. We heard Ron Wilkerson, Dave Friemuth and The Lord Voelker may make it as well!
All the best pro riders will be here to shred the dirt jumps and street obstacles. Darryl Nau of Blacken is heading up announcing duties with assistance from FBM’s Steve Crandal. Darryl is also using his considerable party skills to set up some epic after parties. Ringmaster Leland Thurman is now directing the action at the Gauntlet of DEATH. Watch riders brave its treachery and take on a 48 foot long dragon!”

Register for dirt here.
Want to help Taj with the event? He needs dirt jump and ramp builders along with event organizers. Email- texastoastjam@odysseybmx.com

All the rest of the information here. 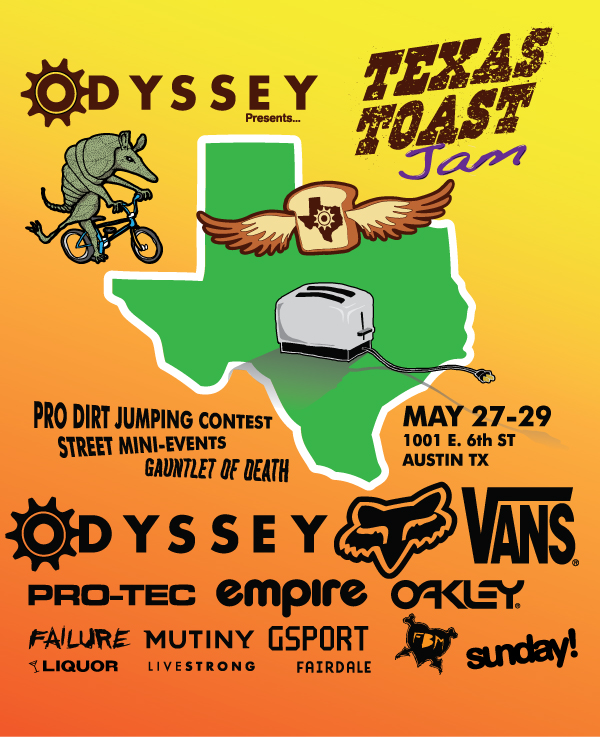 Sadly, I won’t be able to make it to Taj’s Texas Toast Jam down in Austin, Texas next month since I’ve got a shoot with some of the Etnies crew for an event up here in Minnesota. However, there have been a ton of updates that you can check out here with basically all the info on where to stay, what to eat, etc. Also, registration for Pro Dirt has been opened up. You won’t want to miss this one if you can. 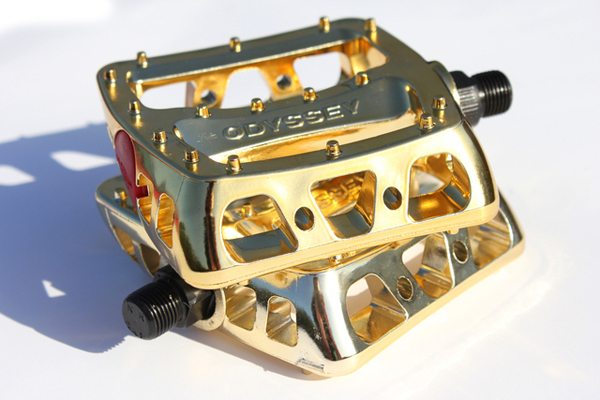 IMG Distribution just got a shipment of the new limited edition Odyssey Metallic Twisted PC pedals. They come in an assortment of colors that you can check out by hitting the IMG site. The metal look with a plastic feel. 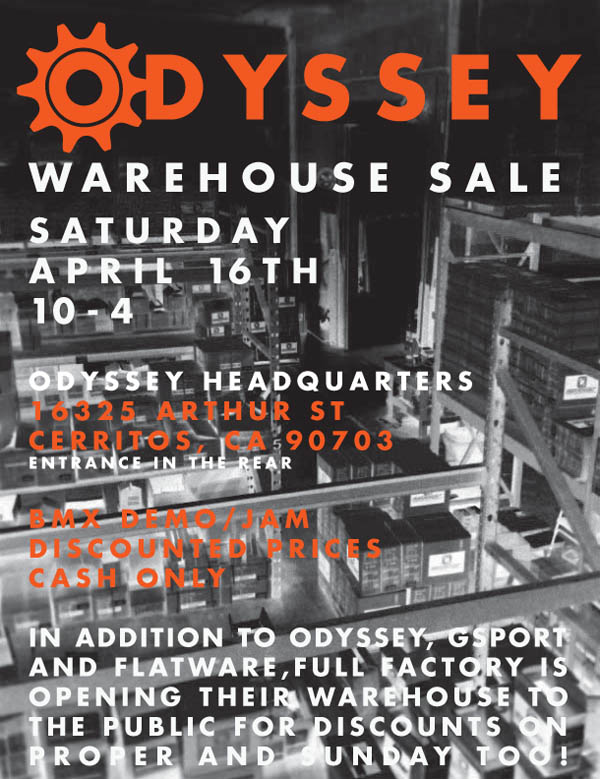 The fine people over at Odyssey, Sunday, G-Sport and Full Factory are looking to do a little spring warehouse cleaning. This saturday (April 16th) they are opening their doors in Cerritos, California to the public to get some new goods at a discount. If you are in the area, you won’t want to miss this one. I’ve toured that building and it’s super rad. Maybe they will let you check out their magazine collection if you buy a lot of stuff?

PAINTING WITH TERRY RAFFLE from ODYSSEYBMX.COM

“We are raffling off Terry’s bike and donating the proceeds to Japan. To see the full prize package for this raffle and how you can enter to win, visit: odysseybmx.com/painting-with-terry-raffle/”

“For this month’s ODSY Vision, we grabbed a handful of paint buckets and recruited Flatware‘s Terry Adams to put together a little piece of art for us. Don’t let his finesse fool you though, the technique used makes this quite possibly one of the most difficult paintings ever done. Watch and enjoy!

Today, The Hunt was announced. What the hell is The Hunt? Well, it’s a new project from the mind of Justin Kosman with the help of Odyssey, Vans and Monster to motivate some of the best filmers in the world to produce one hell of a video.

The site dropped today with an almost secretive approach to what’s going on. The Mission statement on the site is the only real clue as to what’s going on. The only thing I can think of in the past that is similar to this, is the old Aspire video contests, and even then the money and invite wasn’t there. Check out the mission statement from the site..
“The Hunt is the new arena for independent BMX productions. With nearly $10,000 in cash and prizes, it’s a project that our sponsors believe in. We also believe that all riders should have a say in who wins – that’s why after the field is narrowed down to twenty semi-finalists, the fate of the DVD will be left in the hands of the people. Not all videos should die a quick death on the internet, that’s why releasing the top ten video parts on a limited edition DVD. The contest is open to an invited number of filmers and riders from around the world. If you feel like you have a shot at this and haven’t been invited, please e-mail a link to a sample vid or the idea for your video part to hello@thehuntbmx.com. Otherwise, you’ll be hearing from us.”

The $10,000 prize break down can be found by hitting this LINK. There’s a long list of filmers that popped up as to who could have been invited, but I really couldn’t say who is for sure in or out. There’s also probably going to be 500 people submitting to get involved.

There is also an interview with Justin on Defgrip about what The Hunt is all about.

All the information that’s available about The Hunt can be found at TheHuntBMX.com with more clues coming in from their twitter @TheHuntBMX.

I’m looking forward to seeing where this goes because it can only go well. Expect more when there’s more to be found.

Odyssey put together this quick edit of Eric building up his new bike in under 30 seconds magically with their new matte Kelly green kit. When I saw this video I started thinking about the time I was out in California and we stopped by Eric’s place. I noticed he had a brand new Sunday frame sitting in his room and asked why he didn’t build it up. Eric told me about how the head tube was messed up and the bearings didn’t fit. I took a quick look and started laughing when I realized it was one of the shaved head tube samples and that the bearings were supposed to sit like that. Eric built up on the spot and it only took 35 seconds.