It’s amazing how much Carlo Hoffmann has come up in the past year. It’s clear that he has that same super power his brother, Bruno, has. It was just a matter of time before he started picking up the sponsors to help him really get out there more. It looks like Carlo is now doing it for Parano Garage out in Germany there. Check out this video of him crushing a few flat rails in a quick warehouse session!

“Bruno Hoffmann´s little brother Carlo´s riding stands for it´s own for sure. His trademark rough street tech will make for a good second episode of Parano Garage´s new Team´s introduction edits.
All of these seven edits (which will be released regulary from now on) were filmed in the Mailorder´s Warehouse in Oldenburg/Germany.
Music:
David Jack
Batwings in the window
KFM Records”

Eddie Baum puts some rails and ledges to work in the Parano Garage warehouse. Eddie puts down some grind lines that I’m not sure that I’ve ever seen before, and his usage of toboggans instead of barspins in some tricks was refreshing.

Here’s a video Freedom BMX dropped from the 15 year anniversary party that Parano Garage had. Take a little tour of the building, then check out all of the riding and good times that went down! This is awesome.

“In Spring 2013 Jann Ross Kamp celebrated its 15th year in business and invited friends and companions to a relaxed barbecue with attached BMX Jam in the La-Finca-/Parano-Garage-Hauptquartier outside an Oldenburg. While you could have it go well with all kinds of delicacies from the hall or a game of table football, which hidden Iceland mini ramp from employees and guests alike was machined inside and especially for this day even a few new Grindobstacles had been built. We took a look at the festival and not just hit a bunch of nice people and we hit the full bellies, but also held the session in moving and still images for you. Everything else you see in the video, the story about that in issue 113 freedombmx

Music: The rakede – Yes … But What If Everything Folds“ 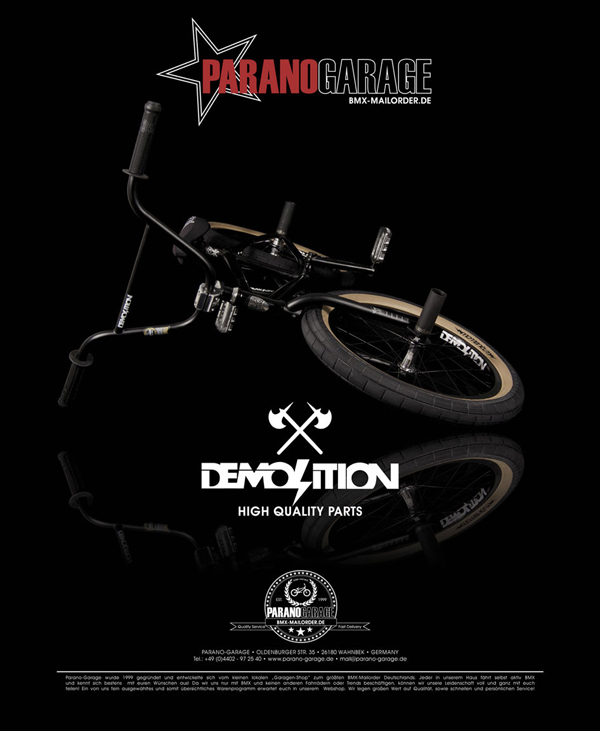 Demolition just posted up a new print ad they did with German mail-order Parano Garage. This can be found in the new issue of BMX Rider.