Jack Mould spent three days cruising around a few of his favorite skateparks over in the U.K stacking clips for this new Rad BMX Shop edit that’s loaded with some real solid riding! Jack brings a good mix of lip tricks and some big box jump moves that are well worth checking out!

Filmed and edited by Reece Healey

END_OF_DOCUMENT_TOKEN_TO_BE_REPLACED

Check out this one featuring Kai Remsbury throwing it down at a couple of parks and street spots for Rad BMX Shop and Alibico! Tons of goodness in this!

Here’s some leftover footage of Billy Purcell from last year that didn’t have a home until now! Check him out crushing some spots and his local park for Rad BMX Shop and the For The Lads crew!

The guys at Rad BMX Shop have added young gun, Jack Mould, to their line up! Hit the play button to check out some real good riding filled with dialed barspin and whip variations!

“We were introduced to 15 year old Jack just over a year ago when it was clear he had an amazing talent. We were so impressed by the style, flow and technicality of his riding and knew he was one to watch. Since then he has spent a summer at Woodward and is ready to roll with the pros.
So, welcome to the team Jack, we are stoked to have you on board.
This welcome edit was filmed in just 2.5hrs at Rom skatepark – all with the goal of the last banger. Enjoy.“

This video is awesome for a few reasons. One being the description of this video and two being that Travis Spencer is a serious shredder after just two years of riding. It’s easy to forget that riding is a crazy good work out if you do more than sit on the ledge and talk shit, haha.

“Just over 2 years ago a little fat local kid wandered into the shop for his first BMX, a couple of months later I was teaching him how to peg grind a low box…Travis had caught the BMX bug. Now, he’s lost every ounce of body fat and is totally fearless on a BMX – at just 16 he’s one to watch for the future.
Welcome to the team Travis Spencer – we are all so proud of you buddy.
Massive thank you to Freddie Dalton for filming and editing this. Top work fella!
All filmed locally at High Wycombe Skatepark, Marlow Skatepark and RADBMX Shop.” – Rad BMX Shop 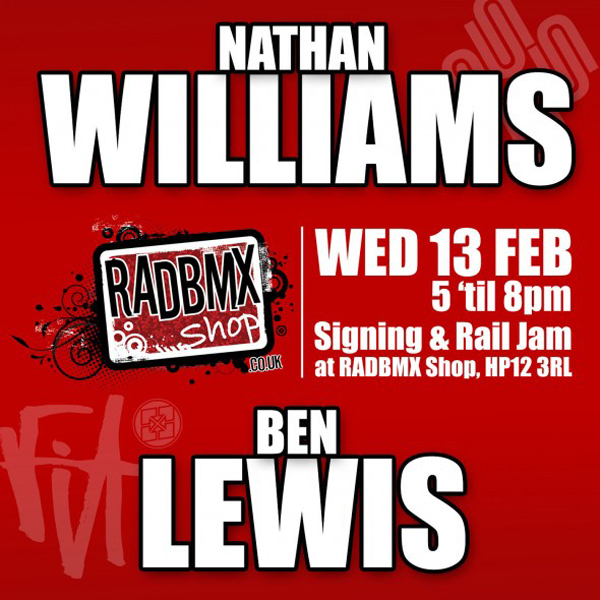 If you live near Rad BMX Shop in the U.K, make your way there on February 13th for your chance to hang out and ride with Nathan Williams and Ben Lewis! Sounds like a good time to me.

The Rad BMX Shop crew made their way over to the 4Down warehouse to get a session in. It looks like they took full advantage of the opportunity because this new edit is dialed!

Filmed and edited by Luke Duffy