Ride PA dropped this new one that Rainer Etsweiler put together for your viewing pleasure. Filmed over the course of the past two years, this 12 minute mix is loaded with non-stop gems from the streets and a little park action. If you’re looking for grinds, this video is for you. Hit play and take it all in!

“Bepiscrawdad is a video project two years in the making by a group of friends from Harrisburg and Philadelphia. The project was spearheaded by Rainer Etsweiler, with additional filming provided by most of the riders involved and Dan Conway. The video includes sections from Rainer Etsweiler, Angus Tuttle, Griffin Mann, and Mike Stahl with guest clips from Sam Downs, Noah Doss, Paul Lichtenstein, Andrew Thompson, Jesse Romano, and Grant Castelluzzo.” – Ride PA

Ride PA have released their second issue of their magazine online for everyone to enjoy!

Here’s some good news for the magazine lovers out there. The crew at Ride PA have released their second issue online for everyones viewing pleasure. This one came out in print a little while back, and now they’ve converted it to a digital form as well. This one captures a ton of goodness from last summer on through this past winter. Great photos, rad interviews and more. Get a look at this!

“In celebration of BMX Day, the digital version of ‘Ride PA BMX – Issue Two’ is now available for free through the Issuu digital publishing platform. For mobile users, we suggest you download the Issuu app which is available for both Apple and Android through their respective stores for free.” – Ride PA

Here’s a fresh video we spotted over on Ride PA for your viewing pleasure. This video features a whole bunch of riders getting down on street spots around Pennsylvania, Maryland and Washington DC. This mix has a pretty laid back vibe to it, but there’s a ton of real solid riding mixed throughout that makes it well worth the watch. Take a look!

Sections from the Ride PA DVD “Quaker State” are starting to pop up online. Check out the first section that’s filled with just shy of 11 minutes of real solid riding from The Yea crew.

“DIG is proud to present the first section of ‘Quaker State’ a Pennsylvania based video series produced by Ride PA BMX, bringing together crews and riders from across the state. The Yea crew hold down introductory part honors, and kicks things off in a great way.

Look for the next section to drop next Friday!

More info on the project here on DIG –

Filmed and edited by Matt Smith”

END_OF_DOCUMENT_TOKEN_TO_BE_REPLACED

Pennsylvania is home to a few of the finest BMX riders and BMX crews in out and it looks like they’re coming together to make a new DVD under the Ride PA site to make one badass video. Above is the trailer for “Quaker State” which will feature a lot of familiar faces all putting in work on street spots in their area. Based off what we’re seeing above, this should be a BMX video that will NOT disappoint.

END_OF_DOCUMENT_TOKEN_TO_BE_REPLACED 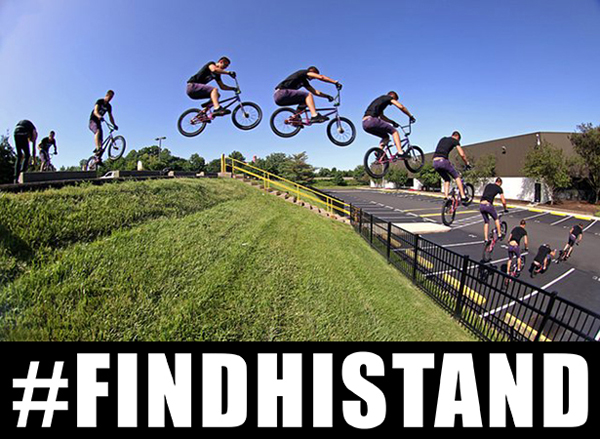 The search for Brian Histand hasn’t stopped, and it won’t stop until they find him! The guys at Ride PA just made some stickers to help raise awareness and also funds to help keep the search going! Get on this right now!

“#FINDHISTAND stickers are now available through a Big Cartel account we have setup to accept donations. The stickers and shipping are free with a donation which will help aid in the search for Brian Histand who was last seen in Phoenix, Arizona on May 15th, 2013.

There are three options to select from which include a $3.00 donation for which you will receive one sticker, a $5.00 donation for which you will receive two stickers, and a bulk option which is for shops and anyone else who would like a larger order of stickers at the rate of $1.50 per sticker. If you are interested in a small bulk order (10-20) we are only taking orders by email at support@ridepabmx.com or through the contact page provided in the Big Cartel store.“