Not many guys could get away with riding to classical music in extreme slow motion, but Kris Fox isn’t most riders. After an epic intro, Kris explains his signature complete and then goes full speed crazy for the second half of a video. 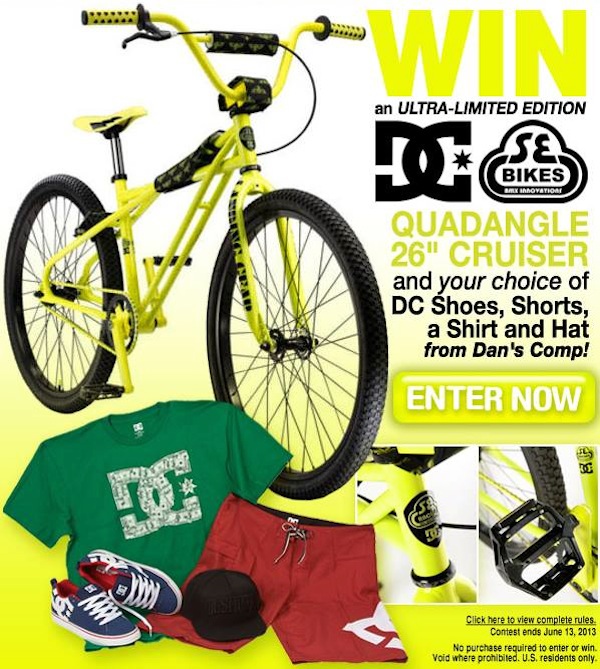 Dan’s Comp is giving away a crazy bright 26 inch SE cruiser and a bunch of DC goods. Just hit this link, fill out the form and keep your figures crossed!

SE‘s Fernando Sabat, Kris Fox, Big Daddy, Josh Clemens and Jake Leiva put in some team work for their video they submitted for the Woodward West Shootout. If you like what you are seeing go vote for them here.

Over the last few months the Colony, Demolition, Haro, SE Bikes, DK, and Redline teams have made their way to Woodward West to film for this contest they have going on called the BMX Shoot out. You can check out each teams video and then vote by Clicking Here. Get to it!

It’s been a little while since we’ve seen some fresh Josh Clemens footage, but it looks like he’s been getting his riding time in. Check out his latest edit!

“SE Bike’s Oregon based shredder Josh Clemens took advantage of the early unveiling of fall before the harsh weather rolled in. In this edit he lays down some extremely solid riding around a ton of local Oregon spots.
Film / Edit: Donald Lucero / Spencer Jackson / Josh Clemens
Song: The Four Tops – This Old Heart Of Mine” – SE Bikes

If you like style, this edit is for you. So good!

“Larry Edgar, Fernando Sabat and Kris Fox worked their way around Orange county and the Riverside area to shoot photos with Matt Lingo for some upcoming projects. Check out the clips of what went down.” – SE Bikes

Josh Clemens is now doing it for SE Bikes. Check out this awesome welcome edit loaded with street goodness. You won’t be disappointed.

Film / Edit: Donald Lucero / Josh Clemens
Song: Portugal The Man-Lay Me Back Down