Mike “Hucker” Clark talks a little bit about the history of Sheep Hills and throws down on some of the jumps!

There’s no place like home! Mike “Hucker” Clark talks a little bit about the legendary Sheep Hills that he has been riding since he was 12 years old, along with some footage from a lap through one of the lines! Take a peek!

After you watch this, check out the video of Hucker riding at the Oakley Trails!

“Did you get enough of Hucker yesterday? If not, we have this little breakdown of what it’s like to ride the place that made Mike the rider he is, Sheep Hills. A little bit of history and a quick cruise through this legendary set of trails…” – Ride BMX

Here’s a short but sweet promo video S1 Helmets dropped featuring Dylan Stark catching some riding time at Sheep Hills in California. This video is more of a look at a run through the place, but Dylan manages to go upside down a few times, stretch his arms out and get sideways. Take a peek!

Here’s a little more footage from the Mike “Boozer” Brown benefit jam that went down at Sheep Hills this past weekend. Take a look at this video Dylan Pfohl sent through, then make sure you go make a donation to Mike right here. It’s going to help a BMX rider in need, that’s for sure!

Spotted this over on Can You Dig It. Robbie Miranda strapped a GoPro on for the Boozer Jam that went down at Sheephills this past weekend. Take a little ride with him to see how well the legendary spot is running these days along with the HUGE turnout to help benefit Mike “Boozer” Brown! 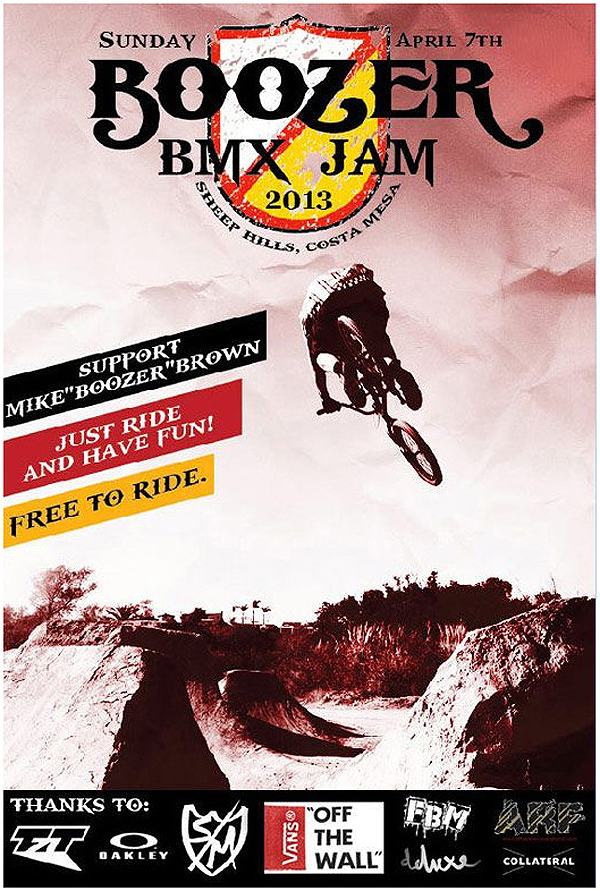 Live near Sheep Hills in Costa Mesa, California? Make your way there on April 7th for a jam to help raise money for Mike “Boozer” Brown! This is bound to be a damn good time and it’s for a great cause, so be there!

“Last fall one of the Sheep Hills Locals by the name of Mike “Boozer” Brown crashed in a BMX race in Reno and broke his back which has landed him in a wheelchair. Mike has spent more time at Sheep Hills than most of us digging, riding and something that has to do with his nickname.

You can come down too. Riding and spectating is free. Down for a good time?