The Simple Session guys have teamed up with Quintin Co. guys to do some limited run hats for this years contest that’s coming up here in March. Take a closer look and pick one up by Clicking Here.

Simple Session 13 is coming up fast! They’re going all out over in Estonia by running this commercial on TV to get people hyped. How crazy is that?

Who’s getting stoked for this years Simple Session? Here’s a quick teaser they dropped of the drawing of what the course should look like. This should be AMAZING. 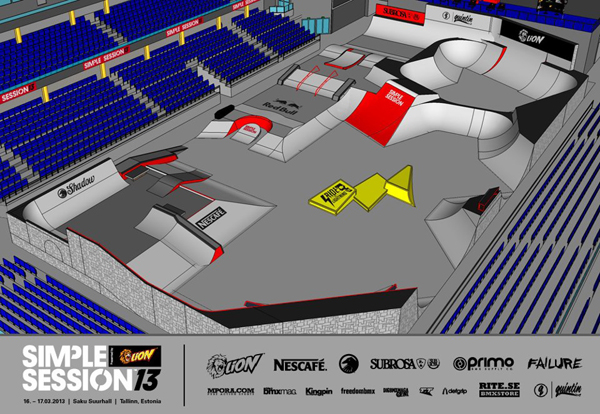 Want to see what this years Simple Session course will look like? Head over to their Facebook page to check out the drawings. If this year goes like all the past years, it’ll be the wildest Simple Session yet. Can’t wait to see it go down.

Every year the Simple Session gets bigger, better and wilder than the year before. With that being said, if you are anywhere in the world March 16th and 17th, I’d advise you are in Tallin, Estonia.

“We followed teamrider Wilem Van Gansen to Simple Session 12 to show what it’s all about: fun, riding, and party!
Filming and editing by Bart Cautaerts
Music:
The Asteroids Galaxy Tour – The Golden Age (Prince Vince Remix)
The Concept – Gimme Twice
Kasabian – Fire
Thanks to Quintin, Radio Bikes, Almond and Eclat.”

“Check out our BMX highlights from yet another amazing Simple Session. The Vans team seemed perfectly suited to the park and street courses with each rider playing to their strengths and finding some great lines that took full advantage of the Simple Session set up. With everyone pushing hard it was inevitable that there were going to be some slams and unfortunately Lacey, Young and Harrington all crashed out. Whilst he might of missed out on a podium position Bruno Hoffmann’s ability to consistently come through with his clean, strong style whilst pulling out bangers will no doubt stick with people for a long time.” – Vans