The Street Series 2015: Glasgow a BMX video by freedombmx

The Street Series videos from BMX Day keep pouring in! The guys over at Freedom BMX just hit us with a link to their video from the Glasgow stop! With guys like Alex Donnachie, Dan Paley, Nathan Williams, Fernando Laczko, Sebastion Anton and many, many more out on the streets, you know things got wild! Hit that play button to check out what went down in the BMX video above!

“Like two years ago, guested The Street Series also 2015. in Glasgow. This time the whole thing was part of the first edition of #bmxday, took place at the same time more stops of Grind sports spectacle in San Francisco, Chicago, Riga and Nagoya. We have Fernando Laczko and Sebastian Anton accompanied to Scotland, where about 250 riders a day, the streets of Glasgow made uncertain. Here are the highlights of an excellent Streetjams. Music: This, That & The Third – Control Instrumental (courtesy of staff Records)”

END_OF_DOCUMENT_TOKEN_TO_BE_REPLACED

Yesterday we got to hear Dakota Roche Mic’d Up at The Street Series: San Francisco, now today we get to hear what Dan Lacey had to say up in Chicago! Hit that play button to see a ton of the riding that went down along with plenty of commentary from Dan all throughout!

Want to see more? Check out our video and photogallery from The Street Series: Chicago!

“Lacey is one straight-forward, funny mother fucker. So, when I strapped to a mic to him at the beginning of the Chicago stop of The Street Series, I knew this would end up being a long edit. From dealing with security, whispering sweet nothings in my ear, and talking a bit of shit, Lacey pretty much had commentary for everything. Besides a couple of missed clips at the last spot (I had to go get something to drink), I think this video does a pretty proper job of showing all the good times that were had in Chicago. Thanks to Monster for organizing this, Kachinsky for doing the ground work, Lacey for being a part of this, and all the locals for coming out and making #bmxday a huge success.

We’re starting to see more footage from the Monster Street Series stops that went down all around the world on July 18th! Here’s a video Andrew Arthur put together from the Glasgow stop that gives us a look into some of the riding that went down throughout the day on different spots they had hit up! The video is a little rough around the edges, but it gives us a good idea of the success of this BMX day event. We’re sure there will be a bunch more footage coming from this one since Glasgow is where DIG’s headquarters are located.

END_OF_DOCUMENT_TOKEN_TO_BE_REPLACED 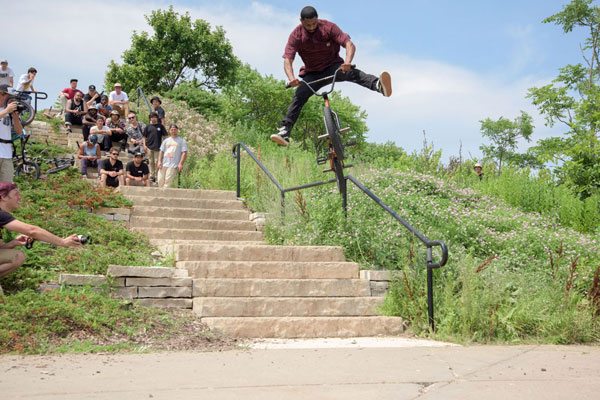 This past weekend, The Street Series invaded cities in Japan, Latvia, Scotland and the United States with crews of riders getting together and swarming the streets for massive sessions to celebrate BMX Day! Chicago was one of the 5 locations that was selected for the day, and some of the Midwest’s finest got together with Brian Kachinsky and Dan Lacey as they lead the crew from Grant Park Plaza to a handful of the city’s finest street spots. We had photographer Dennis Peralta out cruising with his camera and he came through with a dialed photogallery featuring the likes of Dylan McCauley, Dan Kruk, Trent McDaniel and many, many more! Hit the link below to check out all of the photos! 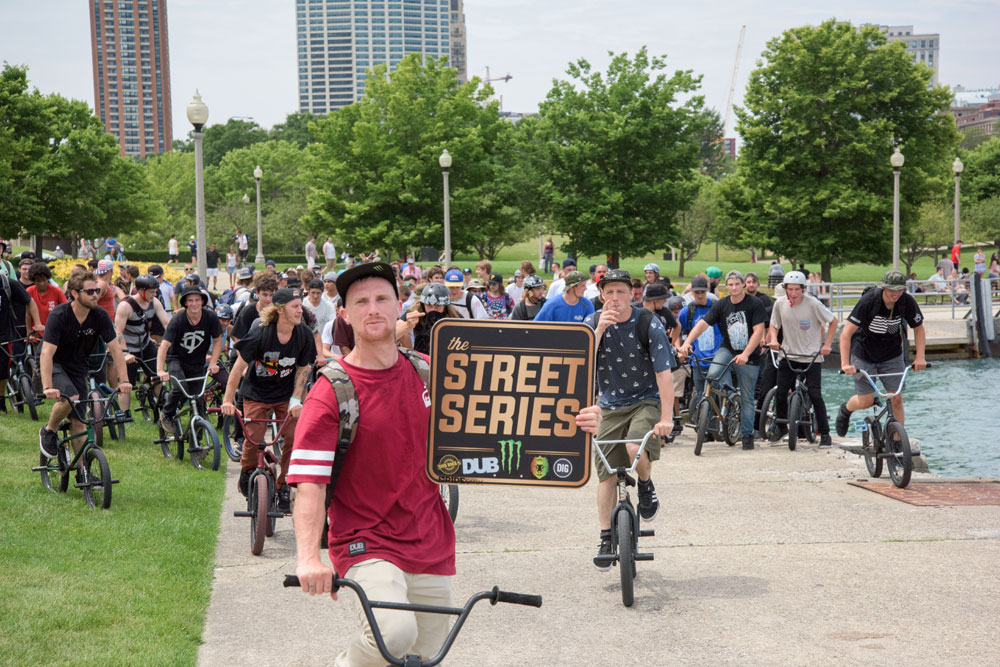 All photos by Dennis Peralta

Ride BMX hooked a Mic up to Dakota Roche for the entire day at the Monster Street Series stop in San Francisco! Hit play to see some of the riding that went down and to hear what Dakota was saying and thinking out loud throughout the day! There was a MASSIVE turnout for this stop of the Street Series with a few hundred riders trying to get in on the action.

Want to see what went down at the Chicago stop? Monster Street Series 2015 – Chicago Highlights

END_OF_DOCUMENT_TOKEN_TO_BE_REPLACED 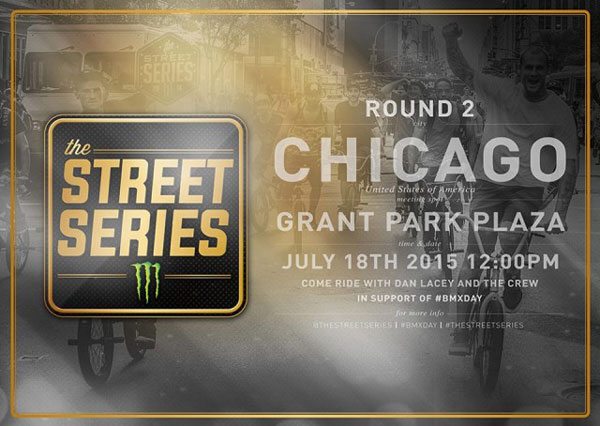 The second stop of The Street Series for 2015 has been announced! On July 18th, they will be invading Grant Park Plaza then hitting the streets to find out just what Chicago has to offer. They will have Dan Lacey on hand so you know things are going to get wild! If you’re in the area, this is one event you cannot miss.