Want to see how Tom Dugan won the Big Air contest at the Van Doren Invitational last weekend after taking one hell of a slam from 20 feet up? Check out this highlights video from Ride BMX. What we want to know is where the hell Larry Edgar went for this contest? He was blasting higher than anyone all weekend long, but didn’t ride the highest air contest. So weird.

END_OF_DOCUMENT_TOKEN_TO_BE_REPLACED

Did you catch the live feed of the Van Doren Invitational yesterday? Well, if you missed it, you’re in luck because this video gives you all the highlights from BMX finals where 20 of the best went to work on the course! Everyone threw down some big bangers and we definitely became huge fans of Larry Edgar after seeing him blasting the entire course. This is one BMX video you’ll want to check out!

“Highlights from finals at the Vans US Open Van Doren Invitational… From boost, to style, to tech, it’s all here. Congrats to Dennis Enarson, Gary Young, and Daniel Sandoval who took 1st, 2nd, and 3rd, respectively.” – Ride BMX

END_OF_DOCUMENT_TOKEN_TO_BE_REPLACED

Want to see how Dennis Enarson won the 2015 Van Doren Invitational? Well, here’s a few highlights from his runs during the finals that earned him that top spot! Definitely a ton of crazy riding, as expected, from Dennis that was a well deserving win. That manual to fast plant 180 into the bowl is so wild.

“Dennis Enarson takes the top spot at the 2015 Van Doren Invitational, beating out Gary Young and Daniel Sandoval who got 2nd and 3rd respectively. Here are some highlights from the 3 runs he put together that ultimately scored him first place.” – Ride BMX

END_OF_DOCUMENT_TOKEN_TO_BE_REPLACED

The Van Doren Invitational just wrapped up and it was one hell of a BMX contest! Every one of the guys who made it into the top 20 were sending it and the live feed (or live if you were there) was awesome to watch! They just announced the final results and it looks like Dennis Enarson has taken home the win with Gary Young and Daniel Sandoval rounding out the top 3! Full results below.

Check out more from the Van Doren Invitational! 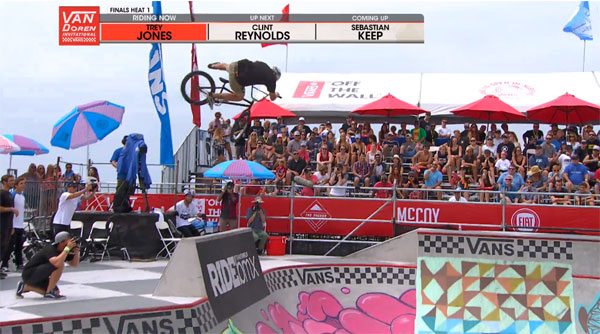 The FINALS for the 2015 Van Doren Invitational just kicked off! Go watch the LIVE FEED over on the VANS US OPEN website! Listen to Mike Escamilla and Dennis McCoy bicker at each other and watch some amazing riding! This is one BMX contest you gotta watch, because it’s going to get wild!

This is one of those videos that will suck you right on in! Not a lot of people get to experience the super serious, high intensity moments of the deck, but Ryan Fudger at Ride BMX pulled out the camera to show you just how things go down at the Van Doren Invitational. This is clearly a no fun zone. Take a look!

“Unpredictably to me at the time, the Bullshittin’ At X Games video I made was rather enjoyable. So much so, that I had several request for a follow up at the Dew Tour. It didn’t happen. Blame the one-man-show. But, for the Van Doren Invitational, I had Zach and Justin holding down the videos, so I wandered around and pointed the camera in basically everyone’s face. And, how I described the X Games video still subscribes to the $35,000 purse available at the Van Doren Invitational: “But, all the money and all the pressure aside, there’s still this portion of it that is really just jokes. Bullshit, really. All the random shit talk, the playing around, all the stuff that makes BMX fun for a lot of these dudes that are the best of the world still exists in a lot of ways, and I hope this video shows that it’s still mostly laughs…””

END_OF_DOCUMENT_TOKEN_TO_BE_REPLACED

Yesterday was the first official day of the Van Doren Invitational and some of the best BMX riders took to the course to throw down to try and secure a spot into the finals! Check out this video from qualifying featuring Dennis Enarson, Dean Cueson, Alex Hiam, Daniel Sandoval, Kevin Peraza, Larry Edgar, Kris Fox, Tom Dugan, Maxime Charveron and many more all putting in work! Looks like it was non-stop bangers all day long!

“Day three at the Van Doren Invitational came with more comfort from the riders… Higher airs, lines already figured out, and more tricks added into said lines. 3 heats of 10 riders battled it out to qualify for finals, and 15 made it.” – Ride BMX

END_OF_DOCUMENT_TOKEN_TO_BE_REPLACED

When you have a course like the bowl for the Van Doren Invitational packed with riders like Dennis Enarson, Daniel Sandoval, Chase Hawk, Gary Young, Matt Roe, Kris Fox, Kevin Peraza, Dean Cueson, Greg Illingworth, Scotty Cranmer, Clint Reynolds, Pat Casey, Trey Jones and more, amazing things are going to go down! Check out highlights from day two of practice in the video above. If this is what we’re seeing in practice… Just imagine how insane the actual contest will be?!

“Day two of the Van Doren Invitational quickly proceeded to get even crazier than the first, the riders were more than familiar with the ramp and ready to hit the boost button! You can’t watch this contest and not be hyped, Clint Reynolds could be roasting out of the bowls deep end one moment and the next Daniel Sandoval might be laying down a flair crazy variation. The variety in riding styles is going to make for one hell of a qualifying round tomorrow!” – Ride BMX