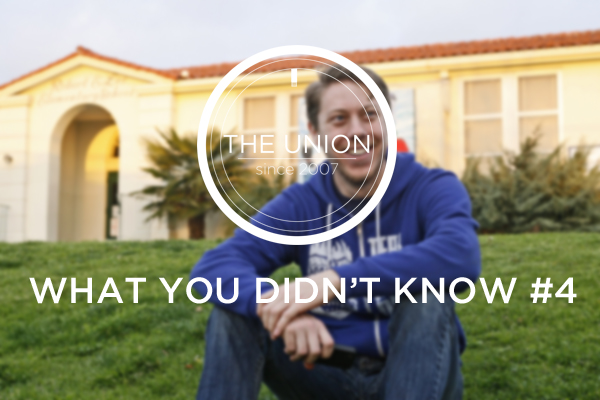 There has always been something intriguing to me about getting some behind the scenes details on a photo. I don’t know what it is about it but I just get stoked on seeing exactly how someone shot a specific photo and get a little insight into the process. I suppose it has something to do with the fact that every photographer shoots a little differently, which in turn makes each story unique in its own way. I can remember studying photos in magazines and borderline obsessing about the way that they were shot and honestly over the years not much has changed. I still find myself getting lost in photos to this day with the same level of curiosity that I had when I first started shooting. With that said, enjoy round four of WYDK.

Earlier this year I ended up shooting with a few of the Madera guys like Tom Villarreal, Sean Morr and Mike Hinkens. Now although Tom and Sean live in Cali and I see them around, Mike is a staple in the Mid-West BMX scene and has been for quite some time now. With me being from New York I had the opportunity to meet Mike on the East Coast some time ago so when I heard that he was going to be in town I definitely wanted to make an effort to shoot with him and see what we come up with. Normally this is how I operate which is with a loose plan so not much was different there. It’s one of those things where you don’t really want to ever put pressure on a shoot, especially when it comes to BMX. Just like how I talk all of the time about letting my column happen “organically” I like to treat meeting up and shooting with riders the same way. If I go out and spend a day shooting and don’t get anything “print worthy” then it is what it is, but I would never be mad about that because it’s all part of being a photographer. 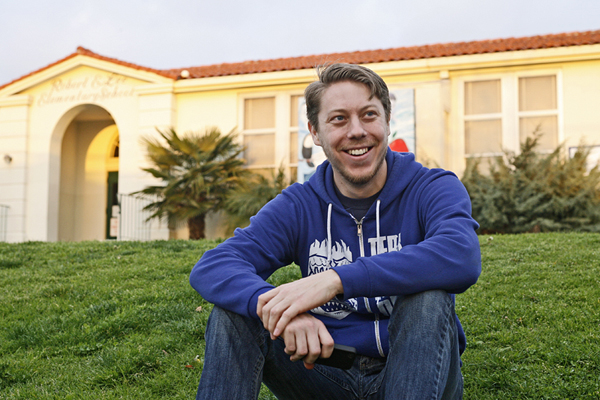 When we got to the spot which happened to be a school in Long Beach Mike was pumped on the variety of shit there was to ride and didn’t hesitate to call out the thread-the-needle up and over set up. Now, if you know Mike at all you know that he is a pretty tech rider and this suited his style perfectly. He asked me if I would be down to shoot it so I immediately started weighing out my options and thinking about how I could make the wall ride look as good as possible. I actually set this shot up with flashes first but there ended up being crazy shadows everywhere so right away I knew that I had to get rid of them and use what light was available to me. It was an overcast day and the lighting was actually pretty flat which in most cases might seem like a bad thing but for us it ended up working out perfectly. 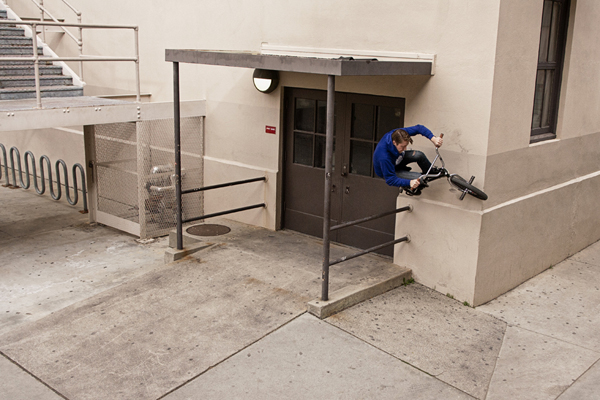 Typically I try not to, but in this case I had to bump the ISO up to 400 to shoot fast enough to really freeze the action without any strobes. Once I searched around and found an angle I was happy with that really did the trick justice I set the shot up on a tripod. Timing wise, I really wanted to make sure to show the fact that the section of the wall that Mike is riding on is not even a bikes-length long which in my opinion is what makes the whole photo. My original intent for this shot was a three-frame sequence. I wanted to have Mike in the run up, on the wall and riding away. He ended up doing it twice and the second time was as good as it gets. Once I reviewed the photos and showed Mike we decided that it was a wrap and we were both pumped. Not only was it rad to know that we got the photo but it was also awesome to get the chance to shoot with an old friend so getting a useable photo was a bonus for sure. 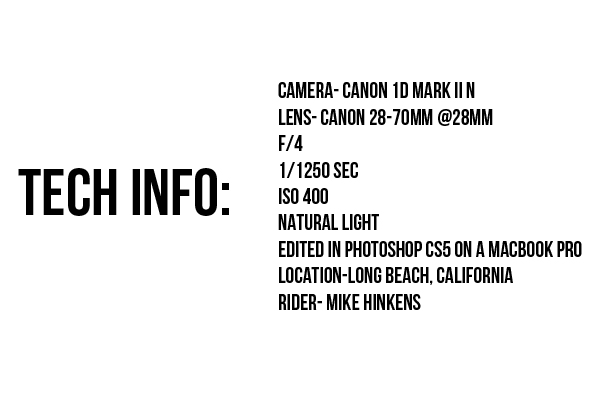 When it came time to edit the photo I ended up putting the sequence together and looking at it that way but for whatever reason I was really feeling the single image of the actual wall ride by itself more than the three-frame sequence option. I think the thing about this photo that stands out to me is the fact that Mike’s hoody really makes it pop. With the entire background and foreground being similar in tone the crisp blue in the sweatshirt really sets it off. Once I had the edit completely dialed in the way that I wanted to my next plan was to try and get it in print. I hit up George Marshall from The Albion and let fate decide the rest. Luckily for me, George and the crew over there were pumped on the photo enough to run it as a double page spread in the newest issue which happens to be #11. I swear I will never not be excited when I get the approval on running a photo in print, especially in a magazine as well respected by the entire industry as The Albion. Those guys really have their shit together and this happens to be my second full spread in there so I was once again honored to have that opportunity. Not only that but the fact that the photo is of someone I consider a good friend that I have known for years is a huge bonus. Mike had no idea this photo was coming out so you can imagine how stoked he was to find out. One of his friends on Facebook actually took a cell phone photo of it and tagged him in it and Mike ended up hitting me up saying how surprised he was. That right there is one of the many reasons that I do what I do and the feeling of knowing a photo that I was personally really into found a home within the pages of The Albion is an amazing feeling.

On that note, I want to shout-out to George Marshall and the rest of The Albion crew. Be sure to check out The Albion issue #11 to get a look at the photo in print and see it full-size. I actually haven’t even seen it in person yet and I can’t wait. Also, feel free to support a magazine that is doing it right on so many levels.

That’s it for the fourth edition of WYDK. Always keep in mind that there is no right or wrong way to shoot a riding photo and I hope that each and every one of you that has an interest in becoming a BMX photographer fully understands that and explores every option when it comes time to shoot. Make sure to double check angles, look for unique locations to stand, get low, get high, climb on fences, climb on roofs, and do whatever it takes to get the shot. One thing I can say is that it sucks to get a photo back home only to check it and feel “shooters remorse.” Basically that happens when you see a photo and wish that you shot it with a different lens, at a different angle or with a different lighting set up. Also, always remember that being critical of your work is absolutely essential if you want to survive in the photo world so don’t be afraid to delete some photos and don’t be afraid to re-shoot. As long as you are progressing and learning from your mistakes, you are on the right track. On that note, be sure to check back next Wednesday for the thirty-fourth edition of Through the Lens and as always feel free to leave any questions in the comments section or email me at info@jeremypavia.com and I will hit you back as soon as I can. Feel free to follow me on Twitter and Instagram @jeremypavia.

Check out past editions of Through The Lens below!