Looking for some BMX Bike Games to play? 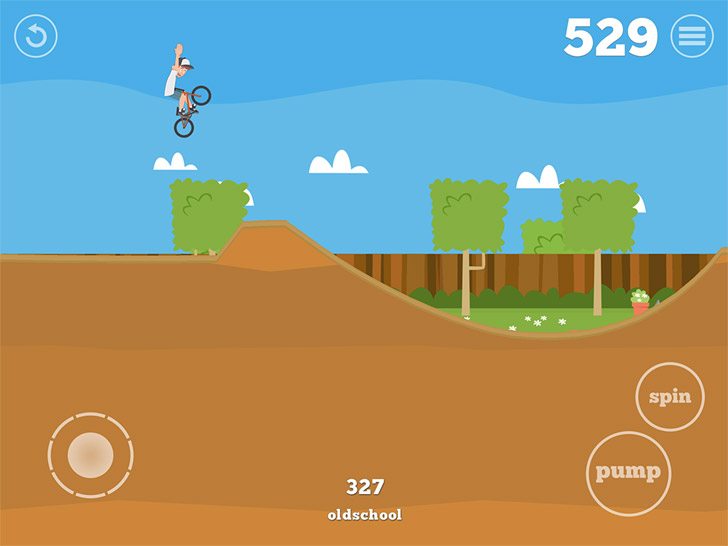 Over the years, there have been a number of different BMX Bike Games that have popped up for console and iOS and Android devices. We have been sharing those BMX Bike Games on our website and decided it might be a good idea to compile a list of the different BMX Games that are available for you to play on your phone or console! So, if you’re looking to play some BMX Bike Games, check this out! Also, if we missed any, please
let us know in the comments below so we can get it added to the list!

King of Dirt is a BMX game that is designed for phones. It’s currently on available in iOS and is free with In-App purchases. The game allows you to chose your style of bike from BMX to moutain bikes and mini BMX’s to scooters.

“King of Dirt lets you experience the most immersive first-person bmx action without actually stepping on a real bike. Pull some of the most epic bangers in this adrenaline-fueled arcade extreme sports game. Design the dopest wheels to your liking, get down and dirty on the wild and thrilling dirt trails. Nail tricks like a pro and become the gnarliest legend on the leaderboards. Addition to BMX bikes and Freestyle MTB, you can unlocks Scooters and super sexy Mini-bikes!

Features:
– Ride 6 legendary BIKE and a SCOOTER!
– Pull massive air in 5 epic DIRT TRAILS.
– Design your very own personal BMX or MTB bike!
– Bring your skills to the online MULTIPLAYER!
– Experience adrenaline-fueled CHALLENGES.
– Special BONUSES for the best bmx rebels.
– COMPETE against your friends in the game of B.I.K.E. (Next Update!)” 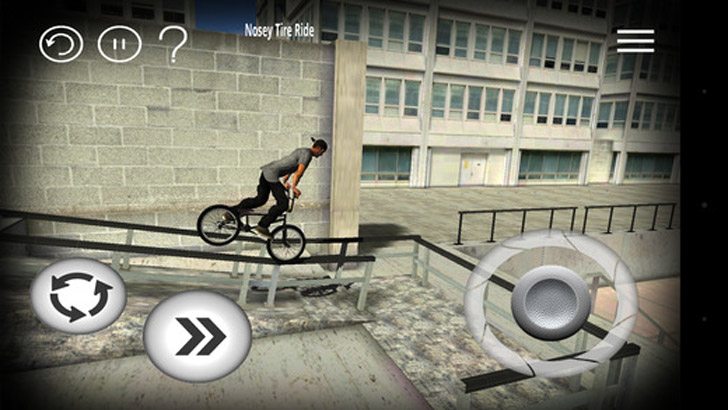 “BMX Streets is not for the faint hearted!
Progress your BMX skills with over 250 challenges in 19 unique street spots. Shred the rails, time your hops, grind the ledges. Learn the lines to meet the challenges and master BMX Streets!

Be the the first to master BMX Streets!”

Touch Grind BMX is one of the first BMX Bike Games to hit phones. The game, similar to King of Dirt and BMX Streets is a first person game that allows you to customize bikes and throw down on all sorts of different setups from trails to ramps and street. This one is currently priced at $4.99.

“Become a BMX pro and perform spectacular tricks in breathtaking locations all over the world. Your skill and imagination are the only limits to the tricks you can pull off! Impress your friends by uploading your best runs to YouTube and Facebook.

We took everything that made Touchgrind into an App Store classic to the extreme and created Touchgrind BMX. At Illusion Labs we only release games that we are extremely proud of. We feel that BMX is the pinnacle of our productions to date!

Stunning 3D graphics, amazing physics and realistic sound. Collect medals and complete challenges to unlock many different bikes and locations. Watch replays, generate videos, export to your computer or upload to YouTube and show all your friends on Facebook, by just a few clicks. 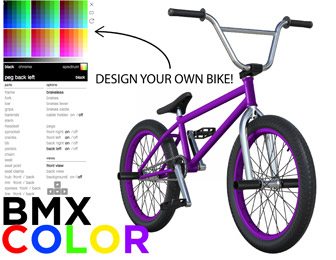 Have you tried the BMX Color App out yet?

The BMX Freestyle Extreme 3D Game is another game designed for the phone. This one is also FREE. It uses a slightly different perspective from the others above. The quality and tricks aren’t quite as dialed in as some of the other games, but it’s free, right?

“Awesome freestyle BMX game in 3D.
Whether you like skating street, or big ramps and half pipes, this game has it all, completely free!

Do manuals, slides, flip tricks, grabs, and all the other tricks you can imagine, and line them together for insane combos like the pros!

Ride one of the 6 awesome premade skateparks, or create your own custom park, with more than 40 different ramps, rails and funboxes, to choose from!

Customize your characters clothes and BMX!

Earn skill points to level up your characters skills, like jump height, spin speed and more!

The game is developed by independent developer EnJen Games. Follow EnJen Games on www.facebook.com/EnJenGames, to request new features, report bugs, or get the latest news about new EnJen Games or updates!”

The Stickman BMX game is not designed to be the most realistic, but it’s definitely fun. This one features a Stickman named Stickson, who you can put to work on a BMX bike.

“Stickman BMX Free – The long awaited sequel to the smash hit game ‘Stickman Skater’ is finally here! Our hero Stickson returns in the latest installment to test his skills on a street BMX bike. Do you have what it takes to survive the wide variety of terrain including forests, cities, oil refineries and the ultimate test that is living hell!

Simple to pick-up-and-play with plenty of depth to keep the avid gamer entertained for hours.

If you actually ride BMX, there’s no way you haven’t heard of Pumped BMX. The original is super addicting and will get you excited to catch a session on your bike. Available for $1.99 for your phones.

“9/10: Superb” – AppGamer.net
“The thing is addicting as hell!” – Props BMX
“This game is legit.” – Yeaa boooooii
“Those turndowns are way too clicked! Buy this game!” – austinbikeley

Made by a BMXer for everyone who loves a challenge, Pumped: BMX is a true-to-life, insanely addictive and challenging BMX game created by someone who actually rides! If you’re not a BMXer the tutorials will guide you, but prepare yourself for a brutal lesson in trails style!

From huge jumps to technical lines, from insane stunts to stylish flow, Pumped lets you ride the way you want to ride. 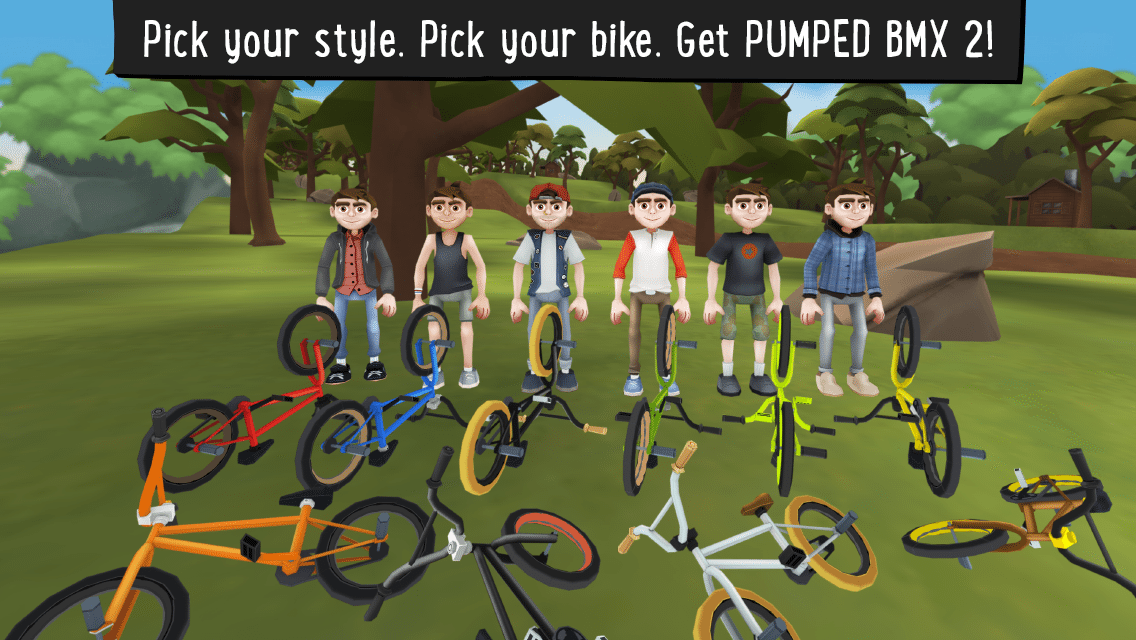 The 2nd version of the Pumped BMX series! This one is $3.99 in the store and it’s definitely one of the most addicting BMX Bike Games. This is a trails based game and has the realistic challenge because it requires you to pump and not just hit a bunch of buttons to throw the tricks.

“The no.1 rated BMX game is back with more insane stunt action!

Following the 2012 cult hit, Pumped BMX is back and packed full of more wild levels, more wild tricks, and over 500 challenges and achievements. Oh, and it’s 3D too!

ABOUT THE GAME
Ride your way through increasingly challenging levels while pulling off crazy trick combinations. 16 authentic BMX tricks can be combined with flips, spins, grinds and manuals for almost unlimited creativity. Includes a totally redesigned tutorial system so in just a few minutes anyone can be shredding like a pro.

CHALLENGES & ACHIEVEMENTS
Throw down your best moves to beat all 500 challenges or kick back and chill! It’s up to you. Game Center leaderboards and achievements, featuring the best BMXers in the world, mean that you’ll be sessioning Pumped BMX 2 long after the main game is complete.

VIDEO RECORDING
If that’s not enough, you can now record your runs straight to your device for sharing online (#pumpedbmx2), or even make your own web edits (not supported on iPhone 4).

FEATURES
– 50 levels, 500 challenges – from the simple to the fiendishly difficult.
– Game Center leaderboards and achievements, featuring top BMX pros.
– 16 legit tricks from kickouts to cliffhangers, from icepicks to nose manuals.
– Super accurate physics – as close as you’ll get to real BMX without picking up a bike.
– Amazing controls allow full creativity, from floaty 360s to frontflip bikeflips.
– Record straight to your device for full control over your videos.” 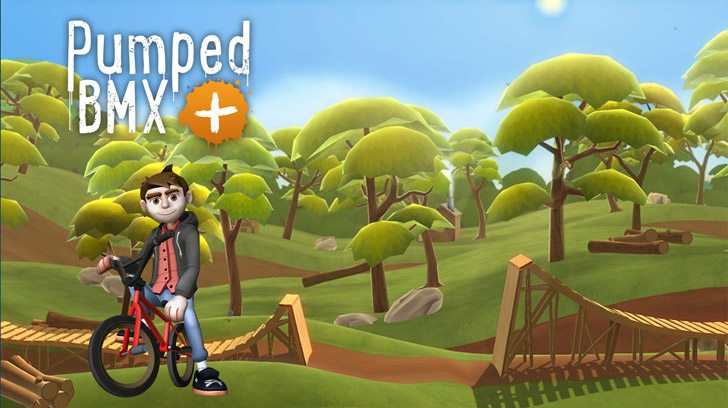 The 3rd Pumped BMX game teamed up with Curve Digital to take the game to consoles! This game can be downloaded on Wii U, XBox One, Playstation Vita, Playstation 3 and Playstation 4 by visiting the store on the console and searching for “Pumped BMX +”. Warning, this game is as addicting as the first two for your phone!

“Pumped BMX + uses the hit game ‘Pumped BMX 2’ as inspiration – taking everything which made the mobile version so successful and enhancing every aspect of it for console.

Originally developed by one man studio Yeah Us!, Pumped BMX + sees players ride their way through increasingly challenging levels while pulling off crazy and impressive trick combinations. The game lets players choose their rider style and throw down their best stunts whilst racing through more than 500 challenges to reach the top of the leader boards.

BMX The Game is a console game that has been in development for quite a while now. Unfortunately a game like this is expensive to produce so they’re still building it out. Even though it’s still in development, it’s available for pre-order now and you can test the beta version until the official release!

That’s a look at some of the current BMX Bike Games that are currently available for phones and consoles. There’s a number of games we didn’t mention like the Dave Mirra and Mat Hoffman series of games that were and are available for Console.

Did we miss any BMX Bike Games? Let us know in the comments below so we can get them added in!