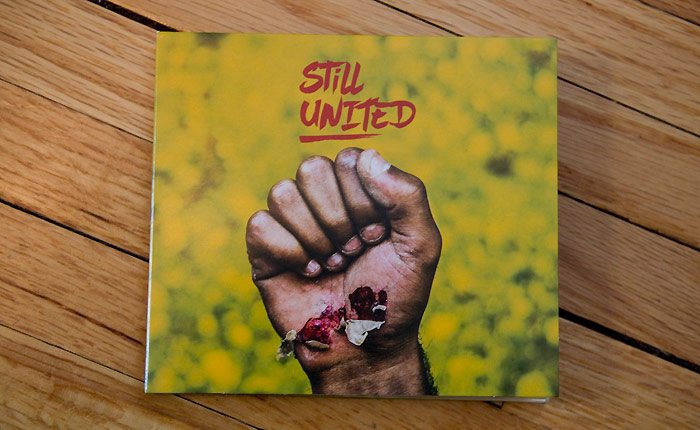 By now, there’s a good chance that you have seen United Bike Co.‘s new, long awaited, highly anticipated “Still United” DVD that was a two year long project that was finally released the other week. This project, with Peter Adam taking care of the filming and editing, features Jeff Kocsis, Christian Rigal, Geoff Slattery, Corey Martinez, Alex Valentino, Nathan Williams, along with some of their flow and AM squad from around the world. We got our hands on a copy the other day and have given the video a watch a few times over now, so we figured it would be a good time to give some of you sleeping on the video a little insight into just what “Still United” has to offer! Ready? Let’s do this.

Alright, so, going into this video there was a good amount of hype around the video. Rumors of what was in the works had been floating around since word that the United team had been working on full-length early on and that definitely lead to that anticipation I mentioned at the start. When you team up a crew like United has with a filmer like Peter Adam, you can guarantee that whatever comes from it is going to be real good.

When it comes to videos like “Still United” that are getting a lot of hype, I try to avoid reading or checking into anything but trailers just to keep the surprise alive and not to get my expectations set to some sort of un-obtainable level. Obviously with how connected the world is these days with social media and everything, that can be pretty tricky, but do able. So, when the time came to drop the DVD into the player, I was still in for a good surprise.

“Still United” features full sections from Jeff Kocsis, Christian Rigal, Geoff Slattery, Corey Martinez, Alex Valentino and Nathan Williams, then two mix sections featuring Sebasian Anton, Fernadno Laczko, Tom Deville, Nico Terrez, Dan Boiski, Harry Mills-Wakley, Jimmy Rushmore, Jack Birtles and United Bike Co. owner and legend Ian Morris. With a line up like that, you can tell right off the bat that this video is going to be 100% street and that everything in their path was bound to get destroyed.

Going through the video, it was pretty easy to see that these guys all had a mission of pushing their limits and going after some clips that would leave most of us broken into pieces. When you look at the cover of the case for the video, you see a torn up hand and that’s just the start of it. Most of these guys ended up with plenty of cuts and bruises to last most of us a life time and there was at least one T.K.O. These guys all kicked their asses hard for this video.

Some of the highlights for us were the crazy curved rails that Christian Rigal makes look way too easy, Jeff Kocsis’ ability to ride any setup in front of him, Geoff Slattery going full on at everything with plenty of style, Corey Martinez making it clear that he might be getting “older” (in comparison to the 12 year olds putting out videos) but he’s still progressing and not slowing down one bit, Alex Valentino’s buttery smooth lines and the clear indicator that Nathan Williams put every ounce of himself into filming for this project, dropping some serious mind blowing hammers that he made look way too easy. It was also so good to see Ian Morris getting a good number of clips for the mix section. It’s been quite some time since we’ve seen some riding footage from Ian and it’s safe to say he’s not slacking despite being damn busy with running United and 4Down. 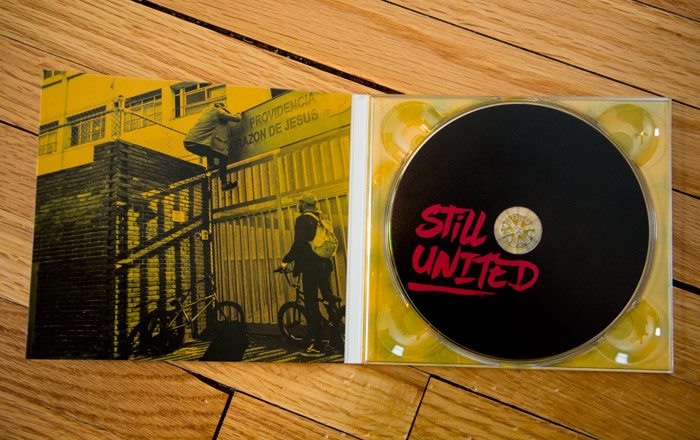 Both mix sections didn’t disappoint, either. Each guy brought their own unique style to the table. We were real stoked to see how much footage Jack Birtles was able to collect and we’re pretty sure he would have had no issue getting a full part had he had the opportunity to travel more for the project.

For the most part, it seems like these guys had a good amount of time to film on some of their more local home spots. Corey and Nathan had a good number of clips in Nashville, Jeff had a bunch of clips from New Jersey and the East in general, and with Christian constantly filming on the never ending spots that Southern California had to offer, he had no shortage of clips around his home turf. It did look like Alex Valentino spent a lot of time traveling for this one, with a handful of banger clips from what appeared to be New Mexico and a few other places outside of France in his section. Not to say these guys didn’t travel for this one. There was footage from the U.S, U.K. Spain and a few other places throughout this one.

The majority of filming and all of the editing was handled by Peter Adam. Peter has been producing videos for a long time now, so when we heard he was going to be in charge of this video, we already knew right off the bat that the video was going to look as good as the riding. Peter did a great job of stacking clips in a good mix of long and fisheye angles keeping things interesting. I personally lose a lot of interest when a video is filmed the majority in one way or another — especially in fisheye. I think that’s what burns me out on VX, because of how much of it is filmed with a Death Lens. But, this video is far from that. Plenty of unique shots kept this video flowing well. The editing was definitely on point as well. This video showed the highs and lows these guys went through putting in work, along with plenty of extras mixed in from some of the characters they ran into while out filming. One thing I noticed throughout this video is how many random people passing by had their phones out filming. I don’t know why that stood out to me so much, but it’s a pretty interesting time where everyone can be a filmer or photographer. I’d be willing to bet there are a number of clips that leaked on Instagram and Facebook that nobody will ever see from some random who happened to stumble across these guys, haha.

I really liked the filming and editing for “Still United”. The video flowed smooth from section to section and everything was pretty clean and uniform when it came to transitions. They had James Cox handling the motion graphics and Will Smyth taking care of the graphic design aspect of things. So that’s two more people who you can always count on to do a good job, as well.

The music was definitely a perk, too. It’s always cool when a video has a diverse sound track that, despite being pretty different music still went together well. You can find music from The Jim Carroll Band, Black Sabbbath, Frank Zappa, Boston, Eric Clapton, Three 6 Mafia, Janis Joplin, Nirvana, The Melvins and a number of other bands… Looking at that list, you can tell this has more of a classic rock vibe and dependent on your taste in music might be a perk or a downside for you. For me personally, I was real stoked on the direction that Peter and the crew went in for this one. 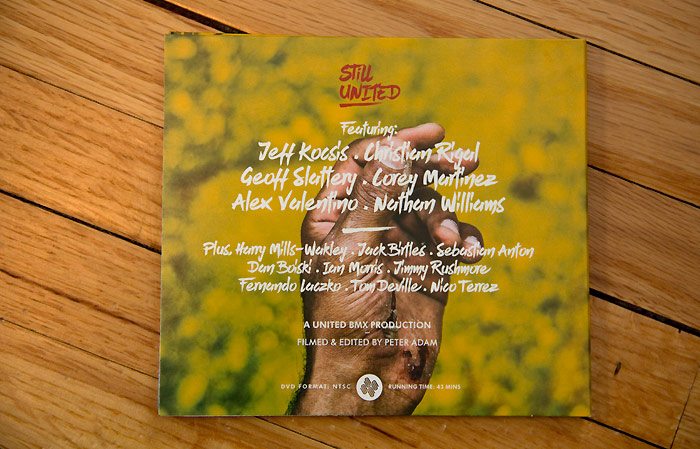 So, let’s wrap this up. Overall, “Still United” definitely lived up to the hype. Everything from the insane riding the the film work, editing, graphics and music were on point. I can’t really think of any negatives that stand out to me on this one. The video runs for 43 minutes with no bonus section, so maybe that’s downer if you like bonus sections?

Do I think this is a BMX video worth buying? Oh, hell yeah! Definitely worth the money and it’s one of those videos you will want to keep in the collection. Obviously this is one for the street guys and doesn’t feature any park or trails footage, so if that’s your thing and you aren’t into street, this one probably isn’t one for you. The video is available now in DVD format through all BMX shops and mail-orders that carry United Bike Co. for about $14.99. If you prefer digital, then you will have to wait a little bit, but I know they’re planning to release it on iTunes (or another similar online store) here soon, which will be less expensive if you’re pinching pennies. Big shout out to United for putting in the effort to produce one hell of a DVD. I know it gets harder and harder to justify putting so much time and money into a video, but this one was definitely worth the investment.