If you checked the site yesterday, there’s a good chance you caught the news about the console release of Pumped BMX coming up on September 18th for X-Box, Playstation, Wii and PC! We figured with the release coming up quick, it would be a good time to catch up with the game developer, Adam Hunt, on Skype to talk about getting the game ready for consoles, working with Curve Digital, the start of Pumped BMX 3 and the potential for future games and more. We also were lucky enough to get Dan Lacey to sit down and talk about how he got involved with Pumped BMX as well. Hit play and enjoy!

Pumped BMX is currently available on iPhone and Android and will be released on X-Box, Playstation, Wii and PC starting September 18th! Check out the full trailer below! 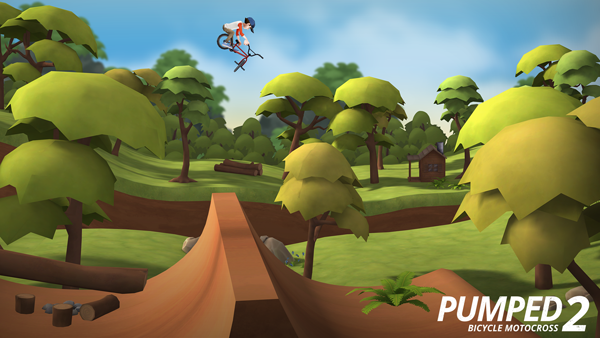 Adam Hunt, the creator of Pumped BMX, which is a pretty popular game around the BMX community, hit us up with some news that he will be releasing Pumped BMX 2 this summer! Check out a few words from Adam about the new version and a handful of screen shots below. If you want a better look at the screen shots, CLICK HERE!

““Pumped BMX 2” adds loads of improvements to the original: first of all the game is now 3D, allowing the player to combine spins and tricks (e.g. truckdrivers, 360 tailwhips). Along with that I’ve doubled the number of tricks the player can do, with some pretty wild additions. Needless to say 360 bikeflip frontflips are a ridiculous (if not slightly horrifying) trick… And if that’s not enough I’ve also added grinds and manuals! Don’t expect to be doing over-crooks, but icepicks, toothpicks and 50-50s are all locked in.

In total we’re talking 16 air tricks to be combined with flips and spins and linked together with grinds and manuals. I tried (and failed) to do the maths, but the number of potential combos is definitely way up in the millions!

Ride a relaxed line and do nothing but floaty 360’s, xups and kickouts, or go big and throw down double frontflips, 720 turndowns or an icepick to decade – the game is there to let you ride how you want.

That’s “Pumped BMX 2” and it’s coming this Summer 2014 for iPhone and iPad, with Android not far behind.”

More photos after the jump!
END_OF_DOCUMENT_TOKEN_TO_BE_REPLACED