The Great Lakes State Crew out in Michigan coming through with their first full-length video under their new name (formerly 989 Crew, “Great Lakes State of Mind” that is just shy of 30 minutes of pure goodness.

“For this film I set out capture how beautiful our Great State is. While touching lightly on our decaying auto industry cities and our states hard drug problem. Every clip in this video was filmed in Michigan. The GLS crew brings a “run what ya brung” attitude. We see almost 200 days of precipitation. Compared to the Cali scene which is under 50 days of annul precip.. Rain or snow you’ll find us out enjoying what we love! Whether its bmx,mtb, skiing, or snowboarding we embrace our Michigan lifestyle and live it to the fullest extent. From Detroit to Houghton. L.P. to the U.P. Grab a cold one, que the video up on a flat screen and enjoy this video half as much as we did creating it!”

GLS would like introduce new crew rider Jesse Vasquez. Jesse is one of the most down to earth people we know and he is obviously a natural killer on his bike. The decision was made effortlessly and were excited to work more with him in the coming years.

Visuals – Transcend by Audionautix (http://audionautix.com) is part of the YouTube Audio Library (https://www.youtube.com/audiolibrary/…) and it’s licensed under a Creative Commons license (https://creativecommons.org/licenses/…)

Alex McTaggart, Grant Ueberroth, Jordan Capece, and more from the 989 Crew are back at it again with another mix of footage. This time around they spend some time at the Grayling skatepark stacking a few clips. This is pretty laid back, but there’s some solid clips worth taking a peek at. Check it!

The 989 Crew are back at it with another mix for you. This time around Trent Lutzke, Jonathon Dietz, Alex McTaggart, Jordan Capece, Grant Ueberroth and more all spend some time throwing down at the Midland cement skatepark over in Michigan! Hit play and take it in!

Filmed and edited by Alex McTaggart

Here’s a rad way to start your Thursday off right! The Daily Grind and 989 Crew out of Michigan teamed up for a dialed new mix edit featuring Mike Vitatoe, Zack Gerber, Troy Merkle, Tony Cherry, Felix Maisonet, Martin Belisle, Kreg Delano, Alex McTaggart, Jonathon Dietz, Gage Keller, Trent Lutzke, Grant Ueberroth, Dan Conway, Jon “Gremlin” Bechtold and Scott Steele all putting in work on the streets. This is a super good watch from start to finish with some dialed riding, rad spots and just an overall good vibe. Don’t forget these guys are throwing a street jam in Cincinnati, with the help of a few brands, on August 27th! Flyer below!

“Daily Grind and 989 Crew have been meeting up a lot lately, so why not a mix edit!
Filmed by everyone
Edited by Alex Mctaggart
Song: “Never Falling Down” by Living Legends” 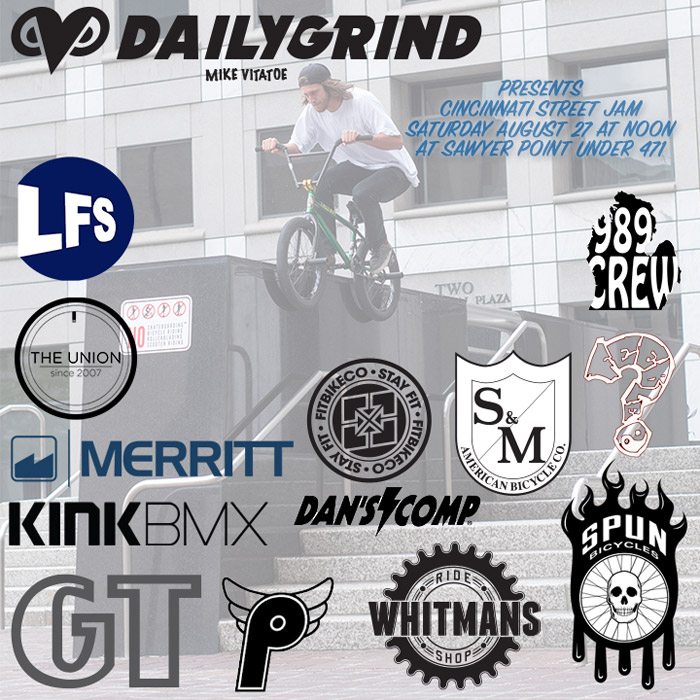 END_OF_DOCUMENT_TOKEN_TO_BE_REPLACED

The 989 Crew have been pumping out a bunch of BMX videos lately. It looks like they recently decided to load up and head south to cruise the spots in Louisville, Kentucky. This starts out with some footage from the skatepark that we honestly do not see enough footage out of followed up by some street action. It looks like these guys had a damn good time during their time riding the park, dodging a squad of ruckuses, getting “yelled” at by probably one of the coolest security guards ever, cruising street spots and more. Hit play to take it all in!

“The Crew headed to Louisville, KY with good friend Mike Vitatoe. The weekend had good vibes throughout as we cruised the park and the city. Enjoy!

The 989 Crew have been on it with the BMX videos from the Sacinaw skatepark lately. Here’ the third one they put together from some of the time they spent at the Sagnasty park. Hit play to check out some clips from Alex McTaggart, Trent Lutzke, Jonathan Dietz, Layne Hunter and a few others who all came through with some solid clips for this round.

The 989 Crew coming through with a new mix from the skatepark in Flint, Michigan for your viewing pleasure. This edit features Alex McTaggart, Trent Lutzke, Grant Ueberroth, Jonathan Dietz and Nick Seabasty all putting in some time on the rails and ledges the place has to offer. This has a pretty laid back vibe, but there’s some solid riding to take in. Check it!
END_OF_DOCUMENT_TOKEN_TO_BE_REPLACED

The 989 Crew over in Michigan invaded Howell to cruise their local skatepark for the day. Although the place has a pretty weird design, it looks like all of the guys had no trouble stacking some clips for this video. Hit play and take in all the grinds and more that went down!

Filmed and edited by Alex McTaggart