Anthony Napolitan sits down for an interview on the Unclicked Podcast!

The latest round of the Unclicked Podcast has arrived. This time around Anthony Napolitan sits down for a nearly 3 hour conversation talking BMX, MTB’s, contests, sponsors and so much more. Anthony always has something interesting to talk about and plenty of stories. Hit play and give this a listen!

“Life long bike rider, World Champion, Contest Creator, X-Games Medalist, and guy who walked away from one of the luckiest front flip bails ever is on the podcast today. Give it up for Anthony Napolitan! Anthony has done it all. He’s gone through lots of chapters on his journey in the bicycle industry. Anthony breaks them down for us and spreads his love for all things bikes on todays episode of Unclicked. Hit play and enjoy!

Snakebite keeping the videos from the “System Video” flowing! Back when Flybikes were distributed by System Cycle they had a big U.S team that was actually really stacked at the time! Tyrone Williams, Anthony Napolitan, Tony Neyer, Brandon Pundai, Javier Ortega, Matt Wilhelm and more! This section is quite a bit different than the style the Flybikes team is known for these days, but this definitely has a ton of great riding in it! Take a look! 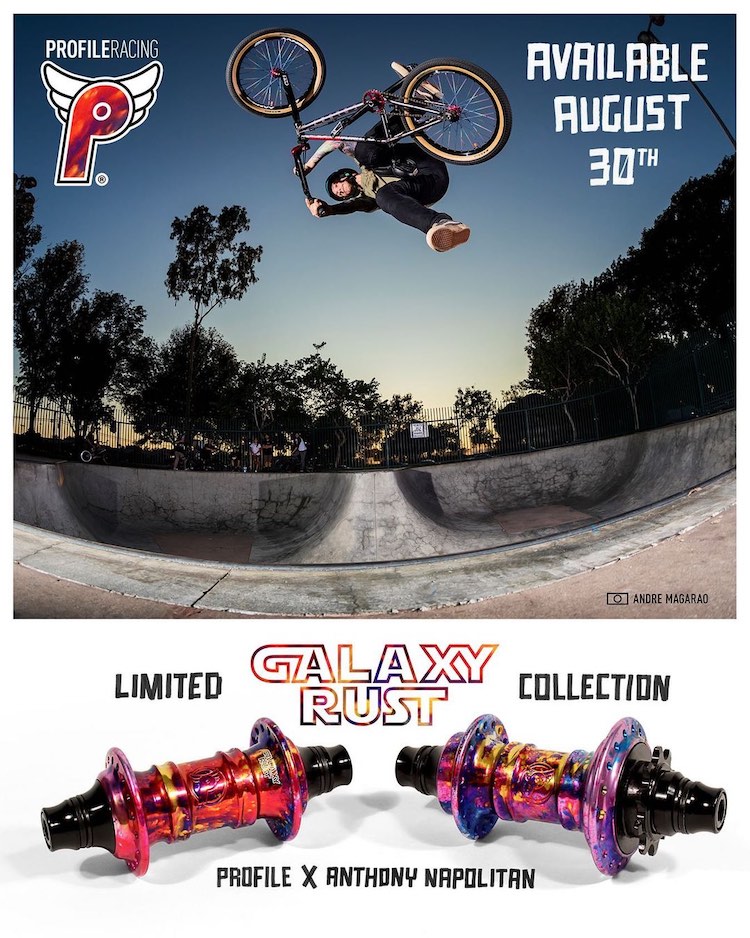 It’s been a little while since we’ve seen a wild colorway that really caught our eye. Profile Racing released a sneak preview of their new Anthony Napolitan signature Galaxy Rust Colorway that’s due out August 30th! It looks like it will be available on the Mini hubs, but usually these limited edition colors come with matching stems and sprockets, so we’ll see what else comes on August 30th!

You can always count on a rad video when The Wetlands pop up! Here’s a video from a productive session with Anthony Napolitan, Mike “Hucker” Clark, Larry Egar, Pat Casey, Tucker Smith, Mason Ritter and more. The trails were primed in, and plenty of dialed clips were filmed. Hit play and take it all in! You won’t be disappointed.

“Happened to be near the Wetlands on a Wednesday, so that meant that they typical heavy crew would be roasting the trails just as they have over the last several years. Thanks to Anthony Napolitan for letting us come out.

Filmed by Ryan Fudger
Edited by Dalton Voss
Music by http://soundcloud.com/figureofwax” – Our BMX

The second day of the Super BMX Estilo Livre Practice Sessions has arrived, and it looks like they peeled back the tarps on the big lines where the contest is going to be held, and things just keep getting wilder and wilder down in Brazil. The Caracas Trails never cease to amaze no matter how many videos we’ve seen from the place. Check out what Mike “Hucker” Clark, Pat Casey, TJ Ellis, Anthony Napolitan, Alex Landros, Leandro Moreira and all the locals were throwing down on these MASSIVE dirt jumps.

“Day two at the Super BMX Estilo Livre event in Sao Paulo, Brazil. The rain is lingering, but the big line was half running so the dudes were sending. This event is about to be epic.” – Our BMX

There’s a wild new bike park that opened up near San Diego called the Sweetwater Bike Park. This place looks like a TON of fun and it looks like Mike “Hucker” Clark, Gary Young, Anthony Napolitan, TJ Ellis and a ton of other people took advantage of the place during its grand opening. This is a lot of raw footage, but it gives you an idea of what the place has to offer. It’s safe to say there’s another reason to make your way out west to San Diego!

“Random story: I actually drove by this place a few times in the last few months and it was super confusing to me. It looked like a BMX track, but it was obviously not finished and I couldn’t really get a good look at it. Little did I know that it was an in-progress bike park that was free and open to the public. I headed out the grand opening for a little pre-session with the dudes and here’s the raw cut along with a GoPro preview of the park thanks to Anthony Napoiltan and Justin Mclintock. If you’re in the San Diego area, check out the Sweetwater Bike Park at 6065 San Miguel Rd, Bonita, CA. It’s open from 9:30am to sunset. Fair warning, they don’t allow pegs because of the nature of the way the place is made. ” – Our BMX

Here’s some other info on the place on the SDparks.org website.

What do you think of the Sweetwater Bike Park? Would you take a trip out to San Diego to ride the place? Anyone have any places similar to this in their area? Let us now what you’re thinking in the comments down below!

.. We just need a Gorge Road style bike park here in the U.S… Now that would be wild!

Where are my Midschool riders at!? Chris Doyle uploaded this gem from the early 2000’s for you to enjoy! The “Piece By Piece” video was produced by Jay Loychik and features a handful of familiar faces like Chris Doyle, Anthony Napolitan, Steve Cuesta and more getting down on some legendary midwest parks, trails, street spots and more. This kicks a ton of ass and definitely shows what this era of riding was all about! No shortage of Brakes, Primo Hemorrhoid seats, technical ramp riding (so many fufanu combos) and more in this BMX video. Hit play!

“Piece by piece is a short underground video that highlights a group of RIPPERS from the Youngstown, OH area. Filmed & edited by Jay Loychik.” – Chris Doyle

Now this is what a good time looks like! Anthony Napolitan threw a jam at the California Training Facility where he brought in a bunch of pros and a few young guys for a full day of riding and good times. Here’s a video giving you a look at all the action that went down!

“Anthony Napolitan brought us together to film his first Bowl Dog Jam. The concept is simple: invite some people out to ride, give ’em some free food courtesy of Wienerschnitzel, have some laughs, and then give some products out courtesy of Anthony’s sponsors Profile, Colony, and Maxxis. Oh, and we filmed some clips, too. ” – Our BMX