*Click on images in gallery to see full resolution.

The finals from Red Bull‘s Dreamline went down this past Saturday. The format was once again very loose with everyone who didn’t make it into finals voting for the top 3 riders. With a line up of Brian Foster, Chris Doyle, Mike “Hucker” Clark, Luke Parslow, Dennis Enarson, Cory Nastazio, Gary Young and TJ Ellis in the finals, good things were obviously going to happen.
After the lines were touched up and watered by the building crew, the guys started rolling in on the trails. Once everyone was good and warmed up, the guys in the finals were given the heads up that the clock was going to start and they had an hour to impress everyone with everything in their bag of tricks.
Needless to say, the final jam turned into a full on session with almost everyone riding; not just the guys in the finals. As the time progressed, things started getting real hot with guys throwing down things they have never done or haven’t done in years. Everyone was vibing so well that once the clock ran out, nobody said anything and just let the guys keep going. It was an amazing decision since that’s when two double backflips came out (Hucker and then Luke Parslow) over the big booter, Dennis was destroying the shark fin, Doyle was dropping 720’s mid set and everyone in general was pushing it harder than any of the riding seen the entire weekend.
It wasn’t until Brian Foster went down with a possible torn ACL and the light was fading that the riders decided it was time to shut it down and cast their votes. It was apparent to everyone who would be taking home the cash this weekend.

I’d like to send a huge shout out to Red Bull for organizing one of the most amazing and relaxed contests ever. This is definitely one event that will go down in the history books as how things should be done in BMX.

Don’t forget to check out the qualifier photos right here.

The past few days have been, well, a dream. Red Bull gave Anthony Napolitan and his team of builders (Adam Aloise and Cody Nutter to name a few…) free reign on the hills of Coffee Mill Ski Resort in Wabasha, Minnesota to build the best possible dirt course they could. With months of secrecy for organizing and building the course, it was finally unveiled with a video that melted minds. Fast forward a few weeks and some of the best dirt riders in the world are flying into Minnesota wondering where the hell they are.
Thursday was the first official practice day, and Friday brought the qualifiers. This contest was ran entirely different than any other contest because the format was very loose. Eight riders would get a one hour heat to get as many runs down the mountain as they can, while the other eight riders would be judging them. After both heats went through, four riders from each heat were picked for the finals that would take place the following day.
Above you can find 56 photos from qualifiers that went down Friday afternoon shot by yours truly. If you would like to see the images in their full size just give them a click.

You can now check out the photos from finals here.

So this one is awesome, but at the same time it disappoints me. It’s awesome because Red Bull gave Anthony Napolitan the chance to do a private dirt setup in a real secluded place in Minnesota and it looks like it turned out amazing. It’s disappointing because this went down literally 40 miles from where I live and they kept it such a secret even I didn’t even know it happened until it was over. Disappointing. Oh well, good stuff.

We were there to film all the fun times, a few highlights include the countless hours of didgeridoo and band practice on the road, Richo’s appearance on Bondi Rescue, Girsch sessioning some street spots in Sydney, and the resulting boxing matches from spending all week together in a campervan.

“It’s become tradition on the Roughing It Tour to mess with announcer/photographer Fat Tony’s bike, and this year Allan Cooke and Anthony Napolitan walk through how to double or triple the weight of your friend’s bmx bike.” 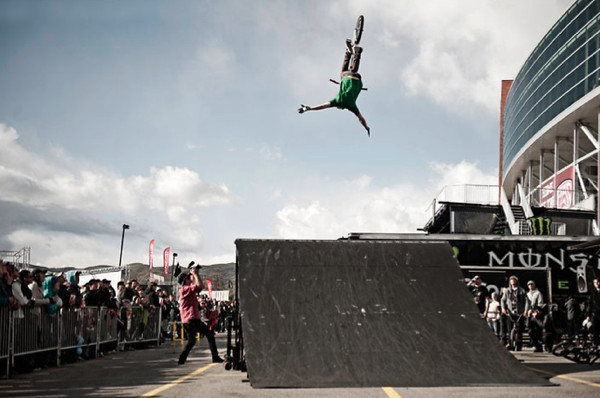 It would appear DC is making moves to expand their BMX program. They announced today the addition of nine, yes nine, new riders. The new pro team riders consist of Brett Banasiewicz, Jeremiah Smith, Craig Mast, Hucker, Anthony Napolitan, Alfredo Mancuso, Kelly Bolton, Brad Simms and Ryan “Biz” Jordan. All of which, other than Maddog (who left Etnies for this opportunity) have been repping the brand for a while now through their flow team and such.

What does this mean? Well, I’m going to assume a whole bunch of edits popping up. Maybe they have a new full-length video in the works? That would make sense with a line up that powerful.

“Anthony Napolitan, Brandon Dosch, Brett Banasiewicz, Ben Wallace, and many more compete in Duisburg, Germany at the most recent Extreme Playgrounds contest. How wild is Maddog’s frontflip tailwhip to no hander?” – Vital BMX

Filmed and edited by Timo Stabentheiner