Can you ever pass up a new Tom Justice video? The answer is NO. The crew at Asylum Skatepark released this new one featuring Tom absolutely crushing it as always with big air tricks to technical lip tricks. You know Tom never disappoints, so get on that play button right now.

Tom Justice is the complete BMX package, massive tricks accompanied with style and a tech game to die for. Watch as he rips around his local indoor and place of work, Asylum Skatepark. All captured by the man himself Matty Lambert. All filmed in a couple of hours behind the scenes of Kieran’s triple flair. Matty and Tom have wanted to shoot together for years and it’s a pleasure to finally make it happen. Sit back and take in this work of art from them both. Enjoy!” – Asylum Skatepark

You know it’s going to be a good day when there’s a new Tom Justice video to check out! Here’s 90 seconds of raw footage from a quiet session at Asylum Skatepark! As always, Tom delivers with a ton of effortless style, big blasted airs and a good mix of tricks. This is only 90 seconds, which is really the only downside! Can’t get enough of Tom’s riding!

“Tom knows this park like no other. Let him blow your mind in the second of our raw 90sec edits.
Enjoy.”

The 4th round of the 2019 Backyard Jam went down at the freshly revamped Asylum Skatepark before it was really officially opened. Here’s a highlight reel giving you a look at all the action from the young guns to the advanced and Pro guys that dropped in! This park looks AMAZING and the riding was just as good!

“This past weekend saw the final qualifying round of the 2019 Backyard Jam series. The Asylum Skatepark in Sutton were kind enough to open up their doors for one day a week ahead of their official opening. Take a look and see some of the highlights from the day!

This past winter was a brutal one in the Midwest. Fortunately for Steve Kolb, he had the Asylum Skatepark to ride and keep the sessions going. Although it’s hot as hell out and summer, Steve decided to put his clips together from his winter sessions and whipped up this rad new edit. As always, Steve gets super creative and does a lot of tricks most people are doing! Hit play and check it out!

“Steve Kolb escapes the brutal Chicago winter by shredding up The Asylum Skatepark bowl and the new addition to the street section. A variety of bmx tricks and stylish moves are demonstrated on the NoWear Bmx Mike Dinello Signature frame with a hint of creative riding on unique obstacles. Edit featuring clips of Matt Dykema as he contributed to filming this video. Follow Steve on Instagram @krazy_kolb and his sponsors @nowearbmx, @mudslingersbikeshop, @chicagoactionsports, @oldfatguybmx, @thebarendguy to support the midwest Bmx scene.

You cannot go wrong with a fresh Tom Justice video! Here’s a fresh batch of clips that he stacked during a few sessions at Asylum Skatepark over in the U.K! Big blasted airs, technical lip tricks and style for miles. You gotta check this one out! So damn good!

Archetype‘s team riders Sven Hackett and Karl Feix coming through with a new split edit from some of the time they spent at Asylum Skatepark over the course of the winter. This video turned out real good from the riding to the film work. Take a peek!

“Sven and Karl hitting up Asylum Skatepark. Filmed over a few sessions in the evenings over winter. Karl busted his knee really badly one session so his clips were cut a bit short!
Filmed by Zeyad Ahmad and Nick Armstrong
Edited by Zeyad Ahmad
Music by A Tribe Called Quest – Jazz

The PDSII crew made their way to Asylum skatepark for a session and ended up stacking a ton of real solid clips filled with grinds! They tossed together this new edit making for one solid BMX video worth checking out! Get at that play button to see what went down!

END_OF_DOCUMENT_TOKEN_TO_BE_REPLACED 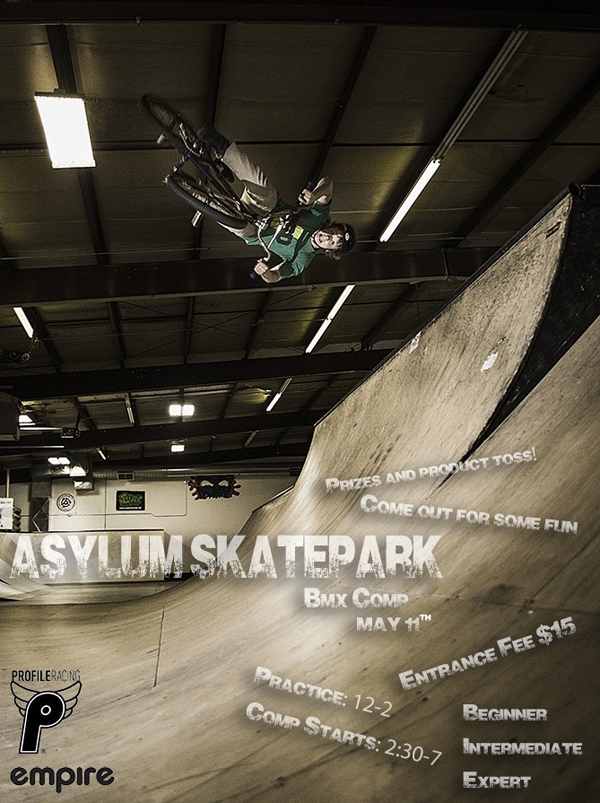 There’s a contest going down at the Asylum Skatepark on May 11th! If you’re in the Lake Bluff, Illinois area, I suggest you make it to this for some good times!