Thinking about getting a new set of cranks, but you aren’t sure if you should run 19mm or 22mm spindle?

This weeks Tech Tip from Profile Racing takes a look at the difference between their classic 19mm Race Cranks and their 22mm Column cranks and what size you should run based on your riding style and preference. This talks about a few of the Pros and Cons of both sizes and gives you examples of what each the riders on their team run for cranks. You can check out the tech tip on the Profile Racing Website!

One thing they don’t cover in this is the 24mm crank arm size that a few brands also offer. This size has been pretty commonly looked at as overkill for many riders, but there are a bunch of guys out there that could benefit from that larger size as well. Either way, 19mm, 22mm and 24mm are all options. 19mm is the most common and 22mm being the second most common option for the riders that are harder on cranks.

What do you run? Let us know what size and why in the comments below!

If you’re feeling like you need some gold in your life, Kink have you covered!

Kink have released their Foundation 2 Fork, Pillar Cranks and Solace 2 Bars in this new metallic gold colorway that looks real shiny and nice. If you’re digging the color and want to add some shine to your bike, this might just be what you need. The fork, cranks and bars are available through BMX shops and mail-orders that carry Kink BMX worldwide now. 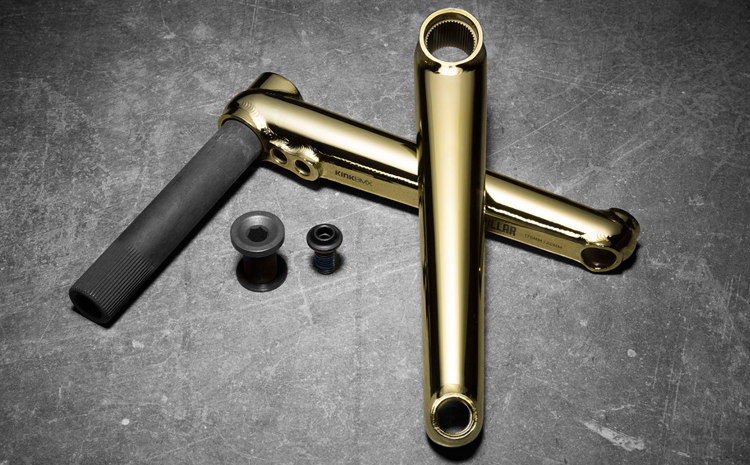 The Pillar Cranks in this new gold colorway. 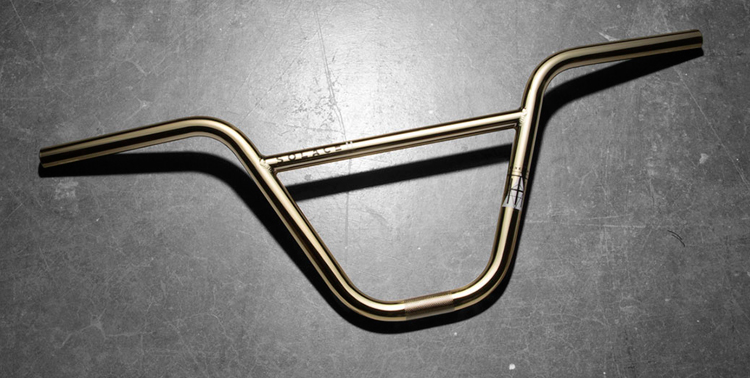 Odyssey have made their Thunderbolt Cranks even more affordable… 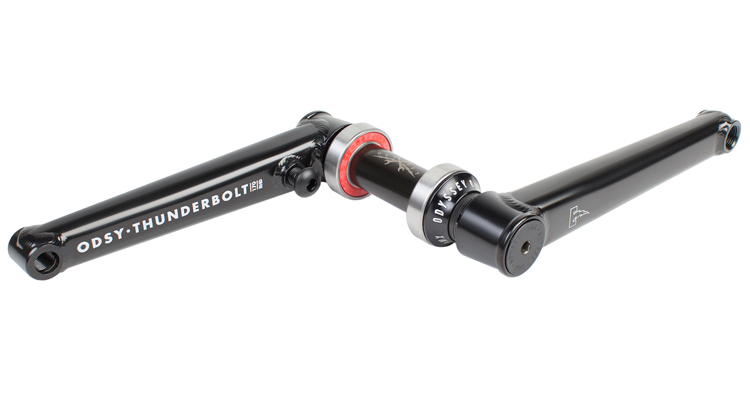 Are you due for a new set of BMX Cranks? Thinking about picking up Odyssey‘s Thunderbolt cranks? Well, you’re in luck because they have just released their Thunderbolt+ Cranks that now come with a Mid bottom bracket included, and some updated graphics.

The Thunderbolt+ cranks are made from Odyssey’s 41-Thermal heat-treated chromoly that use a 2-piece system that utilizes their Wedge Cluster band and Never-Wobble™ crank arm and spindle interface guarantee with an updated open-ended spindle cap and traditional bolt-on sprocket interface. The cranks have a 22mm spindle and are available in right or left side drive, lengths of 165mm, 170mm and 175mm with a weight of 1 lb. 11.8 oz. and black for the only color option. Since these cranks are 41-Thermal heat-treated, they come with Odyssey’s Lifetime Warranty, which is another great perk.

You can pick the Thunderbolt+ cranks up for $189.99 through BMX shops and mail-orders that carry Odyssey worldwide now! 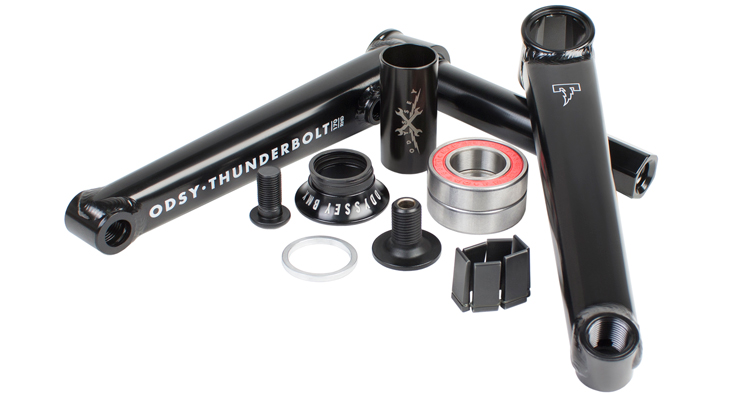 All of the parts for the cranks in one package… Easy to install!

What do you think? Do you have any questions? Let us know what’s on your mind in the comments below!

Not quite what you’re looking for? Check out more BMX Cranks!

Are you due for a set of new BMX Cranks? Have you given Kink‘s popular Pillar Cranks that have been apart of their line up since 2011? These long lasting cranks are built to take some heavy abuse and they show you just how they accomplish that in the flipbook below!

“Learn more about what makes the Kink Pillar 24 Cranks so popular and reliable.”

The classics keep on coming from GT Bicycles. Let’s take a look at the new and improved Power Series Cranks! 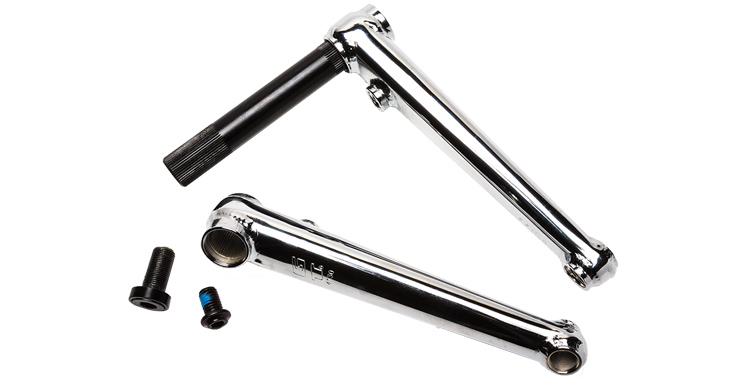 If you have been riding BMX for a long time, there’s no doubt that you’re familiar with the Power Series Cranks from GT Bicycles. These cranks were a staple in history of BMX cranks. Fast forward to 2017 and GT have re-released two versions of the cranks; chromoly and alloy.

Up top you can find the chromoly Power Series cranks. These full 4130 chromoly cranks start out with tubular 175mm arms with sprocket bosses on both arms making them right and left side drive copatible. The arms are attached to a 19mm, 48-spline hollow chromoly spindle that allows you to easily run Spline Drive Sprockets if you prefer. Everything is held tightly together by flush mount bolts.

The Chromoly Power Series cranks are available in 175mm only, weigh in at 28.9 oz., chrome for the only color and a price tag of $129.99 through BMX shops and mail-orders that carry GT Bicycles worldwide now. 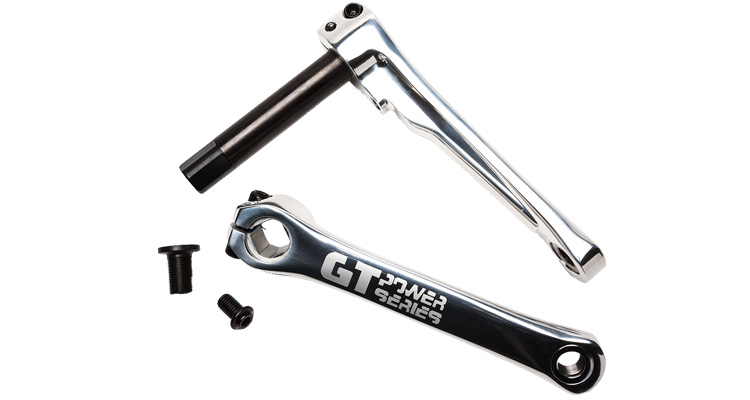 The original Power Series cranks that started it all. These modernized cranks are made from forged 7050 aluminum with steel pedal inserts, sprocket bosses on both arms making them left and right side drive compatible and 175mm length. You can even find a laser etched logo to match the classics on each arm. The arms are attached to a 22mm, square spline, hollow chromoly spindle with 2 pinch bolts per arm and flush mount bolts to keep everything nice and tight.

The Alloy Power Series cranks are available in 175mm only, weigh in at 34.3 oz., chrome for the only color and also only cost $129.99 through BMX shops and mail-orders that carry GT Bicycles worldwide now.

Both cranks will undoubtedly get the job done and will look great on your bike whether it’s a retro rebuild or the bike you’re putting a beating on day in and day out.

What do you think? Have any questions? Let us know in the comments below! 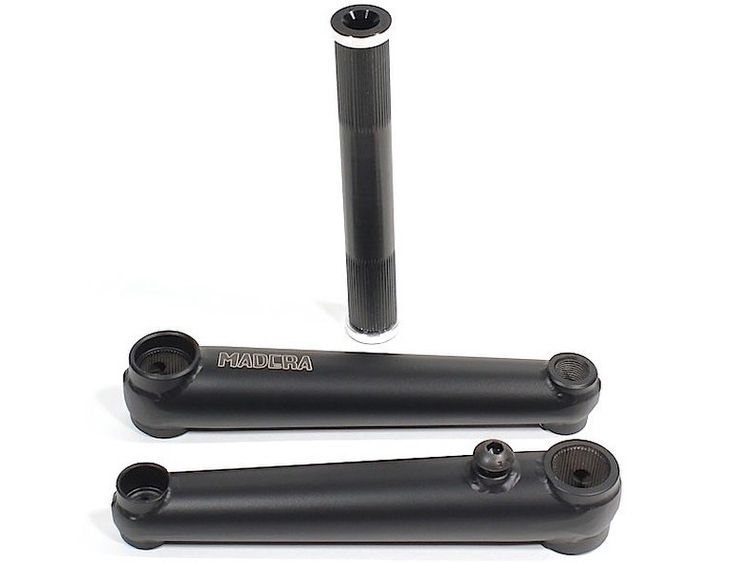 Are you on the hunt for a new set of BMX Cranks? The crew at Madera have released their new Bantam Cranks that might just be what you’re looking for. These cranks are made right here in the U.S.A in the same place as Profile Racing. The Bantam cranks start out with heat-treated, oversized 4130 chromoly arms that are built to take a some heavy abuse from riding. The arms are connected to a 22mm, 48-spline, Gun Drilled Hollow chromoly axle with 8mm hex aluminum bolts to keep everything tight. Clean and simple design to make things easy.

You can pick up the Bantam cranks from Madera in matte-black only with a 165mm and 170mm sizes and a weight of 30.04 oz.. These also come with a LIFETIME WARRANTY to the original purchaser, which is always a huge perk. You can pick these up through BMX shops and mail-orders that carry Madera worldwide now for $167.99 now.

Want to see how these BMX cranks are made? Check out this video showing you how they make the cranks down in Florida below!

What do you think of these cranks? Do you have any questions? Let us know in the comments below! We’ll make sure to get you an answer!

Here is one for you product nerds that love seeing how things are made! Madera just dropped this video showing you how their new Bantam Cranks are made down in Florida! This starts out at the drawing on the computer and takes you all the way through the laser etching and packaging. It’s a pretty amazing process and interesting to see just how BMX cranks are made!

Also, here’s a video Tour of the Profile Racing and Madera warehouse we did with Matt Coplon a while back.

The newest product from Madera BMX is: 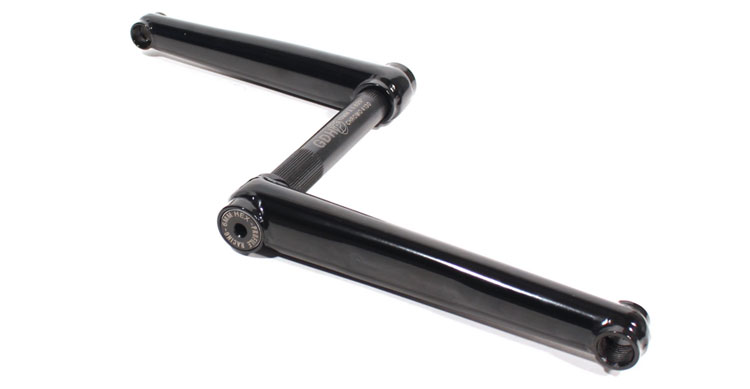 Profile Racing have released their latest Tech Tip for you to check out. This time around they have focused in on their No Boss Cranks. Bossless cranks are for those of you who prefer Spline Drive versus the traditional cranks that require a bolt to hold your sprocket in place. There’s Pros and Cons for both styles of crank arms and Profile give some insight on both. You can check out the Tech Tip right here — Tech Tip: What Is A Profile No Boss Crank