Here’s a throwback for you! Clint Millar has begun uploading the old Prody videos he did back in the 90’s! Here’s the very first one from 1994 that is 50 minutes of old school goodness featuring Clint and a bunch of others. It’s pretty wild to think about the process of producing a video like this back then compared to how it’s done now days. Either way, there were only 10 copies of it, so it’s very likely not too many people have seen this one until now! Hit play and take it all in!

Featuring riding from all over Australia but mainly evolving around the Brisbane BMX scene.
At a time in BMX when rider numbers were at an all time low, the passion & love for BMX was stronger than ever though. If you saw another BMXer, you instantly knew they were into BMX as much as you were. BMX at it’s purest.

Here’s one for the riders out there that like to hear some awesome stories from the past! Vital BMX founder and all around good guy Brad McDonald got on a video call with Mat Hoffman to discuss a bunch of old photos that Brad shot of Mat, and the talk about the stories behind them, along with side stories that came up along the line. This is a suuuuuper good watch, so hit play and enjoy this!

“BMX icon Mat Hoffman shares stories with Vital BMX founder Brad McDonald about some epic photos shot from 1991 – 1993. From giving himself stitches to breaking semi trucks in half, Mat has lived through some incredible adventures that you’ve never heard about!” – Mat Hoffman

Take a closer look at all of the photos here!

Did you catch Dennis Enarson’s Haro Destinations piece the other day? Well, here’s your chance to get a little behind the scenes look into the photoshoot that went down for that and to get some insight from Haro’s John Buultjens to learn a little more about the project!

“Dennis Enarson teams up with legendary BMX photographer / Vital BMX’s own Brad McDonald to capture the essence of a beautiful day in beautiful San Diego for Haro’s Destinations campaign.

END_OF_DOCUMENT_TOKEN_TO_BE_REPLACED 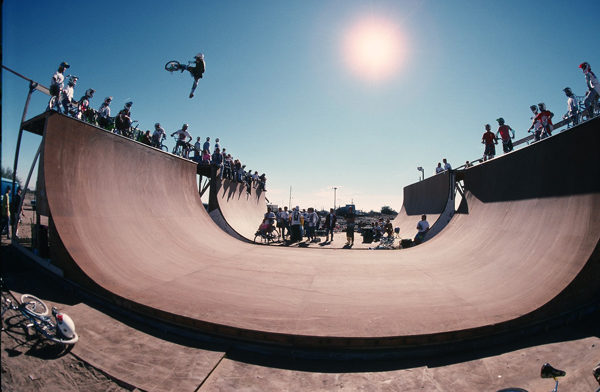 Vital BMX owner, Brand McDonald has been digging up a ton of his old photos from back in the day that he shot. Brad recently posted a gallery featuring photos from 1990-1992 with names like Mat Hoffman, Dave Mirra, Dennis McCoy, Jay Miron, Fuzzy Hall, Robbie Morales, John Povah and more that you can find. Hit this link and take a look.