I’m not sure where K-Town is, but I can tell you that this edit features a days worth of riding from Jackson Ratima, Chris Brown, Robbie Owen and Clay Johnson that Nate Richter collected. All of these guys bring some real good riding to the mix, and there’s definitely a good feel to this. Take a peek!

Stolen caught up with Jackson Ratima recently to follow him around for a day to check out what he was getting into. Take a peek! Looks like it was a good day to me.

“Follow Jackson Ratima through the day as he pays a visit to Tip Plus and the STLN US office. Guest starring Chris Brown and Dave Escobar
filmed/edited: Chris Bracamonte
song: People Under the Stairs – Down in LA
camera: Panasonic HMC-150“

Filmed and edited by Miles Rogoish

Damn! This new Ride BMX dropped from a heavy session that went down at Tip Plus is so good. You definitely want to check this out!

“A lot of Tip Plus riders were hanging around the building last week and riding the semi-new ramps that have been seeing some action as of their existence. Check out a few sessions of riding from JJ Palmere, Shawn McIntosh, Miles Simone, Timmy Theus, Chris Brown, Anthony “Boy” Flores, and Jackson Ratima. Thanks to Aaron Brennar for the assistance with the camera.” – Andrew Brady 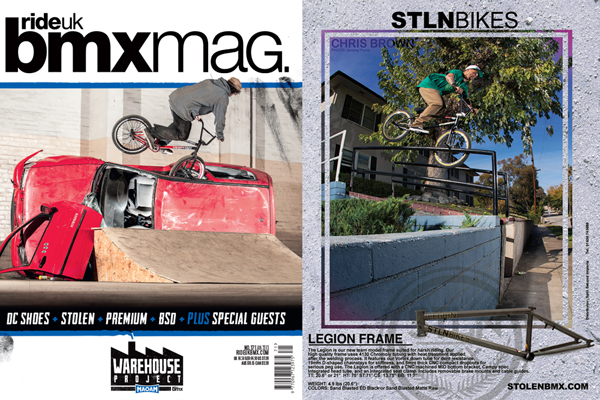 If you are anything like I was growing up as an aspiring photographer, then you might be curious as to how the ads come about in all of the magazines. Sure, it’s obvious that someone shoots a photo and then it shows up in the mags but there is clearly a lot more to it then that. How does the photographer get picked? How much does the photographer get paid? Does the rider get paid? How does a company decide on which team rider gets the ad? Which magazine will it go in? If I remember correctly I got lucky and the first legit ad that I got in a magazine was an old Haro ad of a rider from Ohio by the name of Dustin Bauer. I used to live/ride with him in Upstate New York and he ended up getting on Haro during that time. One thing led to another and the next thing I know I had a two-page spread ad for Haro in Ride and I honestly couldn’t have been more stoked about it. Fast-forward to now and the newest ad that I shot happened to be for Stolen and features the rail wizard Chris Brown. Anyone that knows Chris knows that he has a true do-or-die mentality and will double tire, feeble and manual round rails all day. Read on to find out how the ad came about from start to finish and learn what happens when you push your luck.

END_OF_DOCUMENT_TOKEN_TO_BE_REPLACED 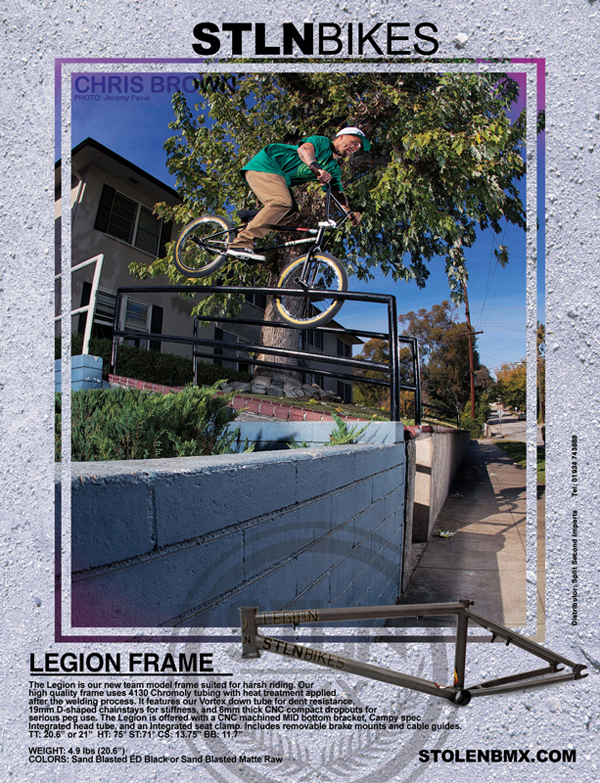 Here’s a look at Stolen‘s latest print ad featuring Chris Brown and their Legion frame. This can be found in issue 171 of Ride UK

Photo by our own Jeremy Pavia.

Last week we announced that Chris Brown had joined Stolen. Now today, they dropped this brand new welcome edit announcing that Jackson Ratima has also joined the Stolen team. There’s footage from Chris, Jackson and a few others from the team for you to enjoy. Take a peek!

“We’re proud to announce Jackson Ratima and Chris Brown as the latest additions to the Stolen US team. Since they’re both located in Southern California we met up at a couple local skateparks to get together and chill. Sean Morr, JJ Anderwald, and Paul Alfaro (product design) were in town and able to make it out. Thanks to Shane McLellan for being the dude behind the lens/computer and making this mix edit happen.
Camera: Canon 60D & Panasonic HMC 150
Song: Bsidez Beat – Stuck on the Tarmac”