Do you ever think about something you haven’t seen in a long time, then all the sudden it pops up? The video of Dave Mirra riding the basketball hoop popped in my head the other day, and then Snakebite just uploaded this old DC Shoes commercial featuring Dave wall slapping the backboard. This is one of those ads that is burned into a lot of BMX riders minds and likely causes you to think about it every time you see a basketball hoop!

If you’re digging this, you can check out the behind the scenes video from this shoot below!
END_OF_DOCUMENT_TOKEN_TO_BE_REPLACED

Snakebite coming through with another classic for you to start your weekend off right! Here’s the full Fox Racing “Expendable 3” video that has an absolutely legendary lineup of riders! The video was released back in 2002 and features riding from Ruben Alcantara, Fuzzy Hall, The Shadow, Dave Mirra, TJ Lavin, Colin Winkelmann, Alan Cooke, Chris Doyle, Taj Mihelich, Brian Foster, Bruce Crisman, Luc-E, Mike Laird, Josh Harrington, Chad Kagy, Colin Mackay, Nate Wessel, Ronny Chalk, Punjab and more! This ha a little bit of everything from street to park, trails and flatland. Needless to say it’s a damn good watch, and I personally can’t even count the number of times I watched this one when it came out 19 years ago.

Here’s a bit of surprising news we didn’t expect to see. Based on an article we found on Bicycle Retailer, it looks like Dave Mirra‘s brand Mirra Co. that he started after parting ways with Haro Bikes is up for sale or for licensing. Over the years the brand has been sold or licensed out to brands like Trek, and the brand is currently licensed out to Haro Bikes, but their license ends in November. Here’s a bit more from the company selling / auctioning the brand off…

“Hilco Streambank, a leading advisory firm specializing in the sale of intellectual property assets, is seeking offers to purchase or license the intellectual property associated with the Mirra bike brand, founded by the legendary BMX freestyler Dave Mirra. Offers to buy or license the brand are due on May 2, 2019 at noon Eastern time. An auction will be held on May 6, 2019 at 10:00 a.m. Eastern time. Information regarding the opportunity is available here.

Dave Mirra, a member of the BMX Hall of Fame, founded MirraCo with industry veteran Jim Ford in 2006. Dave is well-recognized as a pioneer in bringing freestyle BMX into the mainstream, having held the record for most X Games medals in BMX Freestyle (24) until 2013. Despite his untimely death in 2016, Dave Mirra’s name is etched in the minds of BMX enthusiasts worldwide, as well as a broad cross-section of action sports-oriented people.

“A buyer or licensee of the Mirra brand has an opportunity to capitalize on the increasing popularity of youth cycling,” commented Hilco Streambank senior vice president Richelle Kalnit. “The number of people riding BMX bikes has more than doubled between 2012 and 2018, and the youth market is poised for significant growth, fueled by inner city youth and the introduction of BMX Freestyle Park at the 2020 Olympic Games. A buyer or licensee can build upon a brand that is known in the marketplace, having been licensed since inception, and expand into other categories.”

Based on the info, it sounds like any offers are due by May 2nd, and then, assuming, there will be an auction on May 6th if the right offer doesn’t come in before then. You can check out more details right here.

We have no idea what the price target is, or what it could really fetch since we’re not 100% sure on some of the analytical numbers they company selling presented like the 1.6 million total BMX riders in 2012 versus the 3.44 million total BMX riders in the world in 2018, or the 43% growth between 2012 and 2016, but we’re sure there had to be some research involved in that. Either way, it’s interesting and we are curious to see what it sells for and who ends up buying it!

What do you think? Can you come up with the money? Let us know in the comments below!

This is so rad. As some of you know by now, Nick Sawyers is a phenomenal artist and he’s done a ton of really cool projects over the years. This new one for Woodward East is amazing. Nick did a mural for Dave Mirra who BMX lost 3 years ago. Hit play to get Nick’s perspective on what went into making this one.

“Today 3 years since the passing of a legend. Dave Mirra was truly a larger-than-life rider who will always hold a special place in our hearts here at Woodward Camp. He will be forever memorialized on the BMX cabin thanks to our friend and amazing artist Nick Sawyers.

That’s a wrap for BMX at X Games 2017! The final event of the day was the Dave Mirra Best Trick contest and Kyle Baldock took the top spot with a 720 Double Tailwhip! Check out the clip of Kyle getting the trick done down below!

Wow, this is amazing. Shad Johnson just uploaded this old Dave Mirra and Ryan Nyquist Adidas video from 2000 that features a ton of amazing riding and interview with Dave and Ryan! It’s pretty crazy to think this was made 17 years ago and how things have changed, and how some things have stayed the same, since then. Highly, HIGHLY advise you give this a watch! RIP Dave…

“I have been sitting on this video for a little and I’m pretty sure most people have not seen it since i think it was made as a promotional item for Adidas when they had a BMX team in the late 90’s to early 2000’s. There is some awesome riding from a very young Nyquist and Mirra in his absolute prime!
Definitely worth a watch just to see these to legends put in work!
” – Snakebite

It keeps blowing our minds how many legends appeared in the “Chasing The View Off The Cliff” BMX video that came out on VHS way back in 1994. This fairly unheard of video was aheads of its time for sure. The crew at Snakebite just uploaded Dave Mirra‘s section that’s packed with amazing riding from vert ramps to box jumps and it will remind you how insanely good Dave was even at a young age. Hit play and take in another incredible section from the legend. 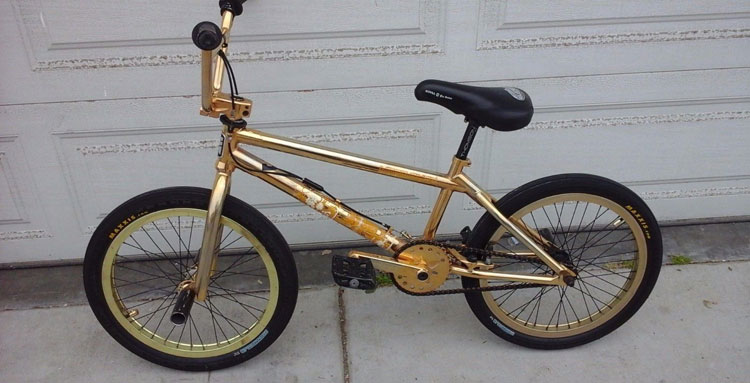 What if we told you that you could own one of BMX’s most iconic bikes for a cool $50,000 cash? Here’s a little something we spotted over on Ride BMX that caught our attention! It looks like Dave Mirra‘s 24 Karat Gold Plated bike he rode in the X Games had been put up for sale on eBay for $50,000. The auction is over now, so we’re not 100% sure if it was sold or if the seller decided to go a different route, but it’s still kind of a crazy find. The listing is still live, but closed for bids, for the time being. Check out more photos and details right here.

With the price of gold and it clearly being Dave’s bike that he rode (photos / story seems to match up), it isn’t a completely crazy ask for the price. What do you think? Would you buy it if you had that cash on hand?

Just incase it comes down, here’s the text that was on the eBay listing…

“This is a bike that I bought directly from Dave Mirra after doing a polishing restoration article on it in BMX Plus Magazine years ago..I have owned this bike for years. The bike is real 24 carat gold plated for him by Haro for the X Gamrs.After almost a year went by as I was restoring his Dyno Slammer . I asked him why he never wanted the bike back he said he would pick it up in a few months and it wasn’t really one of his favorites since he crashed on it in his first run in X Games at Staples Center in Los Angeles where he couldn’t even make his second run. On that note I asked if he would ever consider and selling it and he said of course I would sell it to nobody but you Mark and we made a deal and that’s how it went down that I made payments over several months to him. It made him happy to see me bring it all over to shows and have everybody ride it and send Dave the fun pictures and that’s what really made him happy seeing his friends and fans on it. This bought to the continuation of this bike touring with me and his life for him through what I did with it… Now I can no longer do that with him gone. It’s a sad thing to look at on a daily basis chained with a 20 ton chain. It’s time for me to let this prize of a bike or Holy Grail go to a good home, collector or a museum of some sort for the world to display. It is unaltered exactly the way he had it including the black electrical tape holding the brake cable to the handlebars. When I originally got this from him it did have pitted surface rust on the bottom and the rear hoop wheel which was change sometime in the X Games contest and the tear in the seat was also there no it has damaged change this bike in any manner shape or form besides what are your sins gold-plated Hutch trickstar this is the Holy Grail and truly missed.. I am doing the right thing I don’t need any negative publicity or feedback this is my property and I’ll do as I please with it if it brings over x amount of dollars I would like to select a possible place to leave some funds that will help. THIS IS A PICK UP ONLY SALE WITH CASH. NO PAYPAL. I SUGGEST CALLING MY CELL WITH ANY QUESTIONS OR NEGOTIATIONS YOU WOULD LIKE TO MAKE. 714 488 0688.

I have been offered more than this asking price by multiple people. The bike rides grest. I just took it on the boardwalk and as usual people know the bike and freak out needing pictures etc. Ivery iclued a phot of the day I paid DAve off for the bIke ill never for get driving my 86 year old dad from Alb any to Syracuse in a snow storm to pick up the bIke .. please follow my instructions about no PayPal and if someone decides to do it they will pay all of the fees and nothing will be handed over until those fees run through the bank and cash into my hand and that is that so I suggest using my phone and speaking with me about this thank you so much good luck and I can only pray it goes to the right place and Dave is watching with a smile R.I.P.”