Fit Bike Co. finally got around to uploading Ethan Corriere‘s official welcome to the Pro team video that came out a few weeks back. We figured it was too good to pass up, so here it is for your viewing pleasure! Hit that play button and take a look at some heavy clips Ethan stacked to make the bump up official. Ethan is a crank arm grind wizard.

“Ethan Corriere landed a spot on the PRO squad on Jan. 1, 2016. He worked on this Welcome Edit for a few months after he earned the bump, and if you haven’t seen it yet, it’s a much watch. Bald is beautiful. HB, Calif. represent!

END_OF_DOCUMENT_TOKEN_TO_BE_REPLACED

Billy Perry back at it again with another Daily Cruise from the streets of New York city! This time around Billy, Anthony Panza and Ethan Corriere spend some time cruising spots and spending some time on one of the many bridges in the city to get from spot to spot. As always, there’s some great riding along with a good look at the sights this city has to offer.

“DailyCruise 11: We spent the majority of the day riding BMX on spots near/on the Williamsburg Bridge. Ethan Corriere was also in town so a heavy session was mandatory. Great times were had while filming this. Subscribe for more BMX Videos!

Curious what one of Fit Bike Co.‘s newest pro team rider, Ethan Corriere is running for a setup? Hit the flipbook above to take a closer look at his fresh new WIFI V2. setup along with a full parts list! Looks like a dialed unit to us!

END_OF_DOCUMENT_TOKEN_TO_BE_REPLACED 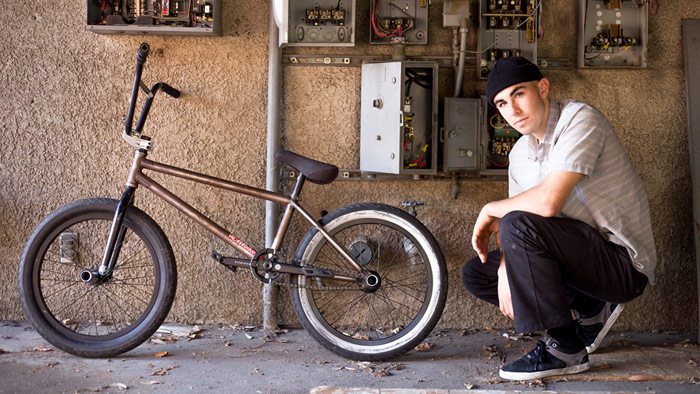 Well, if you didn’t see this coming you probably haven’t been paying very close attention to BMX lately. Fit Bike Co. have announced that they have given Ethan Corriere the bump on up to their pro team for 2016. Ethan has been putting in some serious work for a while now, so it’s definitely an earned spot! Expect big things from this guy in the near future.

END_OF_DOCUMENT_TOKEN_TO_BE_REPLACED

You know things are going to get heated when the Common Crew roll through! Some of the guys recently caught a session at the Vans indoor park where they went to work stacking clip after clip of pure gold. Hit play and check this BMX video out!

“The Common Crew rides the Vans Park in Huntington Beach on the regular, so you know when they decide to get the camera out it’s going to be worth watching. Jacob Cable, Devon Smillie, Justin Spriet, Ethan Corriere, Trevor Sigloch, Denim Cox, Julian Arteaga, and a few local friends turn the special meter up and get to business.

Special thanks to Vans

END_OF_DOCUMENT_TOKEN_TO_BE_REPLACED

There’s no denying that Ethan Corriere has been on fire for a long time now and it doesn’t look like he will be slowing down any time soon either. Check out this brand new BMX video Fit Bike Co. just released featuring Ethan putting in work on street spots he has been cruising as of late. This is one video that does NOT disappoint!

“Ethan Corriere has been a KEY holder for a minute now, but this is his first official edit for us and boy howdy, baldie went in! Corriere filmed this with his Common Crew boo Francis Castro over the last five months, snuck SF-it in in between, and we’re pretty sure you’ll be enjoying lots more goodness from Ethan very soon.

END_OF_DOCUMENT_TOKEN_TO_BE_REPLACED

Fit Bike Co. giving you a close up look at their 2016 Pledge complete while Ethan Corriere puts in through the paces! Looks like a solid BMX bike to us… Check out more below!

“The 2016 PLEDGE, is a preppier, collegiate-inspired complete perfect for all you school-yard and street shredders. You can be the new kid on campus and still look legit on this bike!

Filmer/Editor: Francis Castro
Music: “Had It All” by Allah-Las”

Check out more photos of the bike below…

END_OF_DOCUMENT_TOKEN_TO_BE_REPLACED

Have you ever watched a BMX video that really made you feel like you’re in an older generation of riders than what’s going on right now? This video Fit Bike Co. released from the trip that their young guns Justin Spriet, Matt Nordstrom and Ethan Corriere took to San Francisco did that exact thing for us, haha. Not to say that we don’t love this video.. We’re just wondering how the hell these guys are old enough to get a rental van now, haha. It’s also clear these guys are the future of BMX as well. Either way, this BMX video is over 9 minutes of pure GOLD from the trip. It’s broken down into sections with Ethan up first, followed by Matt and then wrapped up with Justin. This is a MUST See video for sure..

“A few weeks ago, Fit youngbloods Justin Spriet, Matt Nordstrom and Ethan Corriere, along with filmer/editor Francis Castro, commandeered the new 15-passenger van, christened it the Fiteen and motored north to San Francisco.

A few days in the ‘City by the Bay’ later, the boys had amassed this montage of radness we’re delighted to share with you today. SF-it. Enjoy.

Filmed/Edited by: Francis Castro
Music:
“Blue Suede” by Vince Staples
“Eskimo Blue Day” by Jefferson Airplane
“You Are Gone” by The Delfonics”