There were more cameras than sleeves at this years Swampfest and the footage has been popping up online all over. We have shared a few videos so far, but here are a few more if you haven’t had enough yet. To be honest, all of these videos have a lot of the same footage from different angles, but it’s still worth a look if you missed out!

“OOOOOOOOoooooohhhh boy. Warm swamp water and bike tricks. All the rage this year at swampfest 2019. Hey Trey, Thanks. Hey Florida, Thanks. Hey everyone that did crazy stuff so I could make a video about it, Thanks. – @steadyshotdon” – Powers BMX

“Craziest BMX Event ever? Swampfest Florideah 2019 / RAW + POV !
thanks to our contributor Brian Gregor for sending in that exclusive footage! what a crazy event!! ” – Woozy BMX

“Ed and the boys made their way down to swamp fest to party their faces off, ride in monster trucks and try their best to get injured. Denim actually won the damn thing and was awarded a free trip to England for Battle of Hastings courtesy of Source BMX! Big thanks to Trey Jones for putting on the event of the decade and Cult Crew for flying our boy out to capture the mayhem!

Take a look into Swampfest 2019 with riders Cory Berglar and Scotty Cranmer! Also watch the highlights of the best action from Scotty’s Obstacle Course, it was for sure a tricky one claiming a lot of new members to the swamp.
Enjoy!” – Hyper BMX

The footage from the FloriDeah Swampfest is starting to pour in! Here’s a video Ride UK put together giving you a look at the madness from the riding to the partying. Hit play and check it all out!

If you want more, make sure you check out the 2019 FloriDeah Swampfest Highlights from the Our BMX guys.

The dust has settled and it sounds like everyone made it out of the swamp alive…Possibly. Here’s a look at the highlights courtesy of Our BMX from the different events from the loop to the Subrosa rail and much, much more. There was no shortage of mud and madness. After you watch that, scroll down and check out Scotty Cranmer’s video as well. Expect to see plenty more from this one since there looks like there was no shortage of cameras out!

“BMX, pallets, mud…who knew it was such a good combo? Florideah Swampfest never disappoints and here’s the full highlight video featuring all the action from the ridiculously sketchy and unpredictable ramps to the perfect dirt jumps to the 80 foot long rail over a lake, to the horizontal loop, to the…you get the idea. Thanks to Trey Jones and everyone else who helped make this event possible.” – Our BMX

“The 2019 Swampfest BMX event is right around the corner and we are getting ready building our obstacle course and all the channel crew are showing up at the airport and we have special guests arriving all day long! We all went to ride the ramps and all the guys decided to have an open loop back flip challenge and things got pretty crazy! This is the before video and the next video will be the obstacle course challenge!” – Scotty Cranmer

The time has come for the 3rd annual FloriDeah Swampfest! The Our BMX crew were there early to take in the first sessions with riders slowly starting to pour in from all over the world. This is bound to be one hell of a weekend and it’s safe to say everyone is already having a good time! Check out what’s been going down so far!

“The gates officially opened today for the 2019 Swampfest and everyone got their first taste of the wild streets obstacles, the trails, and more… Here’s a raw mix from day zero and a little foreshadowing for all the wildness yet to come tomorrow.” – Our BMX

With every year, the FloriDeah Swampfest keeps getting gnarlier and gnarlier. With this years jam going down tomorrow, it’s already looking like things are going to be real crazy. Here’s a video where Trey Jones gives you a full tour of all the setups that will be up for riding from a double loop to trails, the Subrosa Street Rail setup that’s 60 feet long over a swamp, to the Albe’s Van that’s been converted into a crazy kicker setup and more! Hit play and take this all in.

“The third annual Florideah Swampfest is tomorrow and it’s guaranteed to be one of the most wild contests/jams imaginable. We got a first look walk through with Swampfest mastermind Trey Jones and you can be rest assured this is the most sketchy and unpredictable course yet.” – Our BMX

With the FloriDeah Swampfest just a few days away, Scotty Cranmer decided to give everyone a sneak peek look at the Obstacle Course Challenge that was set up for the contest. This looks super hard and should lead to plenty of muddy and wet riders. If you’re headed down to Florida, you are in for a good time!

“The 2019 Swampfest obstacle course is almost fully complete and ready to ride so we decided to do one final preview to show you all just how crazy this set up is going to be! We also check out all the other crazy swampiest ramps for the other events including the full loop and the subrosa swamp rail! We also pick up the first special guest of the week and I know none of you will be disappointed!” – Scotty Cranmer 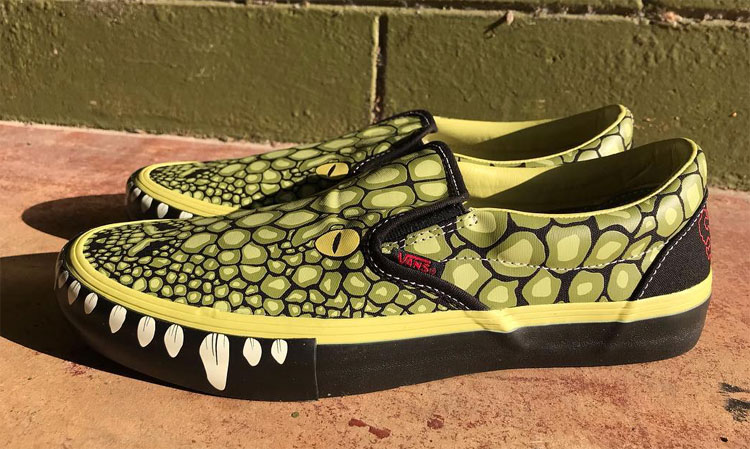 Are you heading down to Florida next weekend for the FloriDeah Swampfest? Make sure you get there early on the 30th because there are 100 pairs of the VERY limited edition Vans Slip-On’s that will be for sale. Since there are only 100 pairs that will be available, we would imagine sizes are going to be limited so these will probably go real fast. No word on price, either, but we would assume whatever they are being sold for will be worth it. These things look so badass. Check out more photos below! 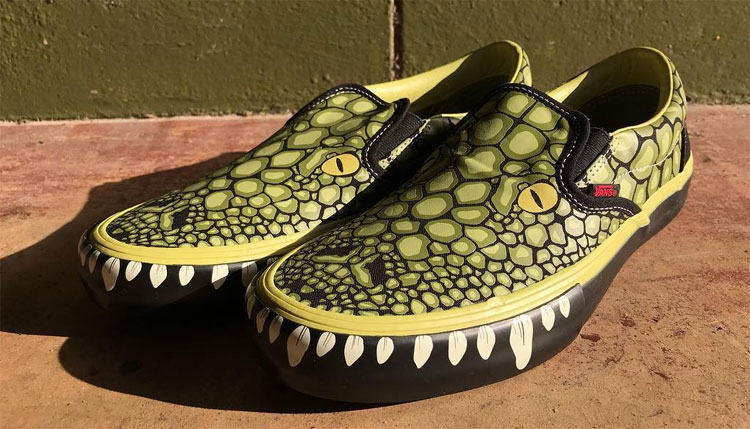 How sick are those graphics? 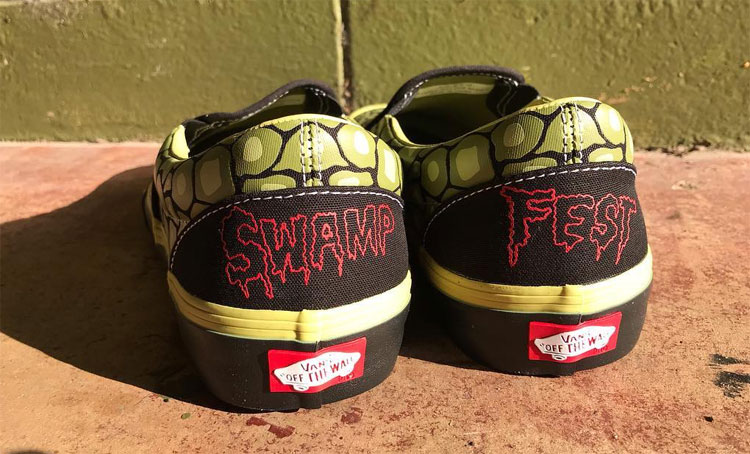 Swampfest embroidery on the back. 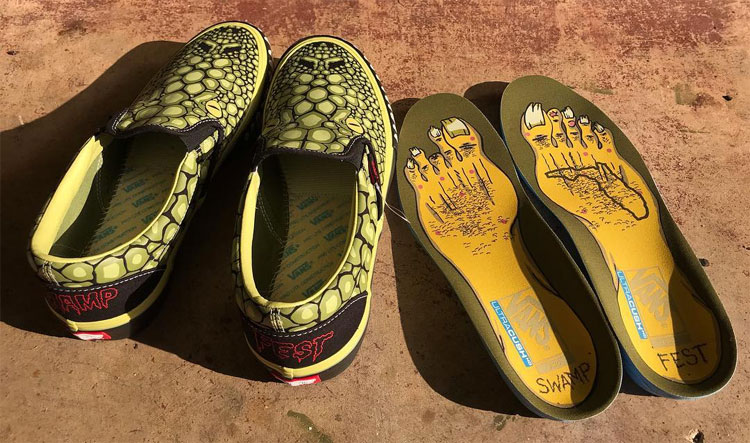 Badass graphics made their way into the insoles as well!

What do you think of the shoes? Would you pick these up? Let us know what you are thinking in the comments below!

With the FloriDeah Swampfest just a few weeks away, the build out is underway and really starting to take shape. Here’s a video Scotty Cranmer put together giving us a little preview of some of the ramps and the trails that have been built so far. Based on what we’re seeing, this is going to be the craziest setup yet!

“Crazy new ramps were built for this year’s Swampfest BMX event and we got to be the first people to ride them! Big Boy did the first Flair Challenge and Matty Cranmer did an insane jump over the van! We also got to drive a real monster truck through a mud pit! This was an awesome video!” – Scotty Cranmer