The other day Ryan Howard tried to upload the V-Club “For The Sake of the Video” DVD online, but it ended up being blocked due to copyright issues. So, instead of uploading the full video, he has uploaded Garrett Reeves section for you to enjoy. Garrett’s section was PACKED with wallrides, heavy gaps and drops, big 360’s, barspins, whips, some pedal grind action and more. Hell, he even did a wallride into a moving car which is crazy, too. This section is super good, so hit play and enjoy! It’s crazy to think this part came out in 2010 and it’s almost 10 years old!

Hopefully Ryan keeps uploading sections from this since the whole video kicked a lot of ass and we’re sure a bunch of you haven’t seen it yet.

Filmed and edited by George Boyd

Here’s the latest from the Gone Biking series. This time around we get a short but sweet video featuring Eric Lichtenberger, Garrett Reeves, Travis Kiesow and Forrest Hawk out cruising spots. This is a pretty chill and laid back batch of clips, but it’s worth a peek.

END_OF_DOCUMENT_TOKEN_TO_BE_REPLACED

It has been a little while since we’ve seen some Garrett Reeves footage pop up. Here’s a little how to video on getting proper bunnyhop wallrides from him. This is one of the more basic BMX tricks, but if you do it right, like Garrett, you can make them look awesome.

“On this Wednesday edition of How-Tuesday (sorry, had some ball ups yesterday on our way to X Games), wallride guru Garrett Reeves gives you the finer points of doing a simple bunnyhop wallride that will lead to so much enjoyment later in life.” – Ride BMX

Now this is what I’m talking about! Sunday Bikes just dropped this bike check with Garrett Reeves for you to check out! This bike is so CLEAN! Flip through the photos above to get a closer look!

END_OF_DOCUMENT_TOKEN_TO_BE_REPLACED 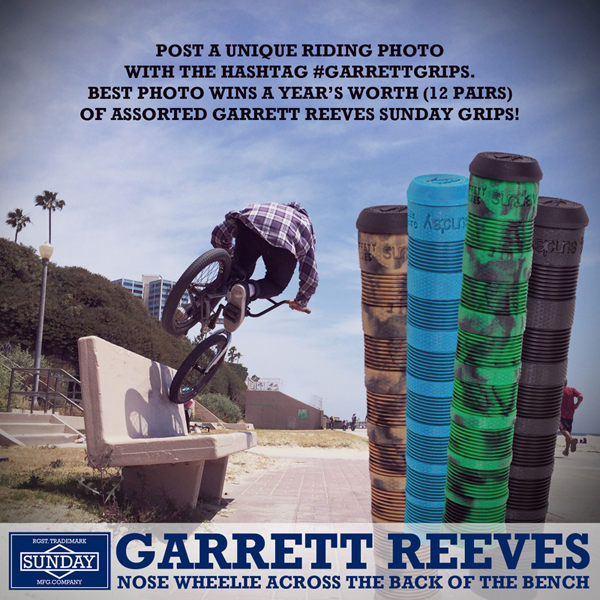 Sunday Bikes wants to hook you up with a years supply of Garrett Reeves’ signature grips! All you have to do is post a unique riding photo on Instagram/Facebook along with the #garrettgrips hashtag. The more unique the spot and trick, the better! Get creative! This contest ends May 21st so get to work! 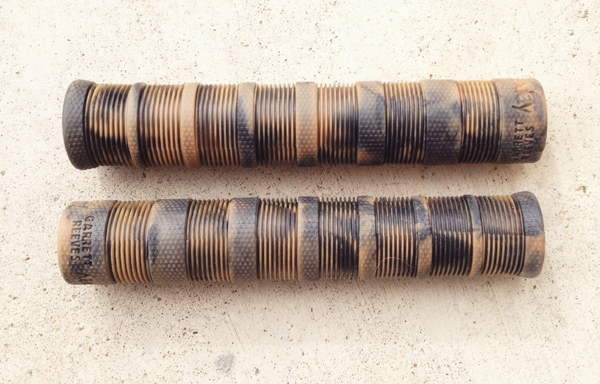 Sunday dropped this sneak peek look at the new gum and black swirl colorway for Garrett Reeves’ signature grip! These will be out in April! What do you think? Are you feeling this colorway?

Shawn Mcintosh, Tony Neyer, Aaron Brenner, Caleb Quanbeck, Garrett Reeves and Denim Cox put the Primo ramps to good use for the latest Instagram Slam. They even throw in some lines that no one called out for good measure. Good stuff!

Garrett Reeves coming in HOT with some wild new footage for G-Sport from a recent trip to Baltimore. This is definitely one video you need to check out!

“Garrett and I took a short trip to ride the city of Baltimore, Maryland and stack some footage. Baltimore is one of the cities that Garrett rode the most growing up, so now that he resides in Long Beach, CA, it was rad to see him back on home field so to speak. Garrett may be a Long Beach transplant, but I think this video does a good job at showing how his wallride-filled, spot-oriented style of riding was shaped by the East Coast architecture he grew up riding.” – Zach Krejmas