Would you look at that! Empire have uploaded their entire “Bad Idea” video online for your viewing pleasure! This video, which may or may not have been a bad idea from a financial standpoint, was definitely NOT a bad idea and turned out to be absolutely amazing. Forget whatever it was that you had to do in the next 45ish minutes and hit play on this BMX video because it’s an absolute must watch. Enjoy!

It’s that time of the week again for another round of Video Reap! The Daily Section was loaded up with a ton of damn good videos this past week. I’ve gone through and pulled out 17 of the best BMX videos featuring the likes of Alex Kennedy, Edwin DeLaRosa, George Boyd, Kyle Baldock, Logan Martin, Michal Smelko, Anthony Perrin, Chris Bracamonte, Javi Castilla, Dean Anderson, Jon “Gremlin” Betchtold and many, many more. Let’s get into this since there’s well over 2 hours of videos to watch! Check it!

END_OF_DOCUMENT_TOKEN_TO_BE_REPLACED

I’m so hyped on this new “Cool Story Bro” series that Mutiny has been doing. This time around they catch up with George Boyd to see what his life is like in Los Angeles. There’s some riding, but it’s more or less an experience of what he experiences out there and it’s absolutely amazing. I highly advise you watch this.

Oh, and Richard Forne did an amazing job with this video as well! Shout out to him!

“Next up in the Cool Story Bro series is Texas born George Boyd, who recently made the move out west to Los Angeles. Spare 5 minutes and 4 seconds of your time to learn a little more about George; from raunchy meat to being positive to awesome ditches this has you covered.
Music:
MonsterRally.Bandcamp.com
“Monster Rally is the brainchild of 23 year old Columbus (Ohio) resident and Cleveland native Ted Feighan. Producing music that is sampled-based tropical pop, Monster Rally began with the goal of assembling a bunch of old records into a completely different beast. Feighan began crafting tracks from his collection of records, combining his interests in Hip-hop, Exotica, Tropicalia, and Soul. Monster Rally creates tracks that manage to maintain a surprisingly organic sound, as if they were recorded by a full band on analog tape. There is something inherently nostalgic about the sound” – Gold Robot Records.”

Another week just went blazing by. I’m not exactly sure how it happens so fast, but we’re back at Sunday and it’s time to take a look back at some of the best BMX videos that dropped in the Daily Section. I’ve gone through and pulled out 15 of the best videos featuring the likes of Mark Webb, Tom Dugan, Aaron Ross, Anton Arnarson, Jaime Gonzalez, Dan Lacey, Connor Lodes, Christian Rigal, Tobias Wicke, Dan Boiski, Nigel Sylvester, Brian Foster, Ryan Nyquist, Phil Martin, George Boyd and more for you to kick back and check out for the first time or just to give them all a re-watch. Let’s get into this!

END_OF_DOCUMENT_TOKEN_TO_BE_REPLACED

Damn this is good. The Albion dropped this new edit of George Boyd getting some riding time in around Los Angeles. If you’ve ever seen George’s riding, you know he brings a unique approach to riding and makes everything look real effortless. You aren’t going to want to skip this one. 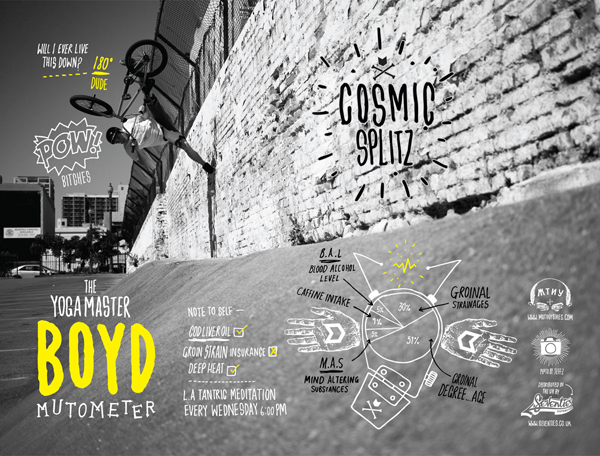 Here’s a look at Mutiny Bikes latest print ad featuring George Boyd. This can be found in issue 12 of The Albion.

I was waiting for this one to drop! Check out what the Mutiny crew got into in London. This is soooo good.

“We decided to pay London a visit during the Olympics this summer. With the city’s attention focused on the big event we had fun exploring the UK’s capital.
Featuring; Josh Bedford, George Boyd, Sean Oconnell, Robbo and Matt Roe
Music:
Crystal Fighters – At Home”

The highly anticipated Mutiny “Come Together” video is FINALLY here. Check out all 15 minutes of goodness right now! It’s a must see!