If you caught our interview with Chris Rye from Props a few weeks back, you would have heard about a video project he was working on with the late Glenn Salyers‘ girlfriend, Brooke Betancourt, as a tribute / farewell to Glen who we lost last summer. This video gives us a little perspective from Brooke on their relationship, her thoughts on him and riding from both of them. Definitely one you need to hit play on. Rest in Peace, Glenn!

“In the summer of 2015 we had planned to shoot a video with Glenn Salyers and his girlfriend and fellow BMX’er Brooke Betancourt. Unfortunately Glenn died in a tragic motorcycle accident (it wasn’t his fault) before we could start shooting. About 2 months after the accident, Brooke mentioned she wanted to put together a mini-documentary about the whole ordeal, their relationship, her feelings and where she might go from here. Needless to say, we offered to help. The resulting documentary is called “Brooke’s Farewell”. RIP Glenn, only the good die young brother.

END_OF_DOCUMENT_TOKEN_TO_BE_REPLACED 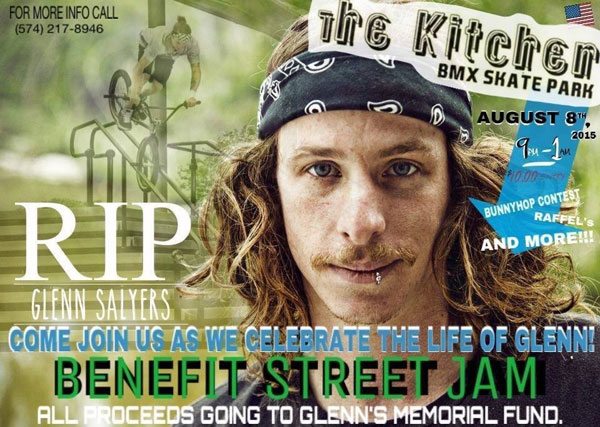 There’s a Glenn Salyers Memorial Jam going down at The Kitchen Skatepark on Saturday, August 8th! They will be having a big jam along with a few different things like raffles to help raise money to donate to the Glenn Salyers Memorial Fund! If you’re in the Indiana area, this is going to be an event you’ll want to be at, so start planning! It’s just a little over a week away.

END_OF_DOCUMENT_TOKEN_TO_BE_REPLACED

On June 13th, BMX riders from all over the place made their way to Burlington, Iowa to ride the Dankward Skatepark for the one and only Burly BMX Jam! Above is a video that gives you a look at the highlights from the entire day from the riding to the karaoke that that went down at the after party. You can see riding from guys like Bobbie Altiser, Dan Hylton, Jared Schlesselman, Habo Gutierrez and Glenn Salyers. This is what a proper BMX Jam looks like! It’s such a bummer knowing that we won’t be seeing Glenn blasting airs like he is doing in the end anymore. We’ve included a link to donate to his memorial fund below! Expect part 2 soon…

It was a cloudy day in Burlington, Ia on June 13 but that didn’t stop the migration of BMXers to Southeast Iowa from places like Texas, Chicago, New York, and all other dark corners of the Earth. Special thanks to @skateparkrider (Bobby Parker) for organizing this jam and to @twobraketony (Anthony Loconte), @golden_rod (David Buseman), and @murderbikebmx (Jerrod Glasgow) for taking the time to film. Also, thanks to Logan from @letsroastcycles for sponsoring High Air, Justin Marland for sponsoring King of Box and a special thanks to @sethgz (Seth Garrett) for supplying the music all day.

There has been a Glenn Salyers Memorial Fund setup to help out Glenn’s family in this difficult time: Road2Recovery Foundation

It’s still pretty unreal that we lost Glenn Salyers the other day… Anthony Laconte was sitting on a bunch of amazing footage of Glenn for a new video that they were working on, so he put it together for one last final video from one of BMX’s finest riders. This video is an absolute must see. Rest in Peace, Glenn! BMX will never forget you.

“On Friday, July 17, 2015, we lost a special soul. Glenn Salyers was involved in a motorcycle accident, which had taken his life. When I received the news that Saturday morning, I was in disbelief. Fuck, I’m still in disbelief! Glenn was taken way too soon.
Glenn and I were working on a project together, but that project was unfortunately cut short. I compiled all the clips we had in this short lil edit. Glenn was a fucking shredder! Burly and tech! A rare human! He was so good and so smooth! He was honestly one of my favorite riders…to ride and film with!
You will be missed Glenn! The BMX world has lost a legend! Love you dude!
_RIDE IN PEACE_

For those of you looking to attend the funeral for Glenn Salyers, who passed away the other day in a tragic motorcycle accident, Vital BMX released the details for you to make it to the service. The funeral will be Thursday, July 23rd at 6PM in Kokomo, Indiana. Full details below!

“​Billy Woodfin, a very close friend of Glenn’s, just sent over information regarding Glenn’s funeral. It will be taking place on Thursday (The 23rd) at the following location –

The service will begin at 6:00pm.
If you’re anywhere near the area, please stop by and share some memories about one of the best to ever do it in the BMX world.” – Vital BMX 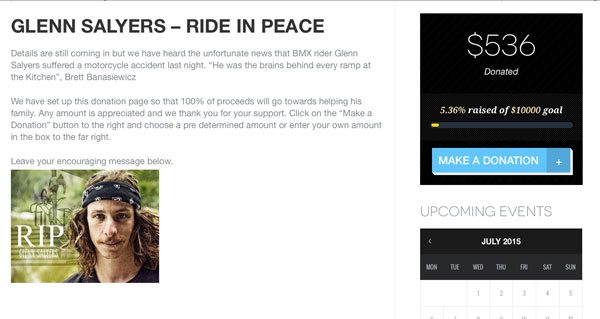 With the news that Glen Salyers passed away in a motorcycle accident getting out around the world, we’re still pretty in shock about the news. The guys over at the Road To Recovery have setup a memorial fundraiser with full proceeds going towards helping out his family in any way possible in this difficult time. If you have a few dollars to spare, please visit this LINK TO DONATE or at the very least past the link along to help spread the word. Glenn was an amazing person on and off his bike and BMX is going to miss him. Rest in Peace, Glenn.

Dave Freimuth is also auctioning off an old jersey of his on EBAY with full proceeds going to the fund as well.

END_OF_DOCUMENT_TOKEN_TO_BE_REPLACED

It’s never easy waking up to the news that a rider has passed away. Today, we woke up to some hard news that Glenn Salyers is no longer with us. There is not a lot of information as to what happened, but from what we heard from a few sources is that he was in a motorcycle accident.

We here at The Union are completely crushed about the news and we are sending our deepest condolences to Glenn’s family and friends. Glenn was an incredibly talented BMX rider that we, and many, many others, are huge fans of. BMX definitely lost a good one today.

Rest in Peace, Glenn! BMX will never forget you.

UPDATE: There has been a memorial fund setup to help out Glenn’s family in this difficult time. You can get more information right here.