Oh man, we’re always pumped to check out a video from the Gnar Barn down in Iowa! Here’s a video Chris Field put together from a recent trip he took out there! This is packed with footage from a real solid crew, with plenty of front brake magic to take in! Hit play because this BMX video is so good.

If you’re looking for a good time, the Team Iowa crew have a party for you… 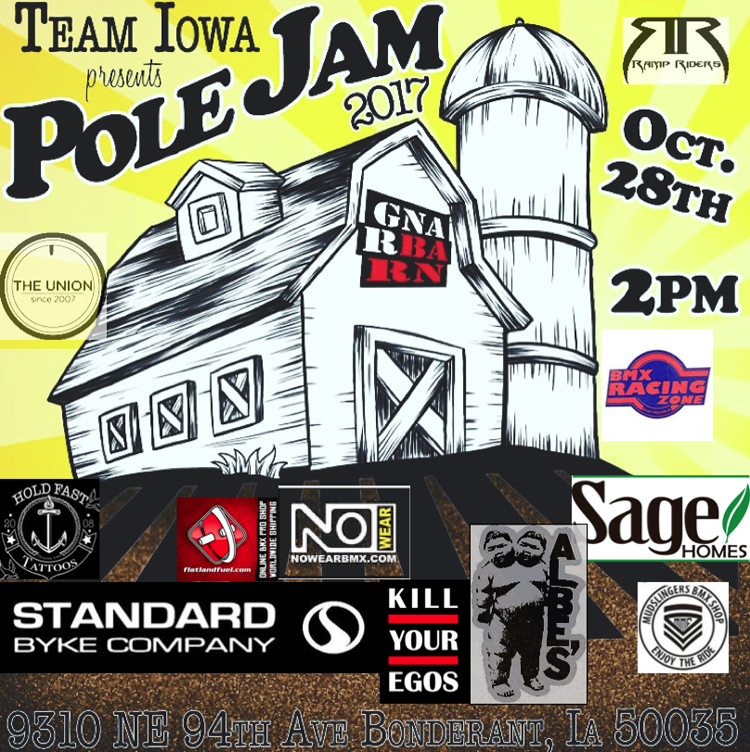 The 2017 Pole Jam at the Gnar Barn is going down on Saturday, October 28th down in Iowa in Bonderant (Just east of Des Moines) and it’s bound to be a super good time. The Gnar Barn will be opened up to everyone to come out, ride, party and camp out if you want. Otherwise there are some hotels and more near by. If you’re over 30 years old, they’re having a 30+ session on Sunday morning as well. You already know there’s going to be plenty of front brake magic going on at the place. If you’re curious what the Gnar Barn is, check out a bunch of Gnar Barn videos right here!

The crew over at Nowear just released their video from the first stop of the 2016 Bring Your Own Bike Series which invaded the Gnar Barn in the middle of Iowa! Hit play to check out a ton of action that went down at the park from flips and tailwhips to crazy front brake magic. It looks like it was another awesome contest. Check it!
END_OF_DOCUMENT_TOKEN_TO_BE_REPLACED 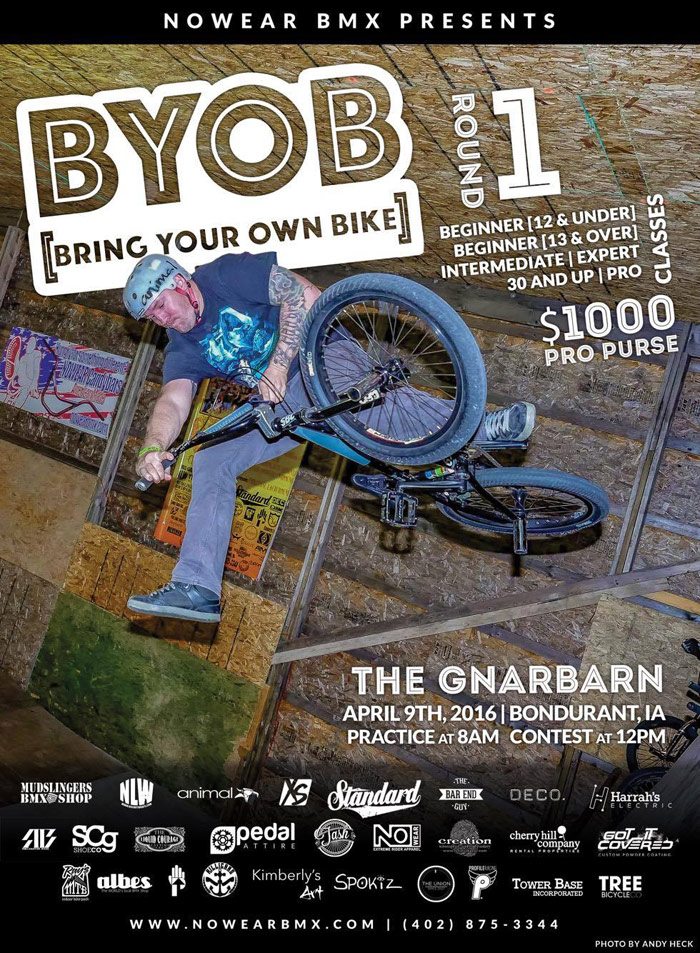 It’s that time of the year again for the Nowear BMX Bring Your Own Bike contest series to kick off! Above is the flyer for Round 1 that will be going down at the Team Iowa Gnar Barn in Boondurant, Iowa on April 9th! You can get the full details and more on the Facebook Event Page! This is bound to be a damn good time, so make plans to be at this!

END_OF_DOCUMENT_TOKEN_TO_BE_REPLACED

Anyone who has ever had the chance to visit the GnarBarn in Iowa knows that it’s one of the Midwest’s finest home ramp setups. Today we were dropped a line by Mike Porter with a link to a BMX video that was filmed over the course of two days of riding inside the barn. There’s brakes, there’s ramps and there’s tons of lip tricks and front brake magic to be seen from Chris Pickard, Matt Stokes, Brad Davis, Mike Porter, David Buseman, Lucas Woodley and Jonny Harnisch in this and it’s nothing short of kickass! Hit play and check this out. If this doesn’t make you want to ride, something is wrong with you!

END_OF_DOCUMENT_TOKEN_TO_BE_REPLACED

When old man Mike Porter sends through a new BMX video, you know you’re in for something good. Mike just rolled over the big 4-0 and to celebrate he hit the Gnar Barn down in Iowa to pull 40 different tricks for this new edit. The tricks might not all be that crazy or difficult, but we’re willing to bet you would have a hard time playing him in a game of B-I-K-E since he could literally go 10 rounds without doing the same trick twice. Take a look!

“No Bangers just 40 different tricks- mostly old school, all with brakes, all at the same place, and a big ass grumpy old man smile on my face. Rock the Night”

END_OF_DOCUMENT_TOKEN_TO_BE_REPLACED

Nowear have released their official video from the first round of the Bring Your Own Bike Series that stopped at at the Gnar Barn in Iowa a few weeks back. This is over 8 minutes of highlights from the young guns all the way up through the pros! Check out the video! After you check this out, make sure you check out our video from the contest as well.

“Round 1 of the Nowear Bring Your Own Bike contest series was nothing short of amazing. Great people having a great time together. Round 1 was at the Team Iowa Gnar Barn hosted by our friend Chris Pickard. Be sure to check the schedule for all the BYOB stops for 2015 on the Nowearbmx.com website.”

The 2015 Nowear Extreme Rider Apparel “Bring Your Own Bike” BMX Series kicked off at the Gnar Barn in Iowa on April 18th! Here’s a video giving you a look at all of the crazy riding that went down in the Expert, Pro and 30+ class! This is banger after banger featuring the likes of Mike DiNello, Bobbie Altiser, Trevor Fitz, Joe Battaglia, Tim Oliver, Karl Hinkley, Mike Porter, Jacob Theim, Dan Nielsen and many, many more! This was one hell of a BMX contest!

Filmed and edited by Kurt Hohberger

There are three more rounds for the series. Check out when and where RIGHT HERE!