Mark Losey has just uploaded the entire “Pro Town: Greenville” BMX video he produced online for everyones viewing pleasure! This video came out back in 2011 right around the time Greenville was a huge BMX scene. Although things have calmed down there over the years, it’s still one of BMX’s most well known places in the world. This video features Dave Mirra, Ryan Nyquist and pretty much every other big name rider that has called the place home over the years, giving you some insight into what it was like living there, along with plenty of amazing riding and hilarious extras. Hit play and take this all in! Rest in Peace, Dave. It’s safe to say this video would likely not have happened without you.

“How did a small town hidden in North Carolina become the epicenter of competitive action sports? And what happens when best friends become each others’ main competition? With 34 pros and 21 Gold Medals, Greenville, North Carolina is unlike any town in any sport. The pros themselves explain how Greenville became so important, and what life is really like in Pro Town USA. Featuring elite action sports athletes including Dave Mirra, Ryan Nyquist, Ryan Guettler, Colin Mackay, Allan Cooke, Colin Winkelmann, Marcus Tooker, Austin Coleman, Josh Perry, Kelly Bolton, and many more. This 44-minute film examines what makes this incredible scene tick, with some of the best action of all time, and access that could only come from a true insider.”

END_OF_DOCUMENT_TOKEN_TO_BE_REPLACED

We have been seeing Charles LittleJohn‘s name popping up more and more lately, and it’s obvious as to just why… The guy is an absolute shredder. DIG just dropped this banger of of a video featuring Charles putting in some serious work out on every spot from rails and ledges to massive stair sets. This guy has that effortless style that makes things look easy… The ender to this video is absolute FIRE. Hit play and enjoy!

“We’re psyched to be able to premiere this new gem from Charles LittleJohn and the camera of Kelly Bolton! Charles is unreal…

“When I first met Charles, I immediately could see he had a gift for riding. He would be casually doing these crazy tricks on a manual pad or a ledge in Venice and it just blew my mind how good he made each trick look. I was also hyped that he’s from my hometown of Venice Beach which if you didn’t know doesn’t have very many locals. Eventually we started filming and I started hitting him up to ride with LAX. The kid is so chill and down to earth that everyone took to him super fast. You can see him get some shine in our recent Weekenz edits, but he’s never had a full web part to himself. Thus the title “The Introduction” this is essentially the first look most people will have on Charles specificly and I couldn’t be more hyped on his first go at it. Thanks to FitBikes, Animal, PeepGame, TheeBlock, OSS for hooking him up and noticed the same thing we did. Cheers!” -Kelly Bolton

Filmed and edited by Kelly Bolton

END_OF_DOCUMENT_TOKEN_TO_BE_REPLACED

We don’t see nearly enough footage from Kelly Bolton these days, but when we do… We’re always beyond stoked! Here’s his latest from the streets of Denton, Texas where he puts his pegs to heavy use on ledges, rails, pole jams and more. Everything from the riding to the filming and editing in this BMX video are on point, so don’t pass this up!

END_OF_DOCUMENT_TOKEN_TO_BE_REPLACED

Here’s a rad video Kelly Bolton put together from a trip to New York City where he cruised around with D-Boy and Tyrone. This is a lot of cruising and jibs, but the film work is on point and well worth a look. This place looks amazing just to see.

“In September of 2014 on a quick trip to NYC, Kelly Bolton rented a city bike and met up with Andy “D Boy” Gregory and Tyrone Williams for a ride around the city. Rain scattered in on the only day they could meet up. Sleeping on the footage for a while, it made its way into a timeline and this was the end product of a laid back day with coast to coast homies.
Music:
Artist: Action Bronson
Song: Easy Rider
Filming/Editing:
Kelly Bolton” – LAX Films

END_OF_DOCUMENT_TOKEN_TO_BE_REPLACED

It’s been a little while since we’ve seen a new video from Kelly freakin’ Bolton (Throwback Thursday?), but today he dropped this new one from some time he spent cruising around Denton, Texas! Needless to say, everything about this video kicks ass from the riding to the film work and song choice. Definitely one BMX video you should hit play on today!

“Kelly Bolton moved to Denton, TX a few weeks ago and steadily solo missions around town spot searching and filming with his wife Angela. From the looks of it Kelly is finding tons of stuff to ride and films every chance he can. Sit back and watch Kelly cruise some of his new local joints.
Music:
Artist: Ten Years After (Alvin Lee)
Song: “I’d Love to Change the World”
Filming:
Kelly & Angela Bolton
Editing:
Kelly Bolton” – LAX Films

END_OF_DOCUMENT_TOKEN_TO_BE_REPLACED 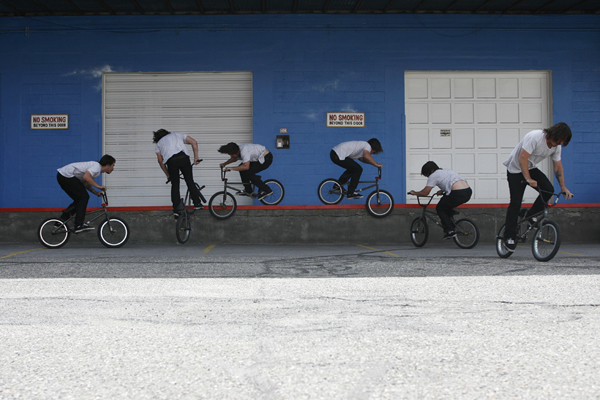 END_OF_DOCUMENT_TOKEN_TO_BE_REPLACED

Nate Richter caught up with Kelly Bolton to follow him around for a day to see how he’s living for this new TCU edit. They start out with some breakfast, make their way to some of the graphic design work Kelly is getting into, touring the DC building, Tip Plus and wrapping things up with a session and some chilling. Based on things, this video has been sitting for a bit since things definitely changed up with DC and Primo since they filmed this. Either way, take a peek.