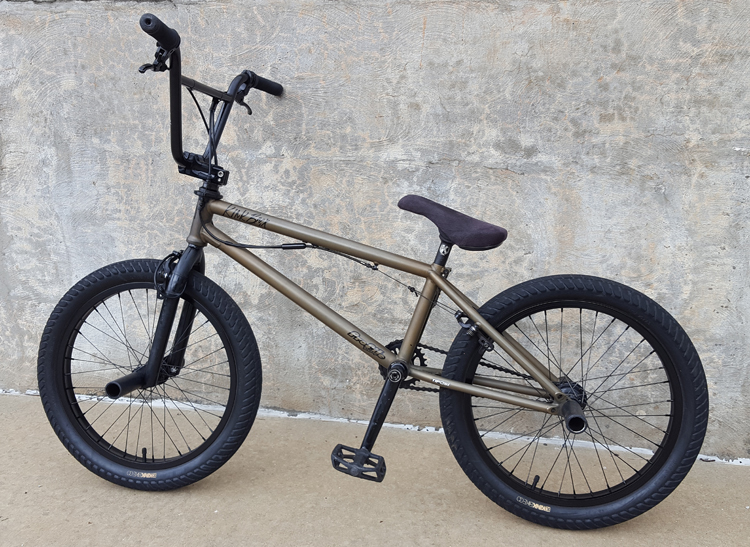 Profile Racing just dropped a new Bike Check with Kent Pearson and his current Kink setup loaded up with Profile and Madera parts. You can check out a parts list and a bunch of photos of the bike on the Profile Racing website!

Gotta love those front brakes… You know Kent puts down some real good riding on this bike!

The latest in the Profile Racing X DIG DIY Series takes us into the Slaughterhouse for a session. This spot might be tucked away and hidden a little bit, but what’s hiding inside is amazing. This place looks like a super good time to ride and there was a bunch of damn good riding that went down during the session! Take a peek!

“Over the course of several sessions, we did our best to document one of the most unique DIY setups in the state of Florida.
Coming out of urban legend, on each visit the Slaughterhouse slowly revealed itself: On our final session we interviewed a squatter living in one of several compartmentalized rooms, honey-combed into this century old warehouse. From his stories, we had finally gotten the true history of the dilapidated old building…and then two weeks later, the Slaughterhouse burnt to the ground.

This is a celebration and memorial to the SL, Profile’s 4th DIY documentary for the 2016 series.
Thanks to Colin Jensen, Brad Campo, and Ben Meyer for the hospitality.
And to Mike Waling for creating, what will forever remain, an Urban, DIY legend.

Filmed and edited by Matt Coplon”

END_OF_DOCUMENT_TOKEN_TO_BE_REPLACED

We’re always beyond pumped when a new Kent Pearson BMX video pops up online! Here’s his latest video for Kink, more specifically their Myriad gyro that he gets a ton of use out of. Hit play to check out some serious front brake magic with some super technical clips that don’t disappoint!

“Kent put in a lot of riding on the Kink Myriad detangler (as well as the rest of the Kink Brake equipment) and had a lot of fun while doing work filming for this edit.

END_OF_DOCUMENT_TOKEN_TO_BE_REPLACED

You don’t even know how excited we were to wake up to an email from Matt Coplon with a link to the new Kent Pearson Profile Racing video inside! Check out Kent’s latest video packed full of street and skatepark front brake magic that was filmed over the course of last year! This one does not disappoint!

“Kent had asked me at the end of 2014 if I’d be interested in editing some clips for him. Although I immediately said yes, the more I thought about it, the more it stressed me out. And then the clips came on a card, via snail mail, wrapped up perfectly in a little pill box. Dialed. Like everything Kent has his hands in.
The pressure was on…
I’ve always had the utmost respect for Kent: I’m super into his riding, style, progression, and love for bmx…the last thing I wanted to do was to not give his footage justice.
So I dove in, slowly…
Here is a cache of clips filmed throughout 2014. We want to thank Kent for years of support: transcending that notion, we’re proud that he’s part of our family here at Profile.
In Kent’s camera bag, there is a mix of SD cards. The one that captured this footage was titled ‘Always on the Move’….Hence the title.
In the end, I’m stoked on the final piece, and actually had quite a good time putting it together.
I hope you enjoy watching as much as I had piecing it together.” -Matt Coplon

END_OF_DOCUMENT_TOKEN_TO_BE_REPLACED

This past weekend, the annual SPoT Roast jam went down at the Skatepark of Tampa in Florida! As always, the night before they throw a bowl jam that is always filled with some dialed riding and good vibes as you can expect when you get a group of BMX riders like this together! Check out what went down in this new edit featuring Chad DeGroot, Seamus McKeon, Dillon Leeper, Matt Coplon, Luiz Pinzon, Spencer Foresman, Steven Nowack, Doug Fines, Kent Pearson, Jay Dalton, Brian Fox, Niles Harper, Billy Woodfin, Riley, Jordan, Jack Straiton, Norman Evans, Dre Tylee and James Lukas,

END_OF_DOCUMENT_TOKEN_TO_BE_REPLACED

Hell yeah! Always pumped when a Tampa Bay Riders edit surfaces! Here’s a new mix from local spots to footage collected during trips Matt Coplon has been on this past year so far! Great people, awesome riding and well worth a watch!