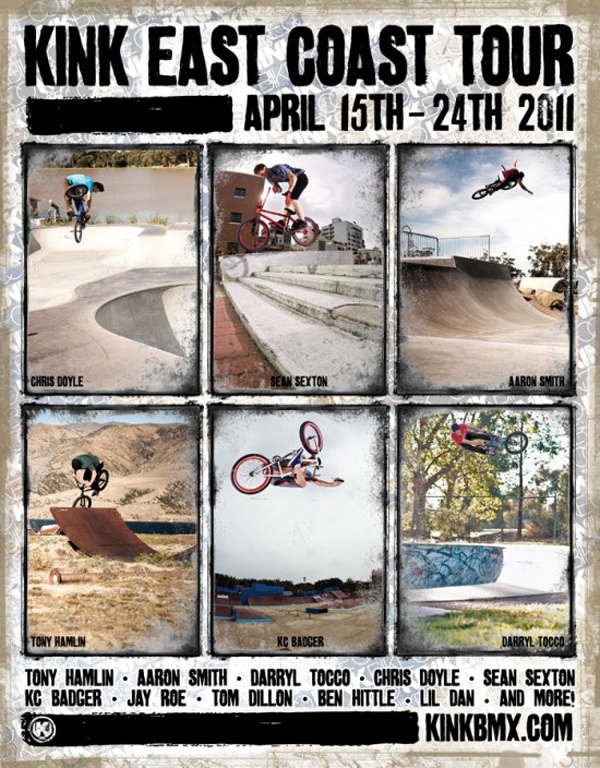 “The 2011 East Coast tour is coming so come out and hang with the Kink Team! Chris Doyle, KC Badger, Tony Hamlin, Darryl Tocco, Aaron Smith, Sean Sexton, Ben Hittle, Lil Dan, and Ride’s new cover boy Tom Dillon will be in attendance. The tour starts April 15 in Albany, NY at C.K. Cycles and heads all the way down to TWO BY FOUR in Jersey, where it ends on April 23. For all the shops, dates, and times click here.” – Kink

Kink dropped this new edit of Tom Dillon shredding some SoCal spots. Double whammy today with the cover and everything. Hell yeah, Tom!

Tony Hamlin put some work in on RASP’s new rail for this new Kink edit. This setup looks so fun and Tony dominates it.

Kink posted up this new edit of Lil’ Dan riding the Kink warehouse, RASP, and some spring street clips. So psyched to see people getting the chance to ride outside again.

Kink posted up this quick clip of Gabe Brooks doing an over bar height ice grind. Holy hell. That’s all I can say about that.

Kink dropped this edit of one of their Russian riders through Toybike. Borya Galas is a new name to me, but it looks like based on this indoor edit that he’s on it. Actually, it seems like all of Russia has been on their BMX game lately. A lot of good edits from that area popping up these days.

Kink dropped a fresh new Ben Hittle edit from his time out in southern California this winter. It blows my mind that Ben isn’t on Kink’s pro team…

Lloyd Wright has been somebody I’ve wanted to get an interview with for quite a while. His riding is really on key and just seemed like an overall good dude. I was talking with Jay from Kink the other day and he said Lloyd was hanging out in the house out in California with them and we figured it would be a good chance to get that interview done. So check out what Lloyd had to say, some photos, and recent edits including the one that dropped yesterday. Don’t forget to leave him some love in the comments too…