“Injury is something that Professional BMX riders have to deal with, it comes with the territory. However what happened to Niki Croft at the London Cycle Show on the 10th of October 2010 was something else entirely.

The third entry in the Relentless Energy Short Stories 2011 short film competition, Good Morning Gravity, has been directed by BMX videographer Richard Forne, and tells the story of Niki’s recovery after an accident that nearly cost him his life, put him in a two day coma, and left his memory shattered.

Beautifully shot, and combining action footage with evocative cinematography, the film is both tragic and uplifting. The film also features a soundtrack composed by Richard and Laurent “Lags” Barnard, guitarist with hardcore punk band, Gallows.

For Richard, the reasons for choosing Niki as a subject were obvious. “his accident affected the entire BMX community and I feel his story is inspirational. His recovery and return to his bike had a huge positive effect on me, and I would like to share that with everyone.”

Relentless Energy Rider, Niki tells the story in his own words. The affect the accident had on him is obvious, as is his focus on not letting it hold him back, in both his riding and his day-to-day life. “If you have to give up everything you love, then it’s not really life is it. You need to be doing these things to be living, that’s especially true with me and BMX. It makes me feel alive.”

Good Morning Gravity is a story that is universal; it talks about confronting the idea of death, of coming to terms with how fragile people really are. It’s also about what people can achieve when they have enough focus and drive, it truly epitomises the Relentless Energy “No half Measures” ethos. A worthy entry for 2011’s Relentless Short Stories Competition.”

I’m not going to lie, this teaser is awesome. Simply because I’ve seen the video and this is one of my favorite clips from the video. You can pick up the video for $10 over on the Orchid site, or anywhere Orchid is sold like the mail-orders.

The Least Most dropped this new video featuring scrap clips from the Orchid video. The video is out now and you can pick it up for $10 from the Orchid site. You know that’s in your budget. You can check out my review of the video here if you actually need convincing? Van Homan, Niki Croft, Brian Hunt, Brian Histand, Dan Conway, Brian Wizmerski and crew all kill the video. Enough said.

Filmed by Ryan Navazio
Edited by Derek Adams (who apparently has done some editing in his day? Haha, some of you will get that)

I’ve said it plenty of times already, and I’ll probably say it a thousand more times. The word that defines Niki Croft the best is beast. Here’s a compilation of a bunch of Niki’s clips that indicate this word.

“I’ve been filming with Niki for 6 years now. Here is a compilation of my favorite clips from the Make’s 3 DVDs and web edits.” – The Make

The Make‘s U.S.A adventure continues. Chicken and Niki Croft on completely different sides of the country in this edit.

A few weeks back, Derek Adams and I were talking about the Orchid On the Horizon we are working on. We started talking about their new DVD that was nearing completion at the time entitled “Footwork”. Derek asked if I would be interested in checking out an advanced copy. There’s no way I could say no with guys like Van Homan, Niki Croft, Brian Hunt and Brian Wizmerski in the line up. Fast forward to a few days ago and I get a package in the mail from Pennsylvania with a DVD enclosed. Opening the package left me wondering what to expect since it came in an old 8 Mile Bonus dvd case with a burned DVD-R inside. It’s BMX, you gotta be ready for humor like that. I tossed in the video and here’s what I thought…
END_OF_DOCUMENT_TOKEN_TO_BE_REPLACED

Here’s the third part from The Make‘s trip around the U.S. Featuring the Count, Chicken, Mike Roche, Niki Croft and Paul Horan. 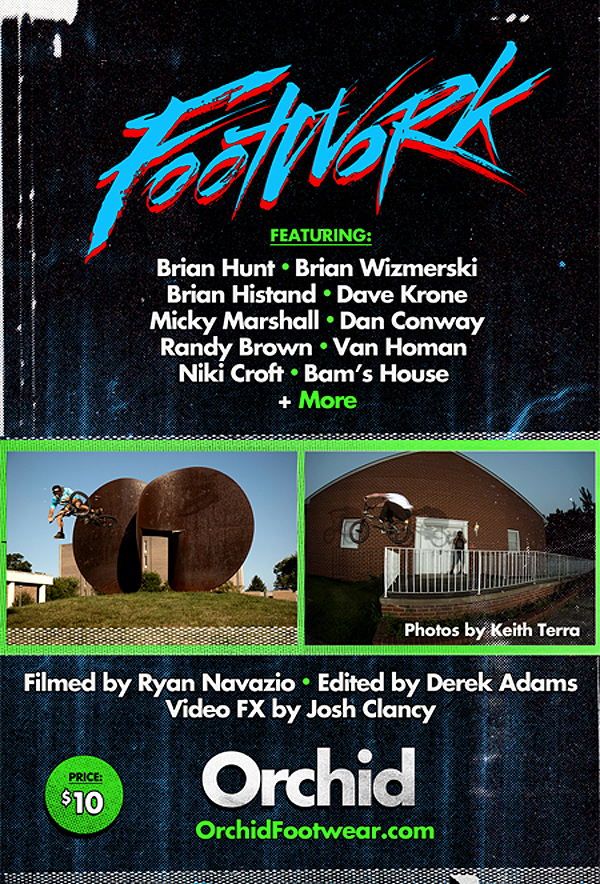 It has been kept fairly quiet, but Orchid have been working on a new DVD. The video just hit duplicators and should be available soon! You can now pre-order the video by hitting their Big Cartel page so that you get a copy when it becomes available. The video is going for $10 which is a deal and a half with the line up for it that you can see above.