Colony BMX coming through with an awesome new video featuring Paulo Sacaki throwing down at a few sets of trails and a bowl down in Brazil! The guys down in Brazil aren’t scared to build them big and Paulo crushes it all along the way! Hit play and enjoy this fresh BMX video loaded with goodness.

“Filmed in the states of Paraná and São Paulo. Paulo chose 4 amazing places, one of which was the place (Anonymous Trail) where he started riding BMX and it was extremely special to be able film there for this video part.

Did you catch the Colony “Take A Ticket” full length video yet? Well, you should have by now! Here’s a raw cut with crashes, b-roll, second angles and more from a bunch of the bangers from the full video. Hit play to watch the team put in some serious work, then go re-watch the full video down below!

END_OF_DOCUMENT_TOKEN_TO_BE_REPLACED

Colony BMX coming through with the Mix Section from their “Take A Ticket” full-length video! This mix is just over 3 minutes of bangers with flips, whips, spins and much, much more from plenty of heavy hitters. Hit play and take it all in, then scroll down to enjoy the full video that is also online!

END_OF_DOCUMENT_TOKEN_TO_BE_REPLACED

Here’s one we’ve been waiting to see! Colony BMX have just released their full-length “Take A Ticket” video online for everyone’s viewing pleasure! It’s not every day we get a 100% park video these days, but it’s a reaaaaally good change of pace from what we see pretty much every day. The Colony squad spent a year stacking clips for this one, and as expected there’s so much crazy riding that you won’t want to miss. The video has Cooper Brownlee behind the film work, so you know this one is easy on the eyes, too! Hit play and take a look at this, because it’s definitely a Must See BMX video! 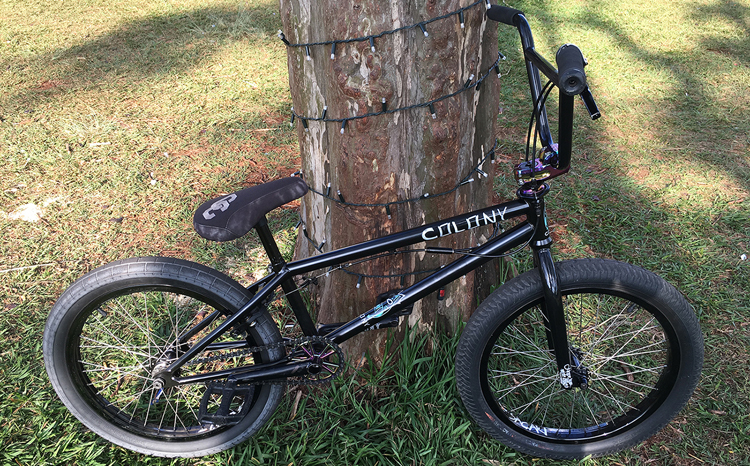 Colony BMX caught up with their connect over in Brazil, Paulo Sacaki to take a closer look at his brand new M8 setup that he’s been putting in work on.There’s a bunch of photos and a full parts list that you can check out over on the Colony website now!

The Colony team was in full force at the 2019 BMX Worlds! Hit play to check out what the guys threw down on the dirt jumps and ramps! Real stoked to see Clint Millar out crushing it as always at the contest with his team!

Colony coming through with a fresh Paulo Saçaki from Brazil!

The crew at Colony coming through with a fresh banger of a video featuring Paulo Saçaki getting down on skateparks and trails down in Brazil! Paulo brings a ton of style and a deep bag of tricks to everything he touches! Hit play and check it out because this kicks ass.

“Paulo Saçaki spent a few days at Sao Paulo filming at Vans Park , Mooca and the famous Caracas Trails where he stacked some amazing clips.

Colony BMX caught up with their connect in Brazil, Paulo SaÇaki, to take a closer look at his current Sweet Tooth setup in this new video Bike Check. The words aren’t in English, but there are sub-titles and there’s a few riding clips mixed in that are damn good, too. Hit that play button and check this dialed unit out!