The third annual SPoT Roast Jam went down on October 29th in Tampa Bay, Florida. Matt Coplon and Jeff Harrington put in some heavy work to get this done proper and it looks like it was nothing short of a good time. Big turn out, good riding and good times. That’s what’s up! Check out this video that Jeff put together from the weekend.

You will NOT want to miss this one…

“Skatepark of Tampa is putting on a BMX contest on Saturday, October 29, 2011. Here is some information on SPoT, the contest and Tampa. Mixed in are some good clips of a small portion of the locals in the area. Its going to be an awesome time! Check tbrbmx.blogspot.com for all the updates.” – Jeff Harrington

Short video with Ryan Clements the General Manager of SkatePark of Tampa talking about some of the history of the park, the editions of the ybor SkatePark of Tampa shop and The Bricks. SPoT has is one of the best ran parks I have ever seen, its always a good vibe. Just a reminder about the BMX contest coming up at SPoT! 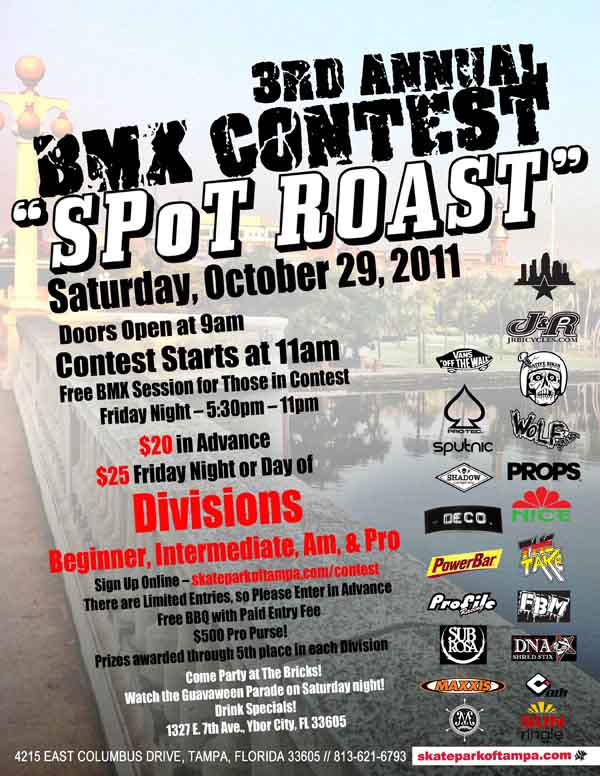 Matt Coplon and The Union contributor Jeff Harrington are throwing a hell of a contest at the Skatepark of Tampa on October 29th. You won’t want to miss this one if you can. Here’s what they have cooking for it so far…

Tom is the kind of rider who absolutely kills it but people seem to always wonder where he is or when his next edit or video part will drop. It sounds like Tom has been hustling real hard to wrap up filming for his section in the Props“Owned” video the last few months while recovering from some injuries and working full-time. I figured it would be a real good time to catch up with him to see what he has been up to and what we can expect from his section in the upcoming release. Let’s see what he had to say…

Matt Coplon sent over some footage from the Skatepark of Tampa’s Salad Bowl Jam he put on. It looks like it was a pretty solid turn out and everyone had a good time. I was surprised when I saw Steve-O at the beginning. He’s looking surprisingly healthy these days.