Vasya Lukyanenko sent through this fresh promo for Flâneur…

Here’s a video we had sent through from Vasya Lukyanenko for his new apparel brand Flaneur that he’s firing up. This is a short but sweet promo that gives us a little taste of what he’s been working on. Looks like things are off to a proper start. You can learn more and see what he has to offer over on be-flaneur.com now!

“BMX riding is the feeling of freedom that we get when we mount a bicycle. We come across countless possibilities of self-expression that cities, streets and spots provide. The only limit is our own imagination. Flâneur is about those who don’t get distracted by an urban turmoil, it is about those who can’t live without it.

Flâneur – is a connoisseur of street life

Be Flaneur! Stay with us!

Film and edit by Pavlo Yushchuk”

If you build it, they will come… Or something like that. Check out what went down during the Red Bull Build The Trick contest.

Here’s one for all you guys that love riding DIY spots. Last summer Vasya Lukyanenko worked with Red Bull to come up with a unique video project that involved having two teams explore the Ukraine, riding street spots and building up unique DIY setups to film on. Here’s the end result that shows what both teams cooked up for riding footage during the trip!

“Travel to Ukraine in search of tricks
Known riders Bruno Hoffmann and Vasya Lukyanenko assembled teams and went on a journey
for new spots and impressions.
The largest BMX journey to Ukraine has been completed! From August 8 to 14, two rider teams
fought for victory in the Red Bull Build The Trick, traveling the country in search of locations for cool stunts, creating new spots. At the head of the teams were Red Bull athletes Bruno
Hoffmann from Germany and Ukrainian Vasya Lukyanenko, whose team celebrated the victory.

“I consider this project one of the most interesting and useful for the BMX-scene in the history
of the development of this discipline in Ukraine. We have invited our country to one of the best
street riders in the world. In addition, we gave the chance to other riders to spend a week with
him on a trip, and also built new spots on which local riders are already riding,” Vasya
Lukyanenko said.
The peculiarity of the contest is that the team of winners was determined by a set of tasks:
complex, medium complexity and entertainment. To earn points, riders visited Kiev, Dnipro and
Odessa, where they showed their skills not only at the found points, but also on those that they
had to create by themselves.

“I really liked the spot our team built in Kiev. It was a kicker on a tornado. Many guys did not dare to jump, but those who jumped on the wall looked pretty impressive.” – continued Vasya Lukyanenko.
Each team had five participants. In addition to Vasya and Bruno, eight other riders from
different cities of Ukraine went on a trip. Six of them received invitations from the organizers:
Socrates Maslov and Anton Kozlovsky were represented by Kyiv, Andriy Gaevsky – Kamenets-
Podilsky, Anton Makarenko – Kramatorsk, Dmitry Zurabjants – Dnipro, and Artem Bachechey –
Odessa.

Two more riders were selected through a competition in social networks, where everyone
could put their video with tricks and win the right to join the teams. They were Andriy Piskun
from Kyiv and Artem Prokopenko from the Dnipro River.
"It was a very difficult and interesting project. Many forces went to the construction of spots,relocations and the organization of the entire process. But we did it for ourselves and therefore were satisfied with the results, "Vasy Lukyanenko summed up the results.
Watch the video as it was!“

Vasya Lukyanenko giving us a look at what he got into during a recent trip around Europe!

We’re always stoked to see what Vasya Lukyanenko is getting into. Here’s a rad video that he put together from a trip while exploring street spots and skateparks around Europe. Not a ton of details to come along with this one, but we can tell you the riding is real solid and the film work is clean. Can’t go wrong with that combo!

Vasya Lukyanenko coming through with a fresh batch of clips that he has filmed over the course of the summer for your viewing pleasure! Vasya has been bouncing around Europe, cruising street spots from Spain, to the Ukraine, Latvia and the Netherlands stacking clips. Check out what he has cooked up for you below!

Thanks to Kunstform.org for the new bike.
Thanks for filming: Moritz, Pavlo, Sokrat, Yarik.” 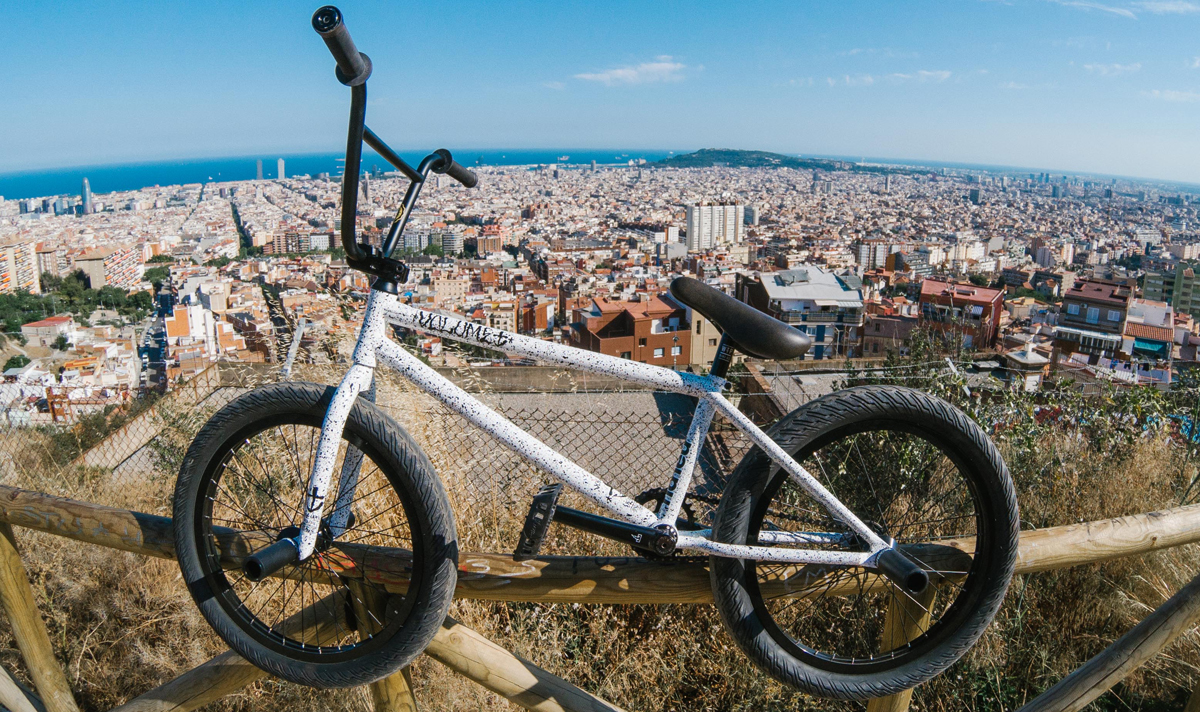 It’s that time of the year when the weather starts heating up and the bikes start getting put through some heavy work. Vasya Lukyanenko just dialed in a brand new Volume Bikes setup decked out with parts from Odyssey, Mental BMX and more! Take a closer look at the full parts list and photos of the bike below!

What do you think of Vasya’s setup? Let us know in the comments below!

Red Bull dropped a new video, along with some photos and words from a trip to Western Ukraine that Vasya Lukyanenko took to explore some untapped spots! Hit play on the video to check out what he got into, then check out a story from the trip below!

“A few words about our trip. The idea come up in the beginning of the year, when I watched the video, which shows attractions of Ukraine, what can be proud of our country. I thought it would be interesting to do a project that combine significant places of Ukraine and riding BMX. I put together a list of 8 places, where no one has ever ridden in Ukraine. In this list were 4 Castle, a monument to the dead loop Nesterov, Radio Locations station Pamir, arch-bridge in the village of Plebanovka. All the spots and the idea of ​​riding on them initially showed the photographer Sergey Ilyin, he enjoyed it, and we started preparation. As partners, we have attracted Winner Automotive company and brand that they represent – Jaguar. We were given a car Jaguar F-Pace, and covered the transportation costs.

For hedging, in case of “not ridebly” spots I decided to build a small kicker, which would allow to ride on the flat, or even wider use different spots. We built it together with Sergei at his home a few days before departure. Departure day long delayed for various reasons and we went on 25 October. 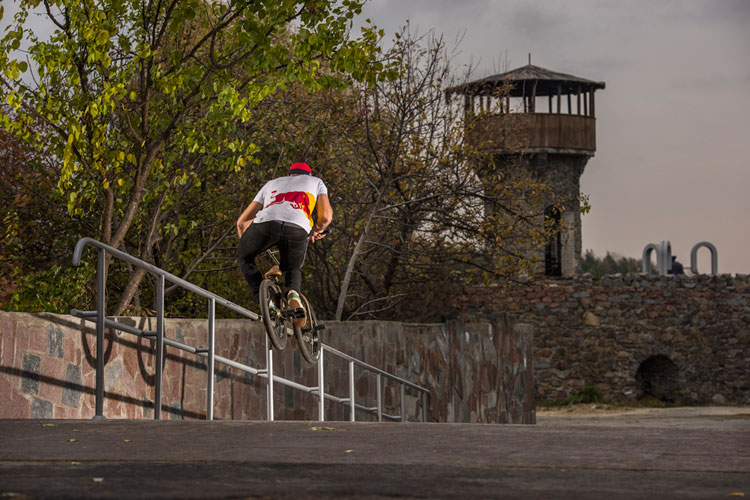 I was the best route, which was the best of all the places to visit. We went to the first location, which was near the quarry Korostyshiv. There are places for skiing, we have not found and decided to move on.

Second dispute became the city Novograd Volyn and local landmark – the remains of the fortress Zvyagel. Spot was there not particularly rich in possibilities. We took a few tricks on the rails and leave this spot. Then rain started and we had to go further. 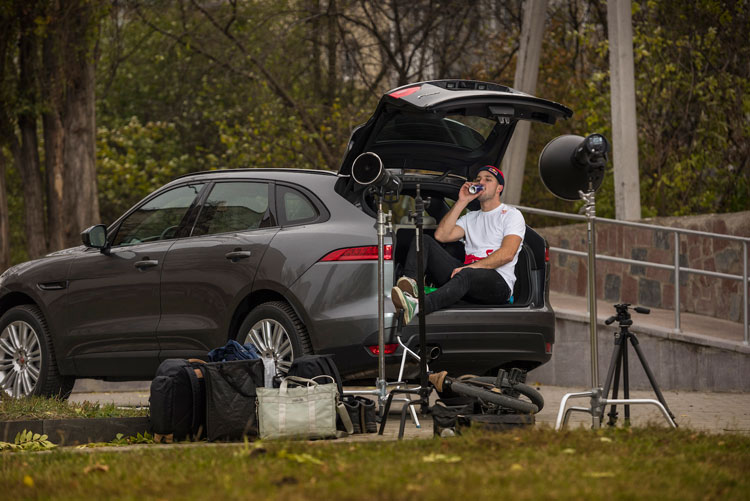 We moved in the direction of the city of Rivne. After spending the night on the highway in the morning we decided to call on the basalt quarry, which has offered Sergey. The weather was too cloudy and the road was a little rain. We arrived at the place, it struck us of size and beauty. With this quarry would make a great park, not worse than the American Grand Canyon!

We have traveled all career in that area, and stopped at the first, which hit. We only had a few hours before browning and we took a few good shots.

The main problem or difficulty we had is that we did not check locations before filming and we did not know will allow us to spots to ride on them. And so it happened, a lot of time spent on searching for spots and the road to them. But it was also a plus, because we did not know what awaits us at the locations. Radar Pamir we postponed for later, because it was quite far from our target cities. After the quarry, we went in the direction of Lviv, where we spent the night. In the morning we went to the Loop. At this spot we went to work, we tried to dig a huge pit that is not allowed to drive up to it. We spent two hours digging the ditch and left this venture. Spot the one hand a very interesting and unusual, and on the other – are not allowed to get up to speed, that would do tricks on it. We squeeze out of it what we could, got one action and lifestyle shots and drove on. 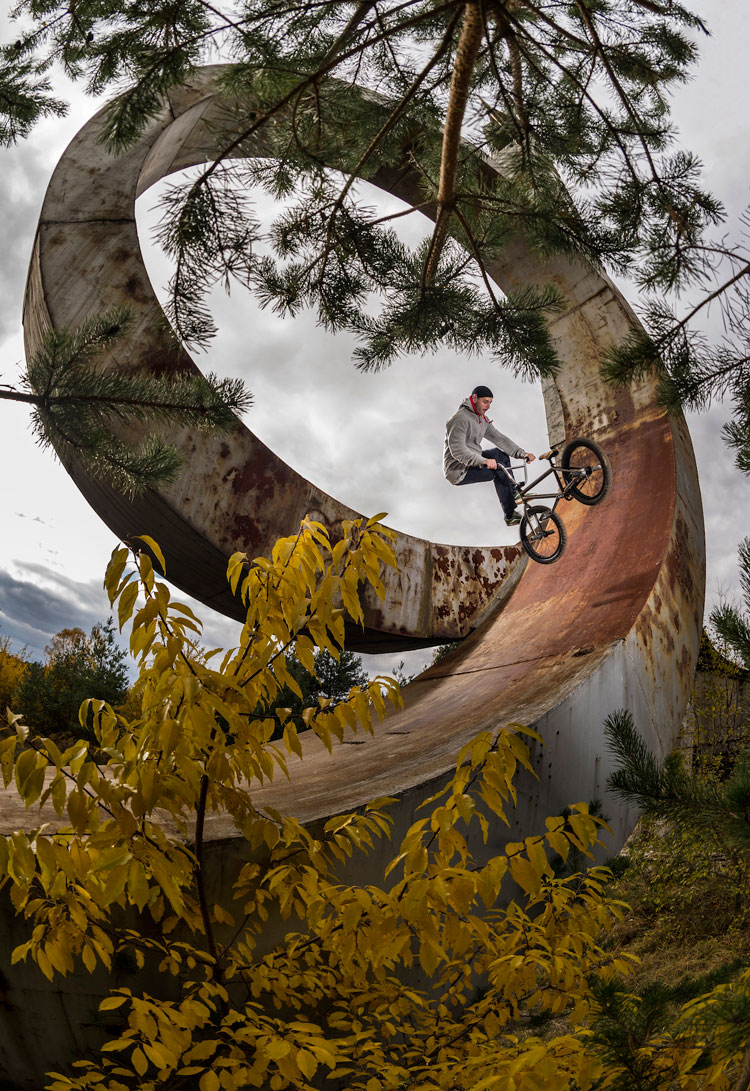 Next was an abandoned castle Pidhirtsi. There we were shooting in the dark. 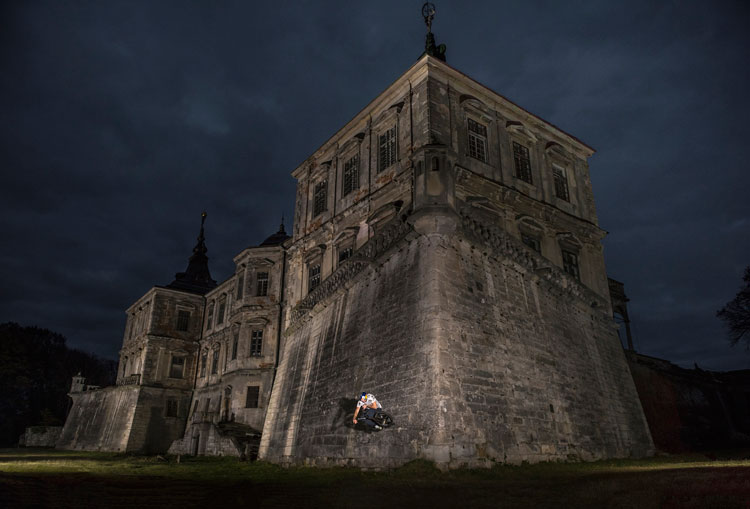 Before filming had to run, explore location, entrances to them and what they can do.
After we moved to the next target, which was an arched bridge in the village of Plebanovka. But the villages with the same name in Ukraine as it turned three and we missed our village at 280 km or 4 hours and drive by there the roads. Bridge, we also decided to leave the next project in the spring we will go for it!

Next was Kamenetz-Podolsk and the local fortress. The weather was great and we took further action shots of a beautiful castle. 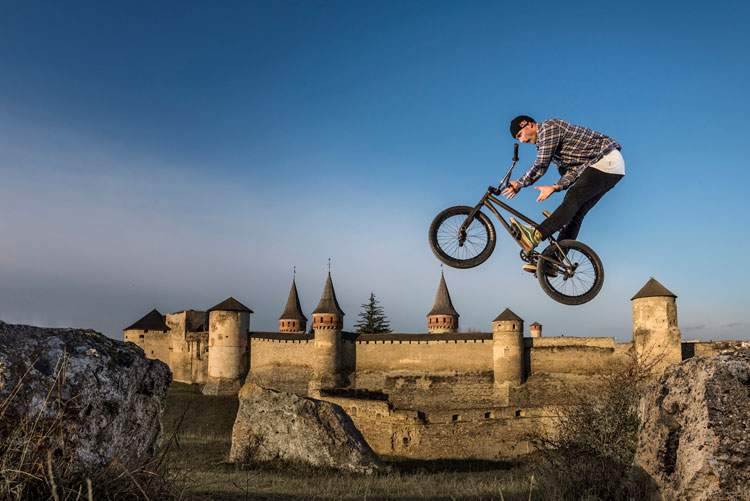 A lot of time was spent on the placement of the equipment, collecting, moving and shooting itself usually takes up to an hour – two times. The next day we went in the side of Kiev and stopped on the way to another arch bridge in Novograd Volynsk but have not found it possible to ride, as well as in another private castle – Radomysl.

Total we had 5 days, 5 spots, 2,200 km, 3 people, 1 bmx, large amount of equipment. At other locations on our list we could not get any action photos.

Huge thanks to Red Bull for making this happened and all people who was involved and helped us with organization. Full article with more photos and backstage video will run soon! Stay tuned!” 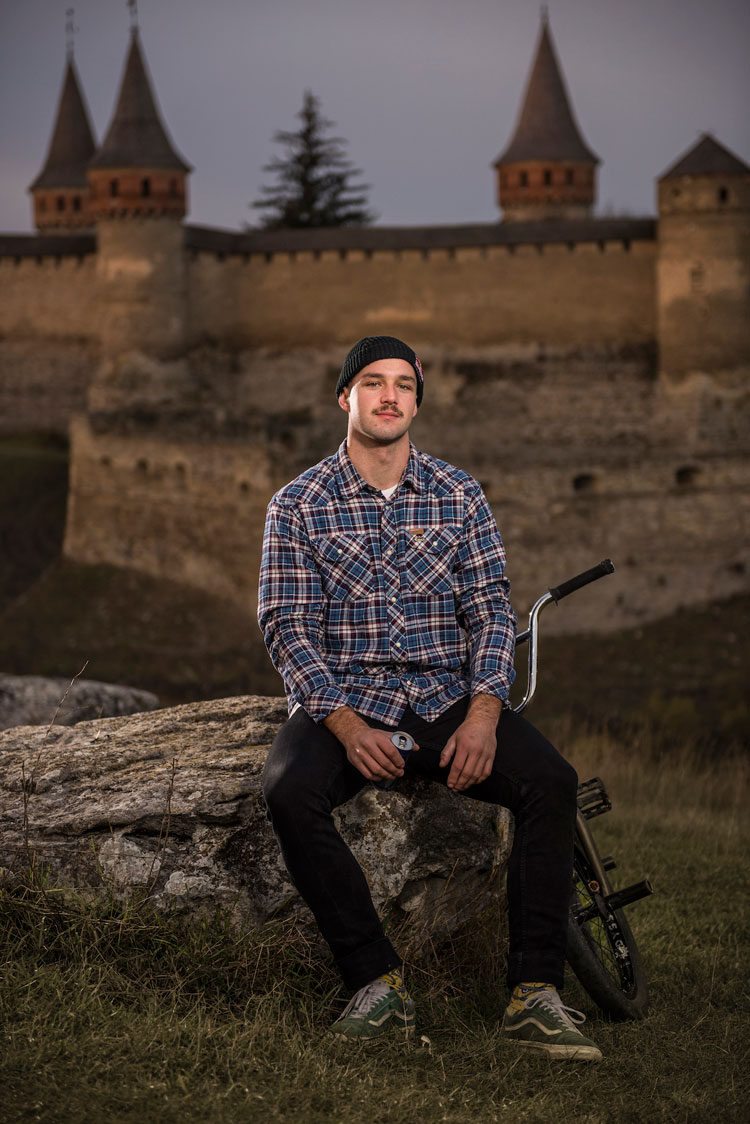 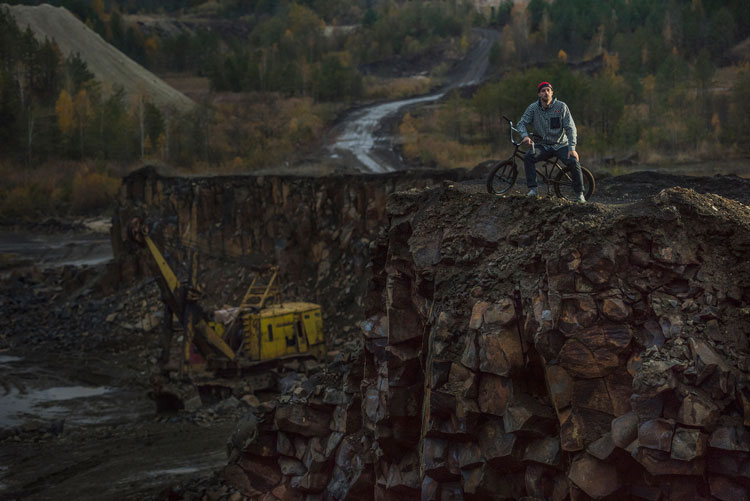 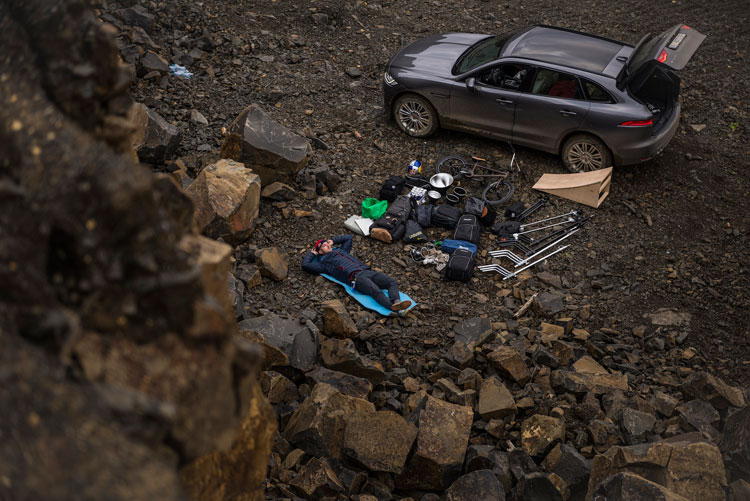 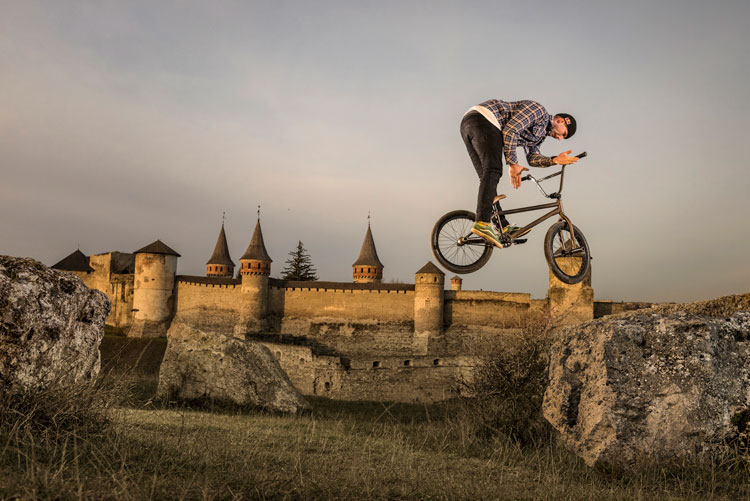 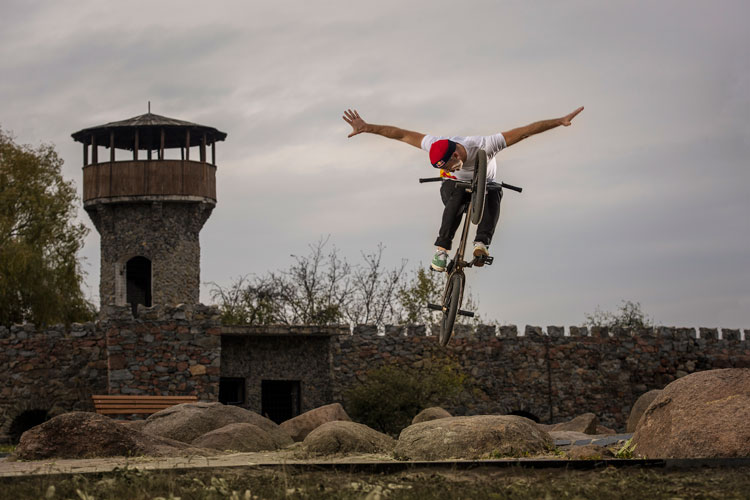 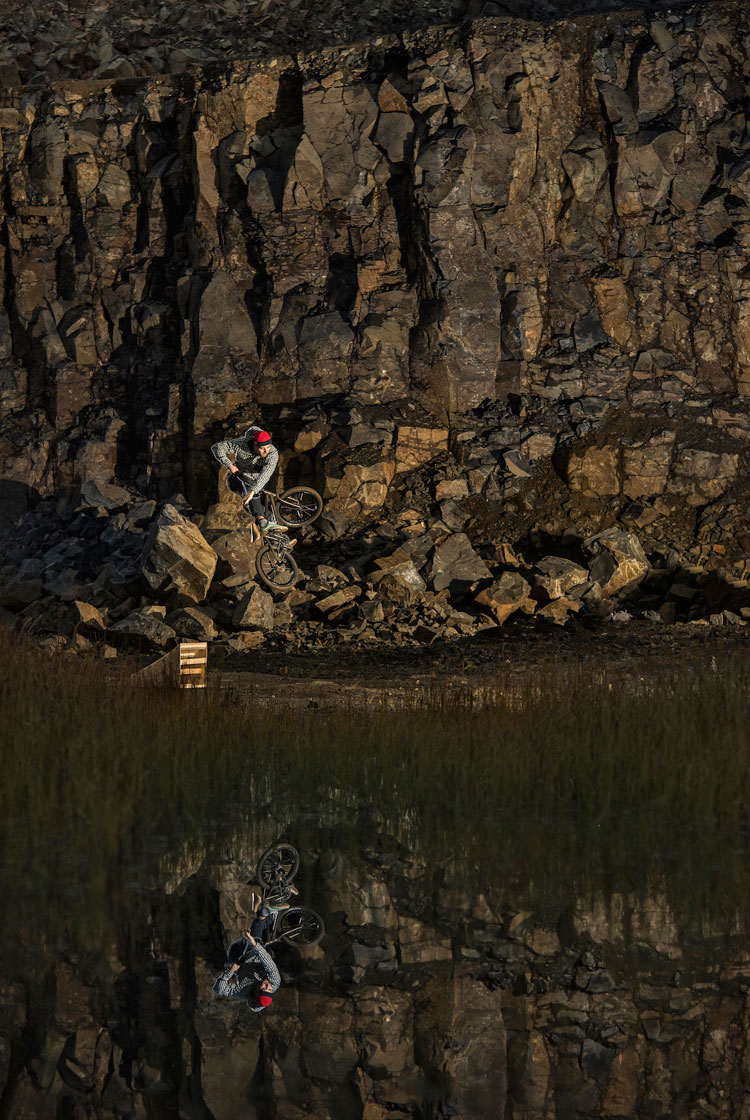 Vasya Lukyanenko coming through with a fresh batch of clips that were just waiting to be seen on his hard drive. It’s safe to say that Vasya has been on the move lately and it has taken him to a ton of great spots. You should already know that Vasya brought the grinds to the party, too. Check it!

Vasya Lukyanenko just hit us with a link to his latest BMX video for you to check out. This short but sweet video is a promo for the Atlas Weekend music festival going down in Kiev, Ukraine, but it’s really just some real solid riding clips from Vasya. Hit play and take a peek!